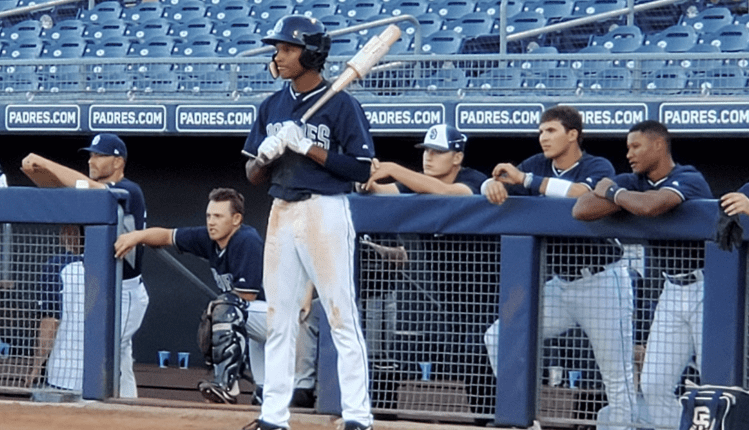 The search for the next big thing is a constant aspect of life these days. It doesn’t matter if that’s in stocks, music, science, sports, or something else, the search is a neverending journey. That sentiment especially rings true in our fantasy baseball world and even more so in dynasty leagues. Acquiring a player before they’re a fantasy force is one of several aspects of the fantasy game that separates the champs from the challengers. Now, the prospect we’re talking about today isn’t a sleeper or a name nobody has heard of. This article is about a prospect that is beginning to sneak his way into top-10 overall dynasty prospect discussions. But just how great can Padres shortstop CJ Abrams become in dynasty leagues?

How Good Can CJ Abrams Be In Fantasy?

The short answer is really damn good. The point of this article isn’t to introduce you to CJ Abrams. If you follow baseball and have even basic prospect knowledge, you know who Abrams is. You likely also know that he’s one of the top rising prospects from the 2019 MLB draft and one that is shooting up fantasy prospect rankings quicker than he can swipe second base. Which is pretty quick by the way as Abrams is one of the fastest players in baseball at any level. No, the purpose of this article is to really dig into Abrams and discuss why he’s a fantasy superstar in the making.

Already the owners of arguably the top farm system in baseball, the San Diego Padres sat down for the 2019 draft with the 6th overall pick and a dynamic draft pool to dip their toes in with plenty of elite talent projected to go in the top half of the first round, especially with position prospects. After Adley Rutschman, Bobby Witt Jr, Andrew Vaughn, JJ Bleday, and Riley Greene were selected, San Diego stayed true to their modus operandi over the last several seasons and drafted CJ Abrams, an electric shortstop prospect from Blessed Trinity High School in Roswell, Georgia. The pick shocked nobody as Abrams was considered by many to be one of the 5-7 best players in the draft and the second-best high school talent behind Witt.

Following the draft, the Padres assigned Abrams to the Rookie-level Arizona League. If only those pitchers knew about the world of pain they were about to be in and the countless headaches Abrams was going to provide, both at the plate and in the field. In 32 games, Abrams slashed .401/.442/.662 with 12 doubles, eight triples, three home runs, and 14 steals across 156 plate appearances with a tidy 9.0% walk rate.

From June 18th until August 3rd, Abrams was an absolute nightmare for Arizona League pitchers and a major draw for fans and scouts alike. Former Prospects Live co-founder and current Minnesota Twins pro scout, Jason Pennini, ranked Abrams as the 2nd best player in the Arizona League last season, barely behind Marco Luciano of the San Francisco Giants. And trust me, Jason basically lived at the Arizona League last season and is one of the best scouting minds around. He knows what he’s talking about.

Following all of that utter domination, San Diego bumped Abrams to the Single-A Midwest League for a pair of games where he racked up two hits, a double, and a steal. All it took was those 34 total games for Abrams to prove why he was one of the most dynamic amateur players in the country and why he has the chance to develop into a player that we all fight over in the early rounds on draft day in our fantasy leagues down the road. Abrams truly looks like a fantasy superstar in the making.

There are several reasons why I said that last sentence above. But if you could only pick one of CJ Abrams tools to use in creating the ultimate baseball prospect, it would be his speed and athleticism. Simply put, Abrams is one of the fastest and most athletic prospects in the minors. Heck, in all of baseball for that matter. You don’t luck into eight triples in 32 games. That’s one triple every four freaking games for crying out loud. It doesn’t matter how old you are or the level of competition you’re facing, you have to be able to flat out fly to have that kind of triples pace, and Abrams can do just that.

His speed wasn’t just evident in all those triples either. Abrams was given the green light early and often last season, attempting 20 steals in 32 games. This combination of raw speed and exceptional athleticism is rare and makes him one of the most exciting players in baseball. Depending on where you look and who you talk to, some will grade Abrams’ speed as a 70, others at 80. His home to first times have been clocked in the 3.90-4.00 range, which puts him firmly on that 70/80 scouting threshold. According to Baseball America, 80-grade speed is 3.90 home to first for left-handers and 70-grade is 4.00.

But there’s more to stealing bases than just pure speed. Yes, obviously that is a major part of the equation but we’ve seen many prospects stolen base totals suppressed due to lack of baserunning acumen. You need to know when to steal, how to read pitcher’s movements, and have a quick first step if you want to fully maximize your speed and steal a ton of bases. All indications so far point to Abrams having those qualities. This is a 40-plus stolen base threat in the making.

So, Abrams has a ton of speed, but so what? Jarrod Dyson and Billy Hamilton have a ton of speed as well, but they aren’t fantasy stars. That’s 100% correct. I’m not calling Abrams a future fantasy superstar solely due to his speed. He has the tools to stand out at the plate as well. We’ll get to his power in a second, but first, let’s discuss the hit tool.

From the left side of the plate, Abrams has a compact and smooth swing with plenty of bat speed. He starts with his weight back and hands quiet in front of his back shoulder. Since his weight is already shifted back a bit, there’s not a ton of additional load once he begins his pre-pitch setup. His hand shift back slightly as his body crouches in towards the plate a tad. Abrams won’t use a leg kick, rather lifting his front foot every so slightly into a stride towards tha pitcher. At that same time, Abrams weight shifts back forward and his hands explode through the zone with a direct path to the ball. Every part of his swing is quick and rhythmic without any additional noise.

CJ ABRAMS HOME RUN!!! 3-3. You can hear his teammates staying quiet for when he gets to the dugout #ProspectOne @CJAbrams01 pic.twitter.com/cu0B4GJAoM

Simply put, Abrams has a beautiful swing. In addition to the plus bat speed I referenced above, Abrams has shown exceptional barrel control with a great feel for the strike zone. He rarely chases junk outside the zone and can cover the entire zone, spraying line drives all over the field. He’s also shown the ability to work plenty of walks as well. With his contact skills, approach, and speed, it’s very easy to project his future as a top of the order dynamo. I’d grade his hit tool as at least plus and maybe even 65-grade. This looks like a future .300-plus hitter to me.

Alright, now we get to the power. This is the X-factor when it comes to CJ Abrams and just how much of a fantasy force he can become. It’s been on more than one occasion that someone on social media has said to me that Abrams has minimal power or none at all. That is 110% false. Totally and unfathomably incorrect. Shame on you. SHAME! While it’s true that Abrams isn’t a 30-homer, middle of the order force in the making, he definitely has some raw power and projects to add even more as he matures physically.

Currently listed at 6’2/185, Abrams still has some physical projection left on his frame and at 19 years old, it wouldn’t surprise me if he added a little bit of bulk before his development is through. As mentioned above, Abrams has plus or better contact skills with plus bat speed and the knack for barrelling pitches up. Abrams hits the ball incredibly hard, but that is more in the line-drive variety than over the fence shots for now. Keywords there are “for now.”

Abrams has displayed at least average raw power in batting practice, especially to his pull side. There’s also a slight uppercut nature to his swing path. As he matures and adds some bulk, I’m expecting some of those deep gap shots to travel a bit further and clear the outfield fence. At the moment, I’d grade Abrams’ power as 50-raw, 40-game, with the potential for more moving forward.

The below image shows the top estimated flyball distances for teenage prospects in 2019, courtesy of Minor Graphs on Prospects Live. As you can see, Abrams is already giving us a taste of the type of power he’s capable of.

Abrams was ahead of many power bats, including Nolan Gorman who has garnered some 80-grades on his power from some scouts/analysts. Is Abrams going to hit more dingers than Gorman moving forward? Not likely. However, we’re definitely not talking about some “slap dick” prospect here. If everything I mentioned above comes to fruition, I fully believe there’s 20-homer pop here.

With the title of this article including the words “Fantasy superstar”, I’m sure you can figure out where I’m going with this. I believe we’re looking at the next elite speedster to grace our presence in the Majors that can also make a significant impact with the bat. With Abrams’ hit/power/speed combination, some peak seasons in the .300+/20/40 range are within the realm of possibility. This is a top-10 dynasty prospect with a fantasy first-round ceiling. We’ve seen how highly Trea Turner has been valued in fantasy and his annually lofty ADP. Well, Abrams is next.

The real question is where will Abrams slot on the diamond? While he plays an adequate shortstop thanks to his athleticism, the Padres already have Fernando Tatis Jr manning that spot at the Major League level. It’s likely that Abrams will have to move off of shortstop due to that superstar-caliber road black and slide over to second back or back to center field. Regardless of his defensive position, Abrams is fantasy gold in the making folks.

Top Fantasy Performances: These Players Have Won Leagues For Me