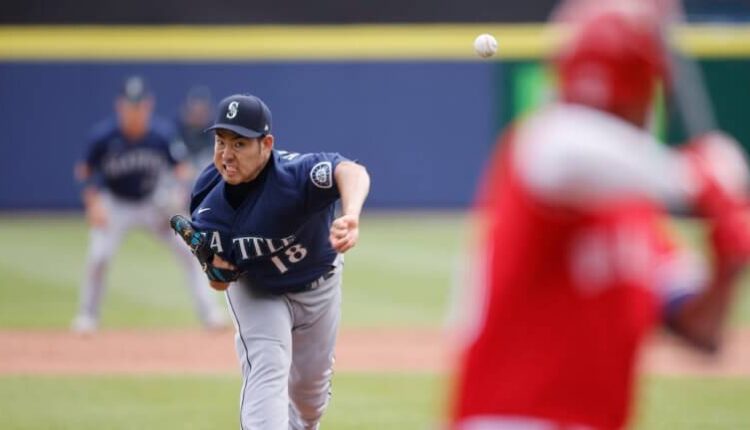 With half of the real-life and fantasy season in the books, we head into the All-Star break. At this point, fantasy managers likely have an idea where they fall in the rotisserie standings and their team’s strengths/weaknesses. You can read the other 13 buy or sell topics here and see if those trends have shifted or not. This week, we’ll cover a sleeper starting pitcher that’s breaking out in 2021 plus an often injured Rockies’ hitter that is producing since returning from yet another injury.

From 2019 to 2021, Yusei Kikuchi adjusted the pitch mix by using a cutter more, a brand new pitch in 2020 and 2021. When looking at 2020 and 2021, Kikuchi’s four-seamer velocity jumped and remained at or above 95 mph compared to 92.5 mph in 2019. That leap in his velocity also translated into an increase in swinging-strike rate and improved wOBA allowed.

Interestingly, Kikuchi’s velocity on his slider dropped from 86 mph in 2019 to just above 83 mph in 2020 and 2021. However, it still rates as one of Kikuchi’s better whiff pitches. So, what changed for Kikuchi? Let’s dive a bit into the narrative and news.

Back in 2015, when Jerry Dipoto took over the general manager role for the Mariners, I recall him mentioning an emphasis on “controlling the strike zone.” Now that we’re 5-6 years down the line, we notice that trend for the most part with their players in plate discipline and K-BB%. Coming to the majors, Kikuchi graded as having below-average command yet average to above-average stuff. Kikuchi’s 16.9% K-BB% is a career-high with a drastic improvement in strikeout rate compared to 2019. Although the walk rate jumped, it decreased below 10.3% back in 2020.

After 2019, Kikuchi consulted with Driveline Baseball to adjust his mechanics per an article in Lookout Landing. Given the odd and shortened 2020 season, it seems that it took Kikuchi some time to figure out what works to develop more consistency. When we hear and read about mechanical adjustments for pitchers with positive results, then I tend to buy in more than sell these changes.

Should We Buy or Sell Kikuchi?

Given Kikuchi’s low .221 BABIP and decently high 82.9% LOB%, it appears the ratios will likely regress a bit. Most of the ERA estimators expect Kikuchi’s ERA to rise to the low 4.00’s. However, his 3.43 xFIP and 3.78 SIERA give us reasons for optimism. If Kikuchi can maintain an ERA around 3.70 to 3.80 for the rest of the season, that’s still good value given that his 250 NFBC ADP put him as a 17th round pick for 15-team leagues.

Furthermore, all of Kikuchi’s pitches gradually improved, with all four of them boasting a negative Run-Value. Another positive involves the adjustments made in his arsenal and effectiveness, evidenced by the increased swinging-strike rates and wOBA allowed. Even in quality start leagues, Kikuchi has 11 quality starts (73%), and six of them with two or fewer earned runs. Kudos to you if you found Kikuchi on the waiver wire in dynasty leagues after a brutal start to his MLB career. In redraft leagues, I would consider buying high on Kikuchi rather than selling the changes he made so far in 2021 and throughout his career.

Sorry Eric Cross, but Brendan Rodgers, not Garrett Hampson, is producing for the Rockies. I’m kidding since Hampson is hitting .260 with six home runs, 38 runs, 21 RBI, and 12 steals in 273 plate appearances. Hampson ranks 5th with total plate appearances amongst Rockies hitters behind the established hitters.

Back to Brendan Rodgers. One of the storylines for Rodgers involves the injury history. According to Derek Rhoads Injury Dashboard, Rodgers missed 125 days on two occurrences across 2019 and 2020. In 2021, Rodgers missed about a month and a half with a hamstring injury.

Brendan Rodgers often held an average to below-average strikeout rate. That is settling in with an 18.6% strikeout rate and a 7.9% walk rate in 2021. Rodgers boasts above-average contact rates in the zone and overall with an 88.3% Z-Contact% and 82% Contact%. He hits a bit too many ground balls than we would like at 49.5%, although he sprays the ball around a bit.

As a prospect, Rodgers rated as having average to above-average power with an above-average hit tool. We see some of those tools translate with the contact rate and average power, evidenced by a 7.1% barrel rate and 43.4% hard-hit rate. Unfortunately, Rodgers doesn’t qualify in the percentile rankings, but we can tell it’s not great. Even in average exit velocity on FB/LD, Rodgers boasts a 93.1 mph exit velocity (No. 213) amongst qualified hitters with at least 50 batted ball events. Hitters that rank near Rodgers include Yadier Molina, Yu Chang, and Jace Peterson.

Should We Buy or Sell Brendan Rodgers?

I’m fine being late to the party if Rodgers remains healthy for the rest of the 2021 season. If that’s the case, it will help me buy into Rodgers more heading in 2022. In last week’s buy or sell article discussing Nick Solak, I noted Solak’s contact-oriented approach with average to below-average barrel rates. Solak’s profile reminds us of Brendan Rodgers’ profile that is contact-oriented with average barrel rates, meaning don’t go out of your way to acquire or buy Rodgers in 2021 redraft leagues.