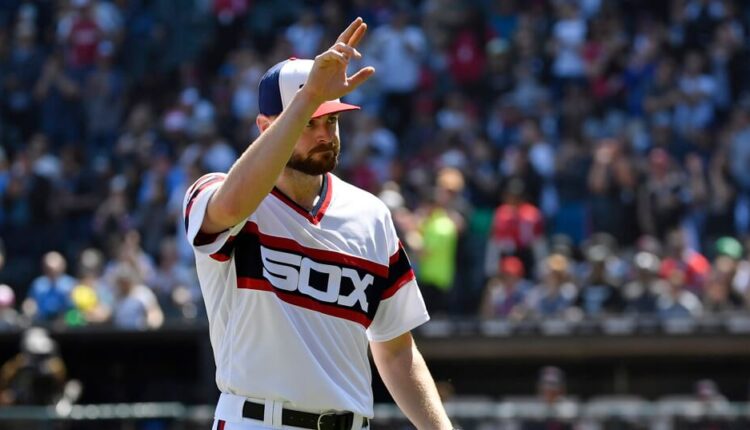 With the weather heating up, the runs and home runs per plate appearance have increased in June. After a brutal April for offenses, the numbers boomed in May and June. Although we’re focusing on buying or selling pitchers, it’s a trend to monitor, aligning with the idea that it’s risky to stream pitchers. 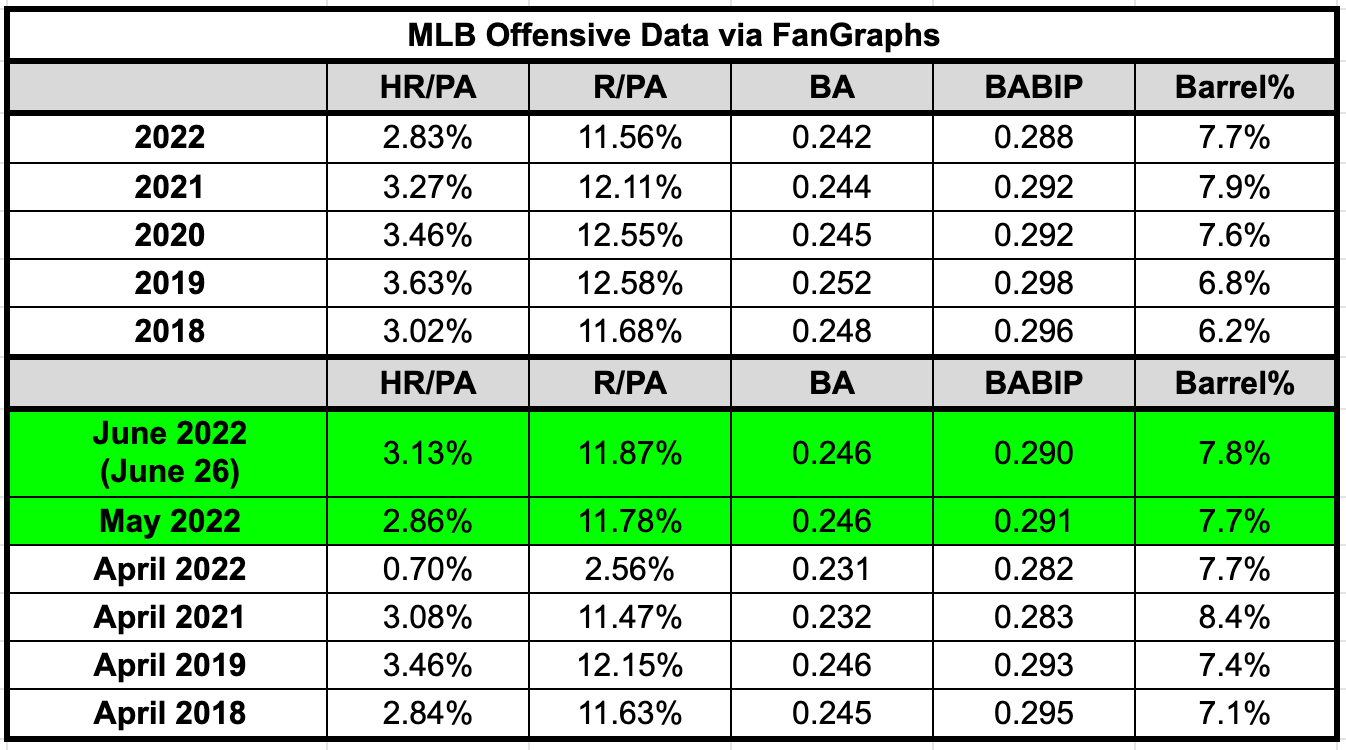 In this week’s buy or sell installment, we have a pitcher drafted like an ace in Lucas Giolito and a recent spicy streamer in David Peterson. Like Trevor Rogers, Giolito remains a hot name in the fantasy baseball community due to his struggles. As usual, we’ll look at the underlying skills to see whether we should buy or sell these two starting pitchers for the rest of 2022.

The White Sox ace went in an interesting NFBC ADP range of Aaron Nola, Lucas Giolito, Julio Urías, and Sandy Alcantara. Unfortunately, Giolito has performed the worst against the four aces, with a 5.19 ERA and 1.53 WHIP in 69.1 innings. Giolito’s ratios remain near career worsts since 2018. On the surface, Giolito’s .360 BABIP looks brutal versus a career BABIP of .272. 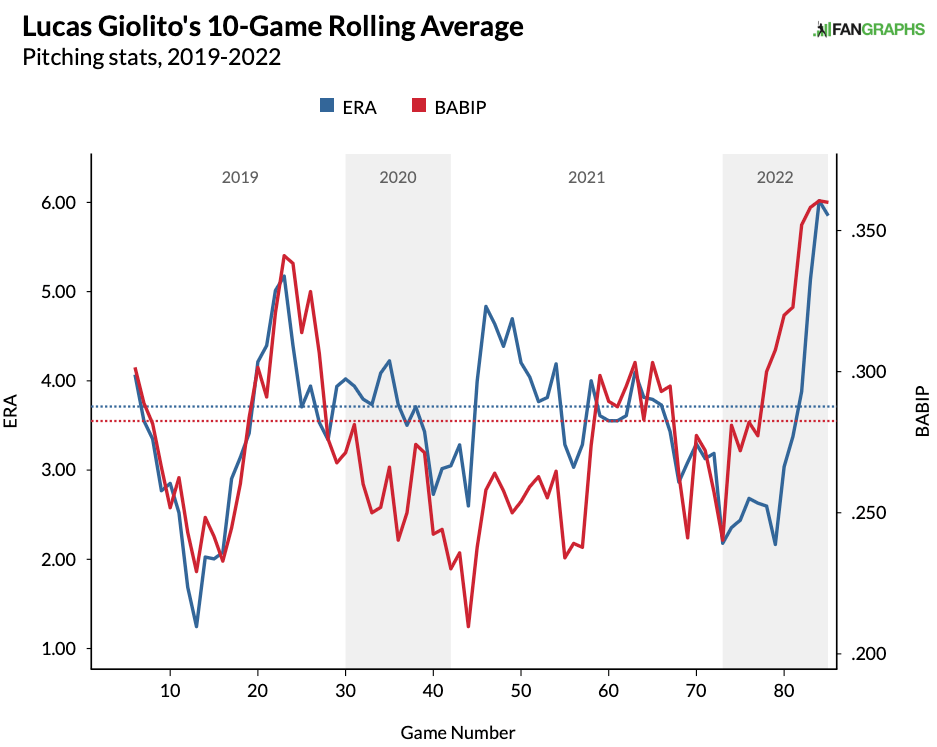 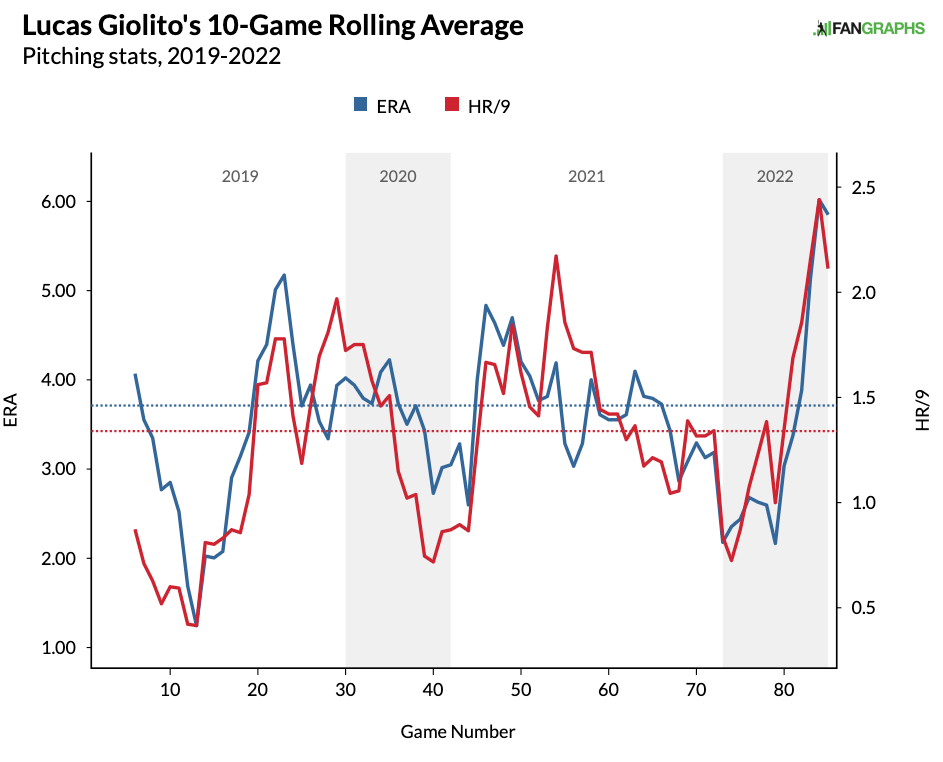 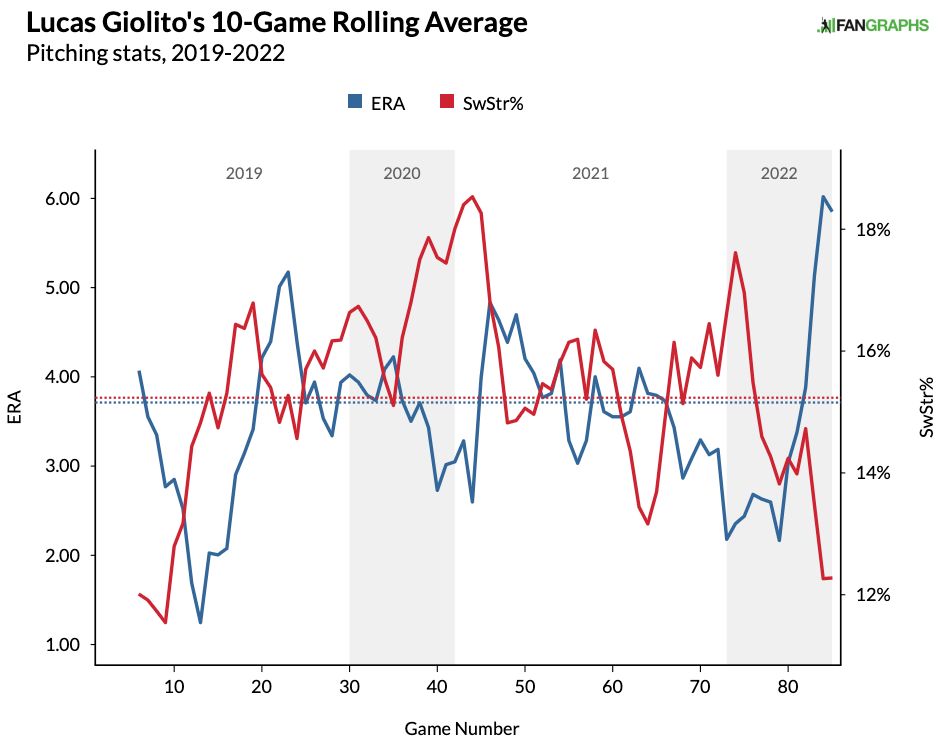 Interestingly, Giolito’s Z-Contact% increased to 84.2%, up nearly six percentage points, though the overall Zone% dropped from 44.2% (2021) to 39.3% (2022). The lower Zone% aligns with the slight increase in walk rate, indicating Giolito’s struggles with control and command. So far, the underlying metrics hint at buying, not selling, with 2022 as the outlier. 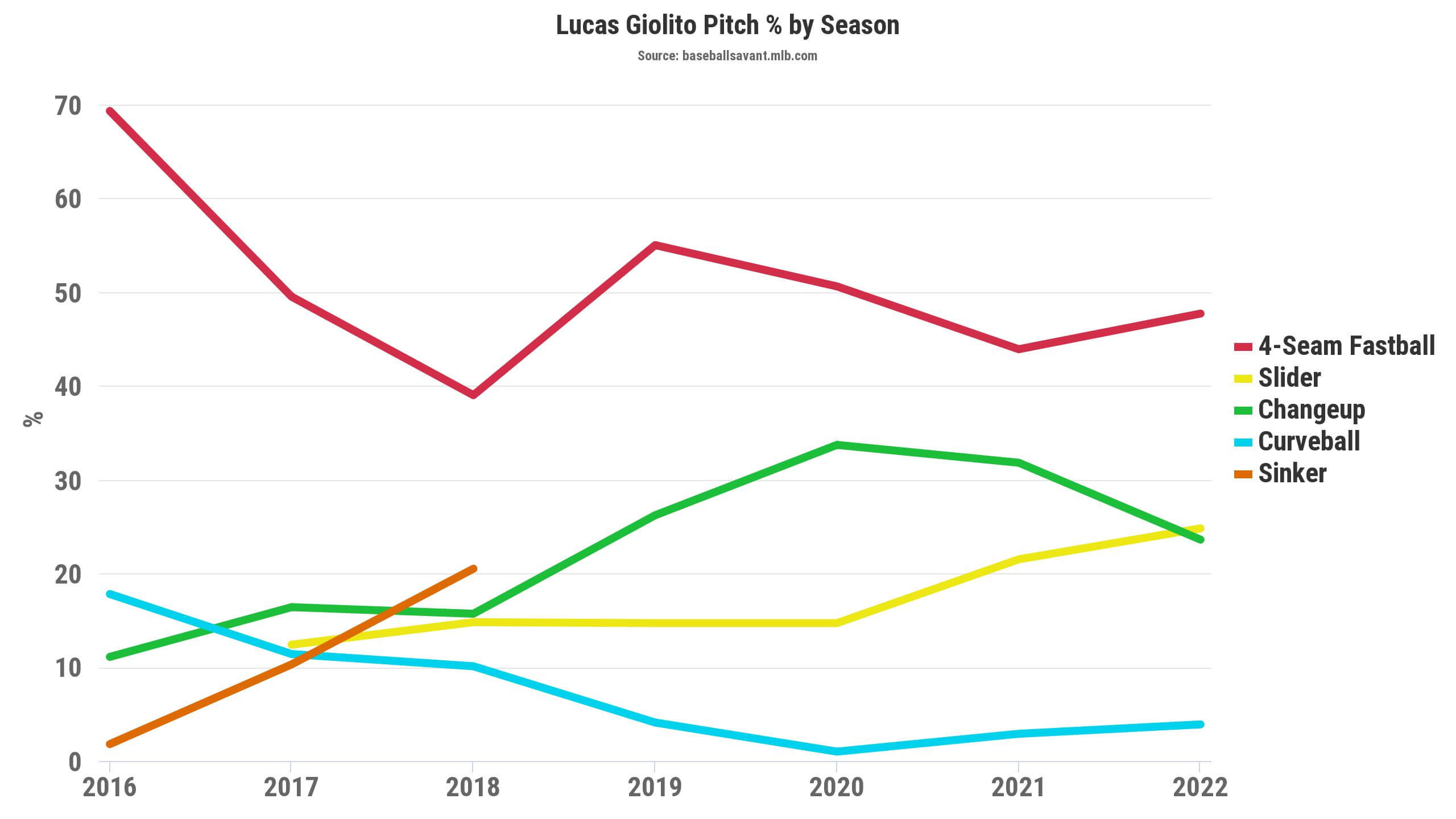 However, let’s see what the underlying skills indicate regarding buying or selling Giolito. Interestingly, Giolito continues to have four offerings with a double-digit SwStr%. His slider remains the only pitch with a drop in SwStr%, around four percentage points from 2021. However, before Monday’s start against the Angels, the changeup had a 16.7% SwStr%. 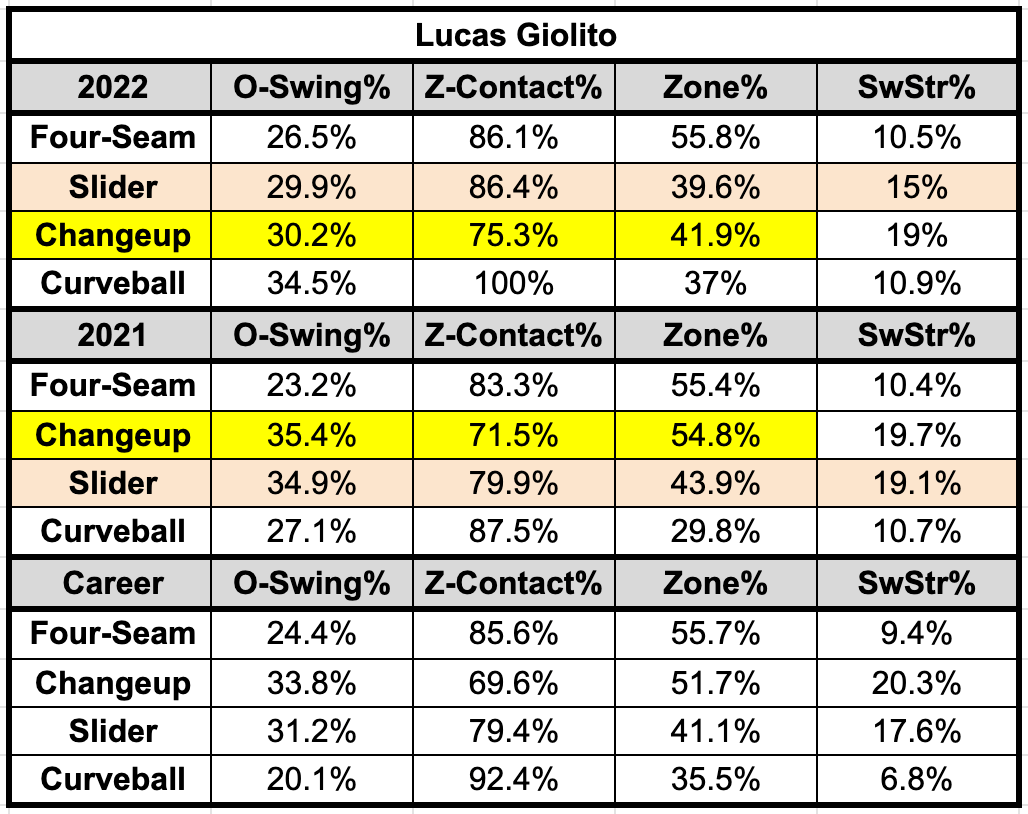 Outside of the SwStr% on the slider decreasing, the Zone% dropped over ten percentage points on the changeup, likely indicating command issues. Giolito’s slider and curveball increased in vertical movement, but the changeup hasn’t changed via the movement profiles. 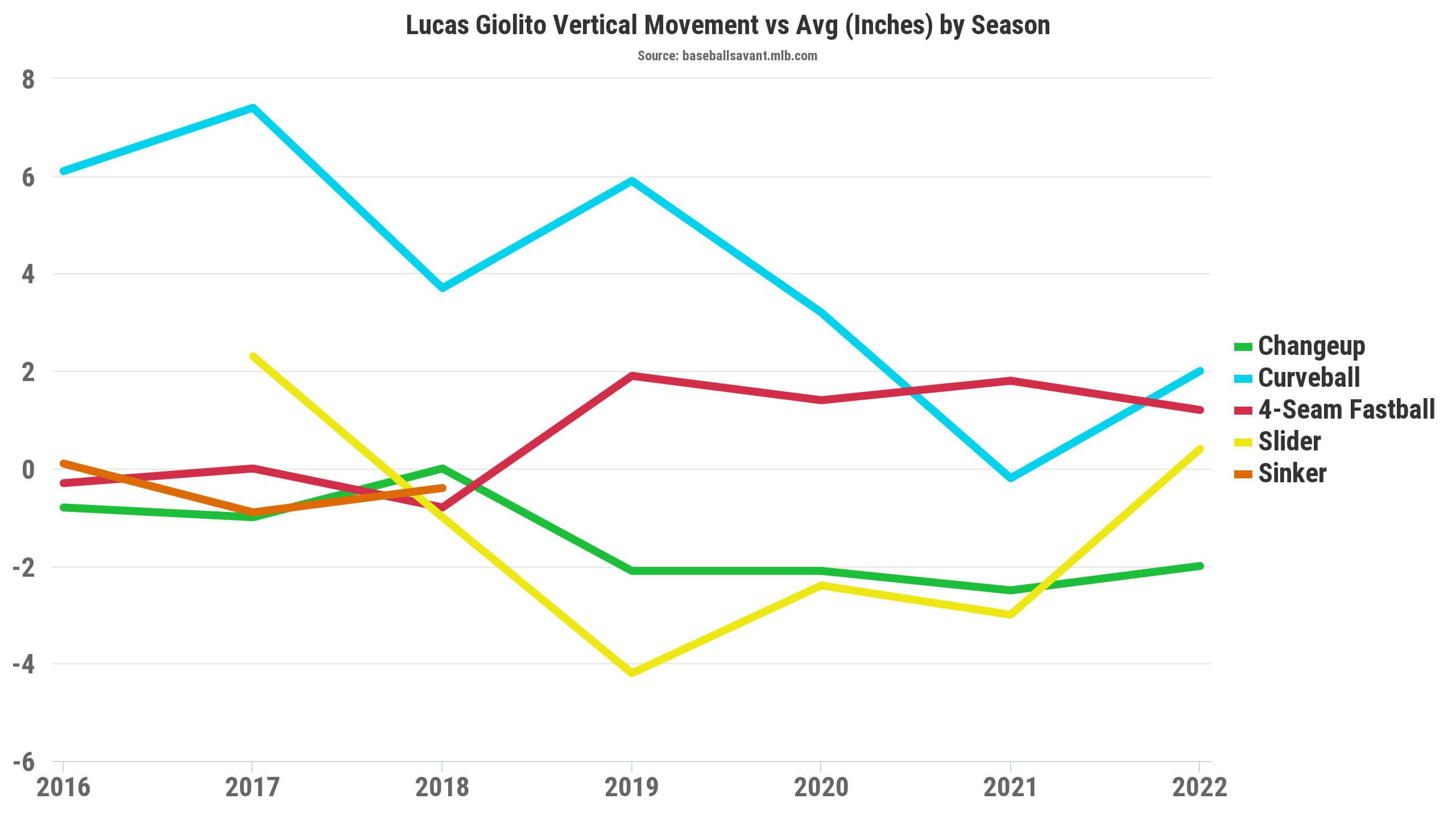 Unfortunately, it hasn’t translated into more whiffs on the slider and curveball. Since the changeup movement hasn’t changed much, what’s going on with one of the best pitches? It looks like the changeup gets crushed by right-handed hitters in 2022 with a BA, SLG, and wOBA nearly double of 2021 across the board.

Although all pitches haven’t fared well, we’ll focus on the changeup since the Zone% significantly dropped.

Interestingly, Giolito’s changeup location from 2021 to 2022 dropped in Zone%, yet it seems he has struggled with commanding the pitch. He still throws it in the zone, but the heat map jumps all over the place in 2022. 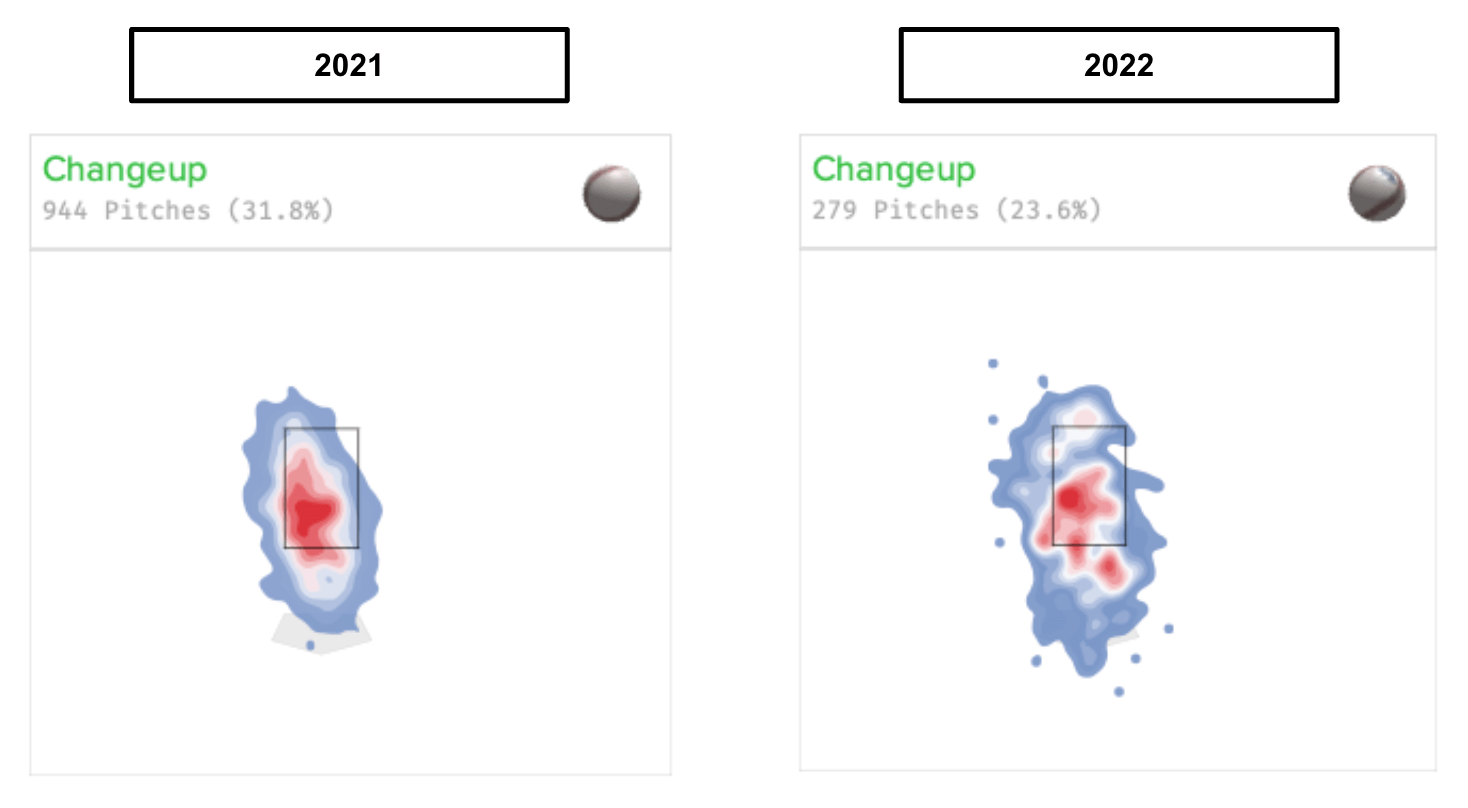 Giolito has recognized the issues with the changeup, so we’ll want to monitor how it shakes out.

With so many concerns for Giolito, should we buy, sell, or hold in redraft leagues? It would be easier to buy rather than sell Giolito if it came down to regression via the BABIP and HR/9. However, the underlying skills remain concerning via the SwStr%, Zone%, and pitch data. That said, the slider and changeup continue to generate whiffs at a healthy rate, so it’s reasonable to expect a bounceback second half of the season.

In keeper/dynasty leagues, Giolito especially warrants a buy-low offer, and the same process applies in redraft leagues. Overall, we identified more reasons for concern than optimism, so don’t expect ace-like numbers from Giolito for the rest of 2022 unless a couple of skills improve.

Update: On Monday, Giolito posted a season-best 71% Whiff% on the changeup versus a season-long 37.9% Whiff% on the offspeed pitch before Monday’s start. The movement profile hasn’t changed versus the season averages, so maybe it’s an outlier game.

We must go back to April 24 to May 10 to find Whiff% on the changeup that sniffs the season-best Whiff% against the Angels. Maybe it presents a sell-high opportunity for Giolito if one sours on him, though the underlying metrics still hint at buying low.

Walks remain a concern for Peterson with a 10% BB%, yet a mediocre 22.7% K%. With three of their top pitchers on the injured list in Jacob deGrom, Tylor Megill, and Max Scherzer, Peterson has a regular spot in the rotation. 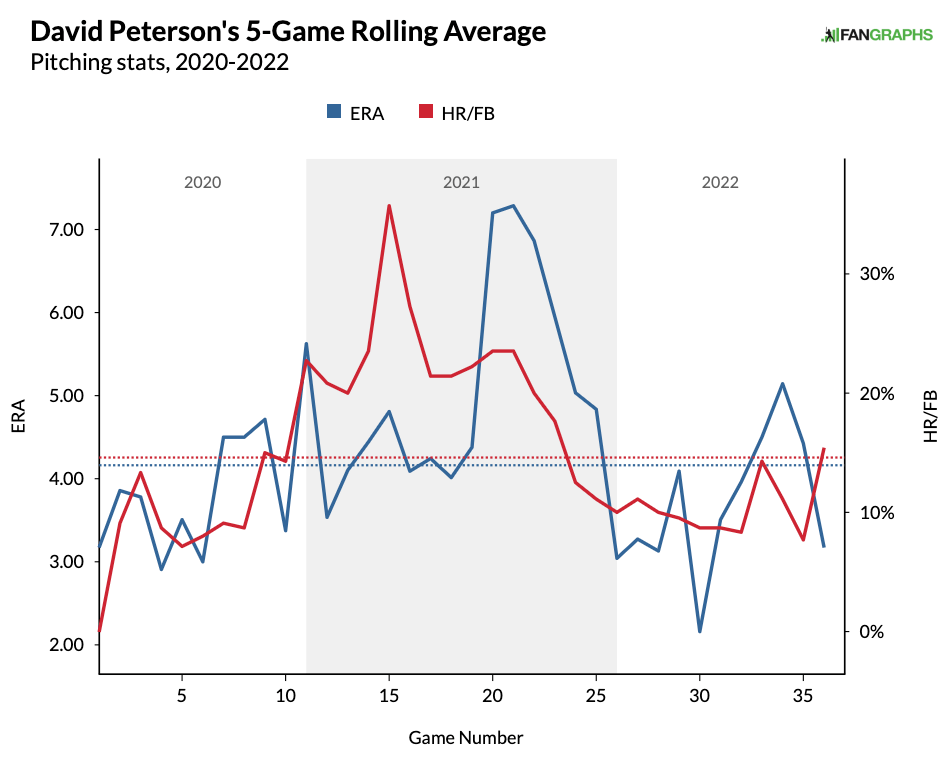 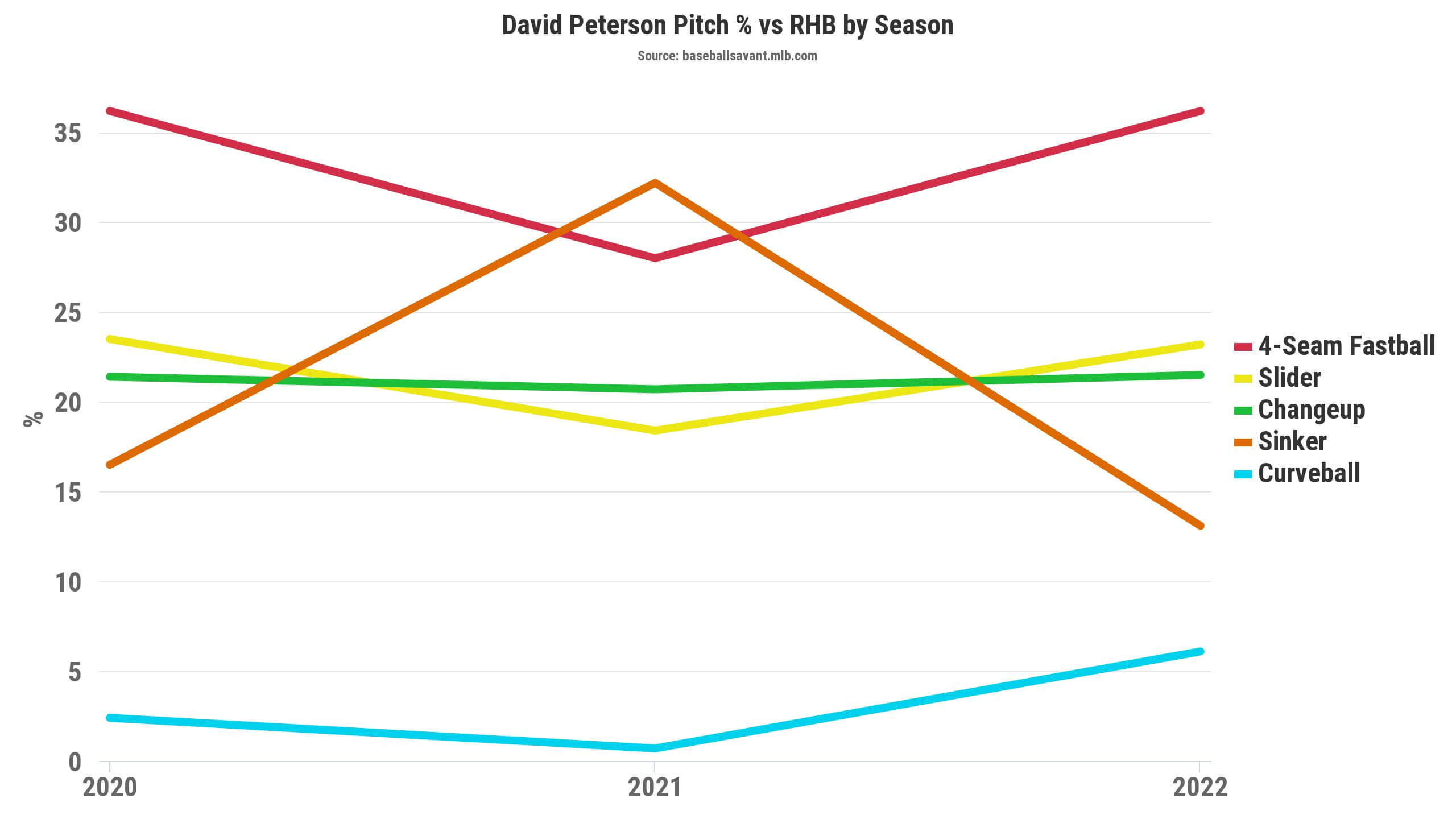 Peterson primarily relies on the four-seamer and slider against both-handed hitters in 2022. Thankfully, Peterson’s best pitch in the slider elicits a career-best 25.6% SwStr% and 41.6% O-Swing% versus a career SwStr% of 21.1%. The batted ball results look near elite, evidenced by the .169 BA, .292 SLG, and .238 wOBA against the slider. 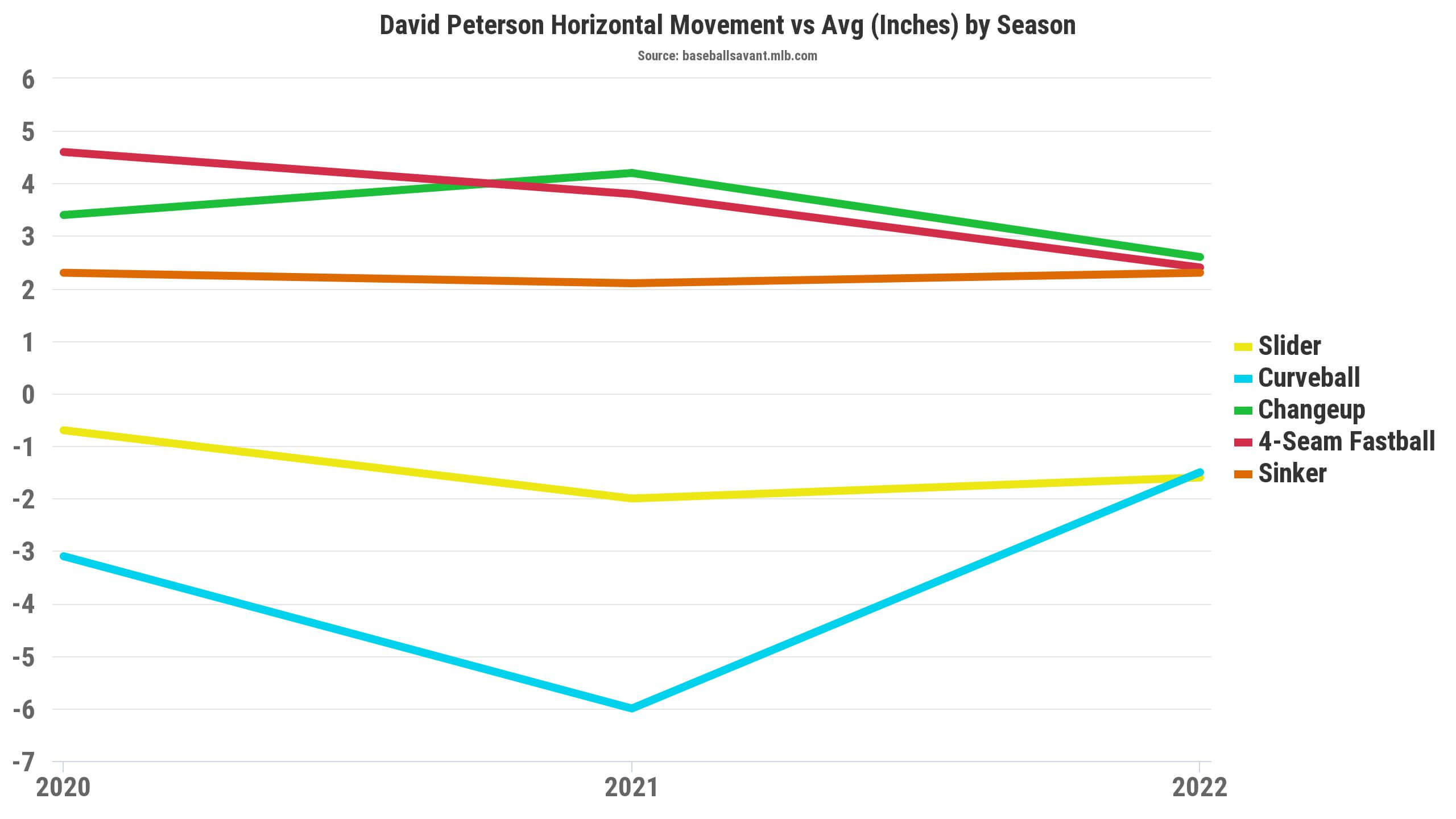 The changeup, four-seamer, and sinker boast above-average horizontal movement in 2022 and past seasons. Peterson’s slider doesn’t pop in the movement profile like the three other pitches. However, it still has 1.2 inches drop versus the average.

David Peterson’s ERA estimators bake in some regression, though it’s still serviceable with a 3.76 FIP, 3.86 xFIP, and 3.93 SIERA. Since Peterson’s BABIP, LOB%, and home run rates don’t seem like outlier levels, it’s probably a matter of whether he can sustain the pitch level data. Unfortunately, Peterson lacks the strikeout upside with the average K% and peak game logs of seven and eight in the past two starts. Peterson serves as a streaming pitcher with one above-average pitch in the slider. Overall, there might be more sustainability with Peterson’s profile than I initially expected.