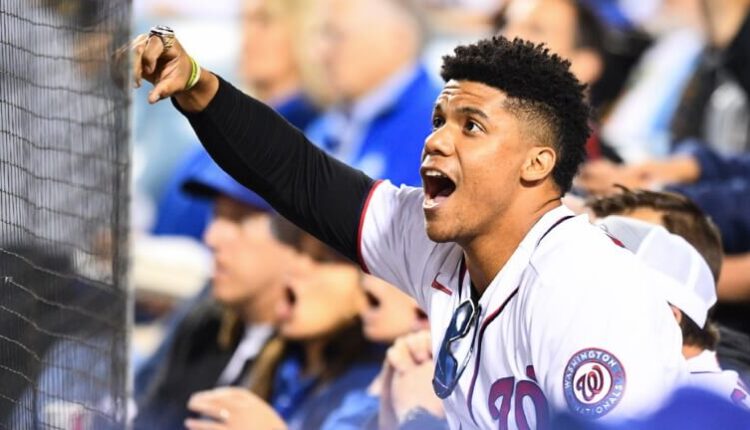 Around this time of year I always find it fascinating and insightful to do a dynasty mock and see how player values have changed and where players would go if you were drafting a dynasty start up.

In order to do this experiment I brought together a crew of sharp dynasty minds, listed in order of randomly generated draft position:

You can see all draft results and follow along here, but let’s dive into some of the picks that stand out. Throughout this piece we’ll be using Chris Clegg’s OBP dynasty rankings that he just updated and you should certainly check out here.

In this mock we see the breakdown of the big 3 of Juan Soto, Ronald Acuña Jr., and Fernando Tatís Jr being auto top 3, as Soto stayed the first pick, but then Drew took Julio Rodriguez, Ryan took Jose Ramirez at 3, Shohei Ohtani (remember – daily league) went to Dave at 4, and then Ian and Eric were able to take Acuña Jr. and Tatís Jr. at 5 and 6 respectively. While I can understand some concern on Tatís with the incessant injuries, Acuña lasting to 5 shocked me since he’s done nothing but impress since he got back on the big league field. It’s worth noting Chris still has those big 3 as his top 3 in the ranking, followed by the other 3 who went in the top 6. So, nothing crazy here at all. It is also notable that Chris ranks Ohtani for a weekly format whereas this is a daily format, which certainly moves him up and, in my opinion, makes a very strong case for him first overall.

So, given a chalk-ish first round, as the draft nears the half-way point who are some players who have been taken at dramatically different draft slot/values then where Chris ranks them? Now – of course ranks and draft value with team builds, contention, and categories (though Chris does assume saves+holds so closer to the reliever valuing of this league than a straight saves league), do not equal ranks, but this still provides a good check.

Now, on the other side, what players were drafted much higher than where Chris ranked them:

@TCasesLoaded took Kenley Jansen 233 with ranking 467, @TBDubbs11 took David Bednar 237 with rank 448. However, as noted, Chris ranks for save+hold and this formt is saves+hold/2, so closers do have more value in the mock format then in the format Chris has in mind with his ranks. Additionally, relievers are one of the places where team build and contention can really force us to throw out rankings if building up a roster in that way. The remaining picks that were above 100 in gap of rank and pick:

So, within this we’ve got a slew of prospects, the roto league destroying breakout Jon Berti, the veteran Miles Mikolas who keeps performing very well, and the ancient and ageless Nelson Cruz. While the Berti pick both surprised me and didn’t, I was also surprised by where Hunter Greene and Luis Arraez went. Greene in particular was surprising given the other arms still on the board when Green went, going ahead of the likes of Walker Buehler, Joe Musgrove, Brandon Woodruff, Shane Bieber, Dylan Cease (whom Jesse Roche rudely sniped me on), Julio Urias, Max Fried, Shane Baz, and Zach Wheeler. That said, I guess Ryan really likes Greene and I’ve certainly seen picks in mocks like this surprise me before that in retrospect end up looking just fine so we’ll see how that one develops! Moreover, for your purpose, if you roster Greene in a league and someone in the league is as high on him as Ryan, it may be worth seeing if you can trade him there.

Take a look at the draft board and Chris’ ranks as you keep looking to make trades and progress in the season so that you can try to accurately gauge value on players as you make those deals!