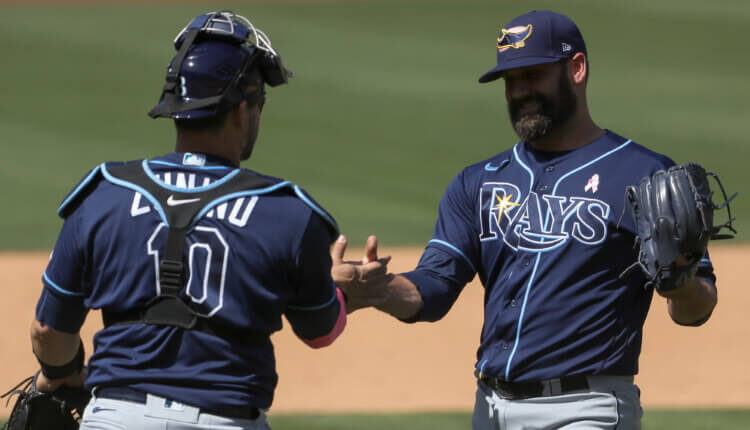 It was another fun week of watching the state of several bullpens twist and turn like something in a  choose your own adventure book.  If there is one thing we know for sure, it’s that many MLB teams are using multiple arms each week to get the desired effect: winning ballgames.  That mixing and matching works well in real life, but doesn’t work so well for all of our fake teams.  What are we to do?  Several high stakes and expert players that I have spoken to are using a variety of strategies this year with some interesting results. We will document that here in the coming days.

Let’s take a look at some of these bullpens and who we may be able to target to get some help this week.

Don’t look now, but another reliever earned a save last week in Tampa Bay: Jason Adam. Manager Kevin Cash has shown a propensity in his career to hit the right button most nights, using Brooks Raley and Andrew Kittredge the majority of the time this year. Tampa is not afraid to deploy any of their valuable arms at any time. I am calling this a timeshare for now between Raley and Kittredge, but that is always subject to change, and change quickly.

In Detroit, despite much kerfuffle around this situation, manager AJ Hinch went back to Gregory Soto earlier this week, who was able to work a clean ninth sans walks and holds on to the job for now.  Will Vest going down to Covid cools the seat a bit under Soto.  Michael Fulmer remains a solid holds candidate. This could be a situation to watch all season.

In Oakland, Dany Jimenez has locked this job down for now.  Lou Trivino has struggled with illness and ineffectiveness and is being used in a setup tole, which is probably where he truly belongs.  However, don’t sleep on AJ Puk should Jimenez falter.  Puk has been terrific this year and looks to have finally found a role in Oakland.  Puk may be especially valuable in leagues where he has both SP and RP designations and can fill your stat sheet up with strikeouts; he has 17 in 17.1 innings.  Do not be surprised if he gets save opportunities at some point this season.

The migraine headache that is Seattle is a full-blown committee. I still lean Paul Sewald here based on the usage patterns.  Andres Munoz has the best arm but is pitching earlier in games.  Diego Castillo and Drew Steckenrider loom large here too.  And let’s not forget, as I point out a couple of times a month, Ken Giles will be back in the mix soon.  Egads.  If you have better options stay out of this one unless you roster all of the Seattle arms!

Joe Barlow is day-to-day with a finger blister injury in Texas.  Doesn’t seem to be a huge issue at this time unless you were forced to use Matt Bush the other night.

Miami is a mess, and they could be reshuffling the deck.  Anthony Bender had the job; many thought the return of Dylan Floro would end that.  But Floro has not looked good since his return, pushing the triumvirate of Cole Sulser, Tanner Scott, and Anthony Bass up in their pecking order.  Good luck sorting this out… If you forced me, I would lean slightly to Sulser at this point.

David Robertson was activated off the Covid IL and pitched Thursday in a non-save situation.  He is the closer in Chicago until further notice.

Cincinnati Tony Santillan earned his first save since Opening Day. Art Warren is still the best option with Lucas Sims on the IL. Sims has not been cleared to throw yet. Grab Warren if he is on your waiver wire.  A deeper sleeper here remains Alexis Diaz, even with his struggles of late.

David Bednar has the job locked down in Pittsburgh right now, and there doesn’t seem to be any timeshare there between him and Chris Stratton.

Arizona Mark Melancon kept a tenuous grip with his eighth save last night but sports a bloated 7.43 ERA, a full three runs higher than the BYB Rockies’ Jack Carter.  Watch it here as they have other options like Ian Kennedy or Joe Mantiply.