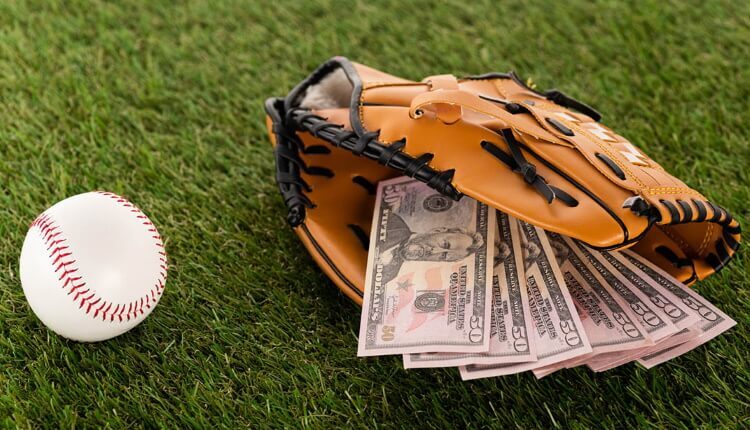 With the lockout in the rear-view, it’s time to get to some serious fantasy baseball. On March 5 I was lucky enough to be one of the participants in the LABR 12-Team Mixed League Auction. Although there were a couple of online glitches that hurt me in the end game, I came away pretty happy with my team. In fact, the Fantasy Alarm Draft Evaluator had me winning the league. I think I’ll need to do a very good job in-season to bear that out, but as far as value, I’ll put my team up against any other in the league. The good news for you is that the 12-team auction values below are the very same values I used during the draft, with the exception of a few small tweaks.

If you want to go more in-depth, please check out my article on Auction Draft Strategy. My strategy for 12-team leagues allows a bit more risk than Deeper NL- or AL-Only leagues, but I still won’t overpay for players. Many people lay back too long in auctions hoping to get great deals later in the draft. That can work, but if you’re in a quality league you’ll end up overpaying when there are fewer quality players available but still plenty of money. Instead I’m not afraid to roster star players at their value. It allows you to form the base of your team and gives you the freedom to free-style a little later on in the draft. Ideally, I’ll get one or two really good starting pitchers, a closer, and three or four near-elite hitters just below price, then I like to sit back a bit and make sure I’m in good financial shape for the end game. NEVER pass up a good value though if it comes along.

Please remember that these values are a guideline and they start changing the minute the first player goes off the board. Succeeding in fantasy baseball auctions is both an art and a science and every auction is different. The best managers are those that can adapt along the way and recognize value when it pops up. The values below are ‘full price.’ That is, they are what I’ve projected each player to earn. Ideally, you would purchase most players at 80% of that value, but as I said above, do not be afraid to purchase star players at or close to their value. Later in the auction is where you’ll make most of your profit.

A little further on I’ll show you my values for each position, but probably the easiest way to see all of the auction values is our printable auction cheat sheet. If you’re going to auction in-person it’s nice to have a paper copy to check off names.

You can also search any individual player in the table below. Just start typing a player’s name in the search box and you’ll see their projected value displayed.

I’d love to grab one of those top three, but I can’t bring myself to pay that much for a catcher. Instead I’d rather pay for a Mitch Garver or Tyler Stephenson type and then wait until the end game to see if any bargains pop up. Elias Diz seems to be showing up on a lot of my rosters as he’s and end-game catcher who puts up decent numbers and shouldn’t kill my batting average.

First base is deep in solid bats but shallow in elite bats. I love Vlad Jr. but his price tag hurts. I’d rather see if Hoskins, Alonso, or Jose Abreu go for a bit of a bargain. I also like Brandon Belt more than most. His numbers per at-bat were elite in 2021. Can he stay healthy? If we knew that he’d be a $30 player. I also like Bobby Dalbec more than most. His strong second half gives me reason to think his average won’t be as bad as many people think.

Do you pay for the speed of an aging Whit Merrifield? Is Ozzie Albies really a $30 player? Second base is another position where I’m more comfortable in that second tier. I like the well-rounded games of Jonathan India and Jorge Polanco. There’s positive news on the Max Muncy injury front. And DJ Lemahieu is going to be a huge bargain if he can even come close to a bounce-back to his 2019-20 form.

Do not wait on third base. It gets shallow really fast. Just go ahead and pay for the first good one that goes at or near his value. In LABR I paid $32 for Rafael Devers and I’m lower on him than most. You do not want to wait too long and be counting on the health of Josh Donaldson or a bounce-back from Matt Chapman. Nolan Arenado and Alex Bregman seem to be decent values at the prices listed. I might bring them up for bid early and see if I can solve my third base position before scarcity creates a bidding war.

Wow, there are plenty of great players at shortstop. I’d be happy to roster any of those top 14. It does get a little iffy after that so you may want to fill your middle infield slot a little early in the auction if you can. Brandon Crawford is getting on in years and isn’t a sexy name, but he added some stolen bases last year and is not a bad solution to that middle infield slot. 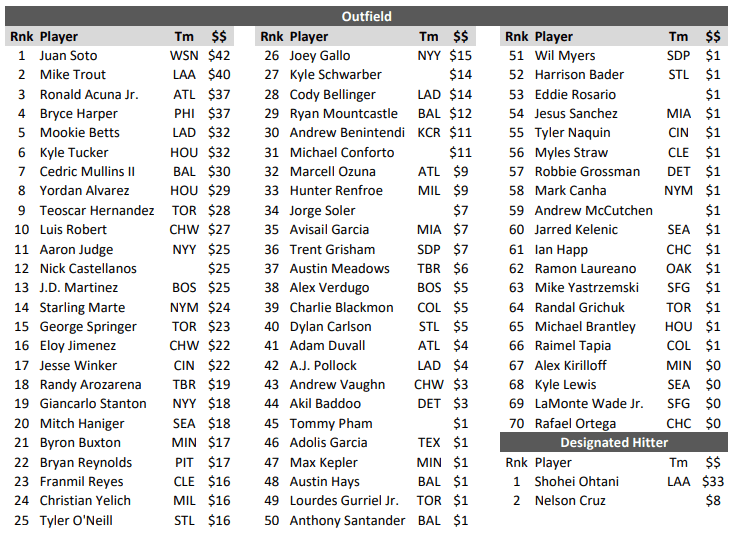 I’m spending some money here and a lot of it needs to involve speed. I like Kyle Tucker and Cedric Mullins near the top end and any outfielders I consider later in the auction better give me 10 to 15 steals as well. I’m thinking players like Trent Grisham, Dylan Carlson, A.J. Pollock, Austin Hays, Wil Myers and Harrison Bader all have the ability to go double-digits in steals and that could make a huge difference at this time of relatively low stolen base totals. Shoehei Ohtani was incredible last year, but his second-half numbers concern me. Will he run that much again? He hit .229 in the second half of 2021. What if that’s closer to who he really is? I just can’t take that kind of risk with what he’ll cost.

I want two of those top 14 and yes, I know I’m higher on Jack Flaherty than most. He’s a Top 10 starter if he makes 30 starts. Then I want to add one more second tier starter like Alek Manoah, Blake Snell, or Ian Anderson. From that point on though I’m perfectly happy to wait until round 15 and on to find the rest of my starting pitchers. There are a ton of starting pitchers I love all the way to the end of a 12-team auction. One starting pitcher that gets no love is Jose Urquidy. Do fantasy managers not realize that WHIP is a category? Urquidy has a 1.01 WHIP in 177 career innings. You can’t fake that. I’m also intrigued by what Jon Gray might do now that he’s out of Colorado, but that’s more of a reserve round kind of intrigue. 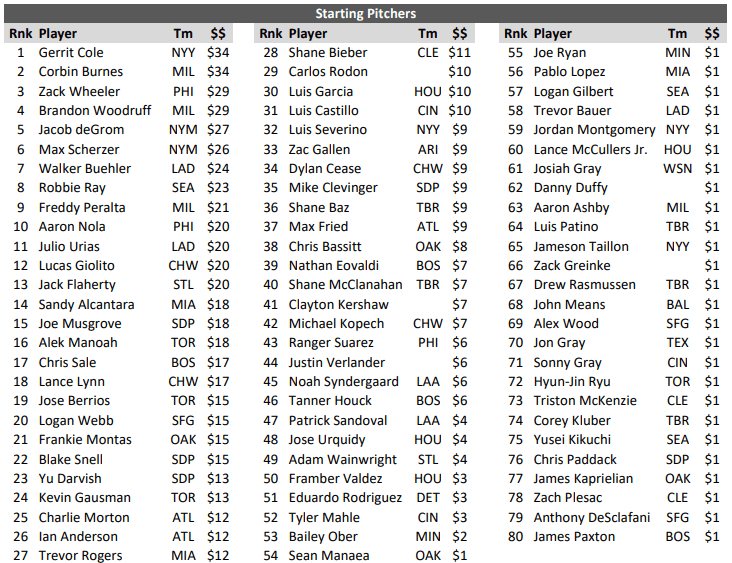 Yes, the closer scene is a mess right now but please don’t fall into that trap of placing too much value on the few ‘reliable’ closers. There will still be the same number of saves to go around, we just don’t know who will be getting them just yet. Just grab the first solid closer who comes at a decent price and then wait around until the end game. You’ll likely be able to grab another one or two closers for under $5. With many bullpens likely to change in the next week or so, these values will undoubtedly be a bit outdated. That doesn’t mean you bump newly anointed closers up to $15. It’s a 12-team league. There will be plenty of saves to grab later.

Please feel free to leave comments below about what an idiot I am for valuing your favorite player too low. I’ve come to expect it. But also remember that these values are a guide and a starting point. As players are signed over the next few weeks these numbers will need tweaking. Take these numbers and auction values and make them something you’re comfortable with.