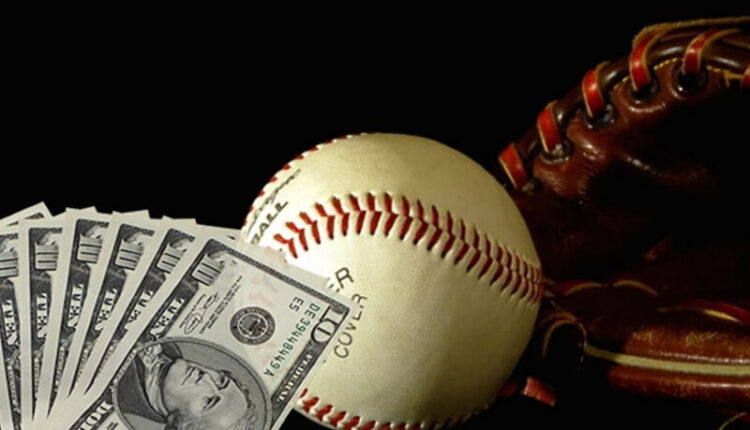 Every year I tweak my annual take on Fantasy Baseball Auction Strategy. It detailed some of the basics of preparing for an auction, allocating your budget, and bidding strategies. Basically, it covers some of the overarching tenets that apply to all auction drafts. I’m also in the final stages of my Mixed League Auction Strategy article. Believe it or not, the differences in the player pool necessitate vastly different approaches.

This article will supplement the previous ones with deep league auction strategy specifically for those of you in NL- and AL-Only leagues.

If you’re here reading this I don’t need to win you over on the auction format. You know the enjoyment and challenge they bring. So let’s get to it and try to figure out the formula for a successful auction.

Stars and Scrubs or Spread the Wealth?

Throughout the years since Rotisserie Baseball started in the early 1980’s there have been two basic approaches used in Fantasy Baseball auctions.

Stars and Scrubs espoused spending up big for a few big stars and then filling your roster out with low-value players hoping to hit on enough of them to support the big money players you rostered.

Spread the Wealth took a more balanced approach, meaning an owner likely passed on the most expensive players, but roster a bunch of solid players at fair prices and was left with very few holes.

I’ve always been more of a spread the wealth guy, especially in NL or AL-Only leagues. In a mixed league, you can spend big on a few players and still get decent players in the end game. It’s also easier to find help on the waiver wire once the season begins. Blow your wad on a handful of players in a deep league and the bulk of your lineup is going to be filled by total bums with minimal or even negative value.

So with the changing landscape of baseball, which strategy works best in 2022 deep leagues? Do you spend big or spread it out? The answer is yes… Both… Okay, I realize I’m speaking out of both sides of my mouth. Here’s the lowdown.

Spread the Wealth on Hitting

I haven’t changed when it comes to offense in deep leagues. If you don’t spread your money around you end up with holes all over the place. Think the 2022 catcher pool, but filling up half your lineup. This likely means I won’t be rostering Fernando Tatis Jr., Ronald Acuna, or any of baseball’s elite players in an auction league. What I will do is roster a bunch of ‘boring’ veterans with guaranteed starting jobs. I want to fill my offense with reliable players I can count on to contribute to my counting stats. Among these veterans, I can also usually count on one or two to have career years and approach the production of some of the stars I bypassed. Think Matt Olson last year or Jose Abreu in 2019. This approach isn’t sexy and no one is calling you a genius at the draft, but in my experience, it leads to strong offenses that perform well across all five hitting categories.

Stars and Scrubs on Pitching

The changing usage when it comes to Major League starting pitchers means we have to change our approach in fantasy. Basically all starting pitchers except the top few are not going as deep into games as they did even a few years ago. This means the elite arms are worth more than ever before, but the gap between the rest of the starting pitchers and middle relievers is being narrowed. This sets up the perfect scenario to use a stars and scrubs approach. In all honesty, I’ve leaned this way in deep leagues for a long time. The current environment means it will be all the more effective.

This approach means I’ll spend relatively big on two aces or near aces. I’ll also make sure I get two closers I feel like I can trust. I probably won’t go top shelf, but a couple of second-tier closers. That may be harder this year than in previous years because the state of MLB bullpens is a mess. Then I’ll fill my staff in with top middle relievers and hopefully starting pitching values I like. I’m looking for my staff at the start of the season to consist of five starting pitchers and four relievers.

The plan is to finish near the top in ERA, WHIP, and Saves, and hopefully stay with the pack in Wins and strikeouts, allowing me to make moves during the season if I need to make up ground. The danger is if one of the low-dollar pitching values I purchased falls flat, doing serious damage to my ERA and WHIP. For that reason, I make sure I have at least one more good reliever on my reserve roster as a safety valve. 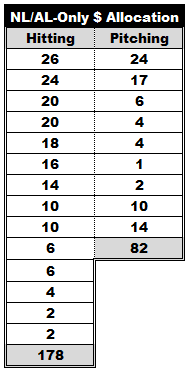 So with these two contrasting approaches for hitting and pitching, how do we allocate our $260? At the right is what I’ve been working on for my NL- and AL-Only auctions. Remember, it’s a guideline. I posted a similar chart in last year’s mixed league auction strategy piece and people were getting hung up on the specific dollar values. Tweak as you wish and if you go over on one number borrow it from another.

I’ve actually borrowed $2 from my usual hitting budget and put it toward pitching. Since I’m not chasing the big money bats, it should still allow me to build a pretty deep and balanced offense. The challenge on the pitching side will be to get two starting pitchers to anchor my staff. I want one bonafide ace and another solid pitcher I trust. To get that ace I may need to borrow money from the $10 reliever slot or my $4 fifth starter. If starting pitchers get thrown out early I will probably have to adapt. I’ll personally be throwing out every elite hitter I can early in the auction.

The key thing to remember is that every auction is different. You have to go in with a plan, but you also need to adjust on the fly when things get sideways. Even more so than in a mixed auction you want to make sure you save money for the end game. It will make the difference between useful regular players and complete holes in your lineup.

Doug Anderson is a 14-year veteran of the Fantasy Sports industry. His work has appeared on RotoExperts.com, Yahoo.com, SI.com, and NFL.com, as well as in the pages of USA Today’s Fantasy Baseball Weekly and various other magazines. Doug has participated in both LABR and Tout Wars, the two preeminent expert fantasy baseball leagues in existence. Doug was formerly the Executive Editor at RotoExperts and is now Managing Editor here at FantraxHQ. You can follow him on Twitter @RotoDaddy.