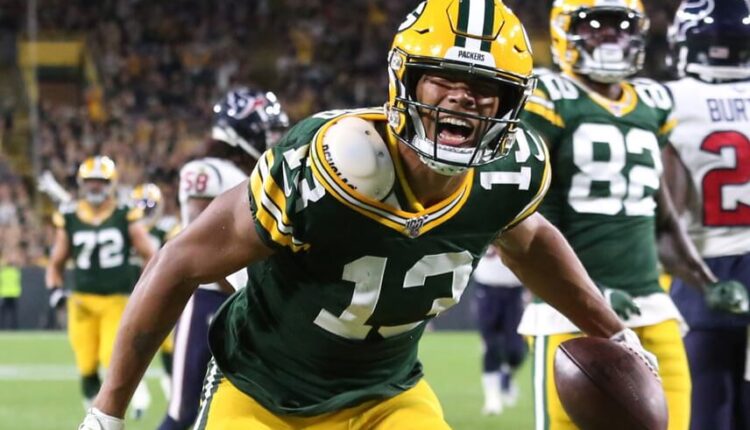 It’s an easy decision to draft a Cooper Kupp or a Stefon Diggs. Those choices tend to get a little harder in the later rounds. Anybody can nail the early picks, but getting value in the back of drafts is really where you set yourself apart from the rest of your league. Finding those WR sleepers is especially important for the RB heavy drafter, as they will miss out on the premier wideouts. This article names four wide receiver sleepers that you should be targeting in your upcoming draft.

An old face in a new place, Jamison Crowder gifted himself a massive QB upgrade when he signed his one-year deal with the Buffalo Bills. Crowder, predominately a slot receiver, will no doubt morph right into the “Cole Beasley role”. In his 3 years in Buffalo, Beasley never saw fewer than 106 targets. Crowder has only seen 100+ targets in two seasons, recording a combined 1,622 yards and 9 TDs. Normally those numbers would not be impressive, but that changes when you consider the fact that those seasons happened with Kirk Cousins and Sam Darnold at QB.

In fact, Crowder has never had a rock-solid QB throwing him the ball. Here’s a gross list of QBs that Crowder has played with at one point or another in his career: Kirk Cousins, Alex Smith, Josh Johnson, Colt McCoy, Mark Sanchez, Josh McCown, Sam Darnold, Luke Falk, Trevor Siemian, Joe Flacco, Mike White, and Zach Wilson. The fact that we even know Jamison Crowder’s name should speak volumes about the type of player he is. Now paired with Pro Bowl quarterback Josh Allen, Crowder instantly becomes one of the top wide receiver sleepers to monitor.

Jamison Crowder managed to get 800 yards with Sam Darnold and almost 500 yards in only 12 games with Zach Wilson.. his yards possibilities with Josh Allen is too high to compute

224 targets have left the building in the form of Davante Adams and Marquez Valdes-Scantling. That leaves only Allen Lazard, a 32-year-old Randall Cobb, Amari Rogers, and rookies Christian Watson and Romeo Doubs as realistic starting options. Entering his fifth season in Green Bay, Lazard already has a leg up on the competition in terms of developing a rapport with Aaron Rodgers, who famously is tough on young WRs. If last season is any indication of what is to come, then there is a ton to be excited about. Lazard finished the season strong, scoring 5 of his 8 TDs in the last 5 games while going for 70+ yards in 3 of them.

Since 2015, Aaron Rodgers’ top WR has surpassed 1,000 receiving yards in all but 2 seasons (Davante Adams 997 yards in 2016 & 2019). Allen Lazard has a real possibility of becoming said top option for Rodgers. Anytime Rodgers is at QB, the offense is bound to be potent, making Lazard one of the wide receiver sleepers well worth taking a stab at in the later rounds of your draft.

Allen Lazard went OFF on that TD drive: 5 catches, 60 yards and a TD. #GoPackGo

Back to back Allens and it just feels so right. If anybody deserves a QB upgrade it’s Allen Robinson. Similar to Crowder, Robinson’s career has been cannibalized by poor QB play. In his eight-year career, AR has only caught balls from the likes of Chad Henne, Blake Bortles, Mitchell Trubisky, Chase Daniel, Nick Foles, Justin Fields, and Andy Dalton. Robinson’s list of scrubs might not be as long, but you could argue that it is just as bad. It seems that LA is quickly becoming a place for NFL stars to get their second chance at success, Robinson being the latest to get his shot.

After scoring only 1 TD last season and not having a single game over 70 rec yards, Robinson is for sure a bounce-back candidate in the high-powered LA offense. Former Rams WR, Robert Woods is now in Tennessee, and unsigned Odell Beckham Jr. is still recovering from the torn ACL he suffered in the Super Bowl. That leaves only Robinson and Van Jefferson as the pass-catching options behind Cooper Kupp. After the season he had last year, defenses will be looking to take Kupp out of the equation, likely by deploying double teams. Kupp being doubled, and Robinson facing off against the #2 cornerback should spell success for him this season.

This probably isn’t Russell Gage’s first time making a WR sleepers list. However, this time around it is completely warranted. It is highly unlikely that WR Chris Godwin will be ready for opening kickoff. Behind Mike Evans, the rest of the WR corps is unproven. Enter Russell Gage. Tom Brady has already been raving about his new pass-catcher and made it clear in a team press conference that Gage needs to swing for the fence. “He has to have a big year. We signed him to a contract and he has to come in and do a great job. He is in a very important role in a pass-heavy offense and has a great opportunity ahead of him.” Straight from the G.O.A.T.’s mouth, Gage is in a favorable position this coming season.

Now in a fruitful environment, Gage has the potential to be special. Towards the end of last season, Gage showed flashes of greatness, recording yardage totals of 130, 91, and 126 in his final 6 games. The unforeseen loss of Calvin Ridley forced Gage to have to match up against the opposition’s top cornerback. It’ll be a different story this year in Tampa as Mike Evans should garner most of that attention.

Tom Brady is putting his faith in Russell Gage pic.twitter.com/4YweJeq6SN

Are you onboard with Reese’s wide receiver sleepers? Let him know in the comments! Also be sure to check out Bradlee Kilgore’s QB Sleepers and our quickly-growing 2022 Fantasy Football Draft Kit.