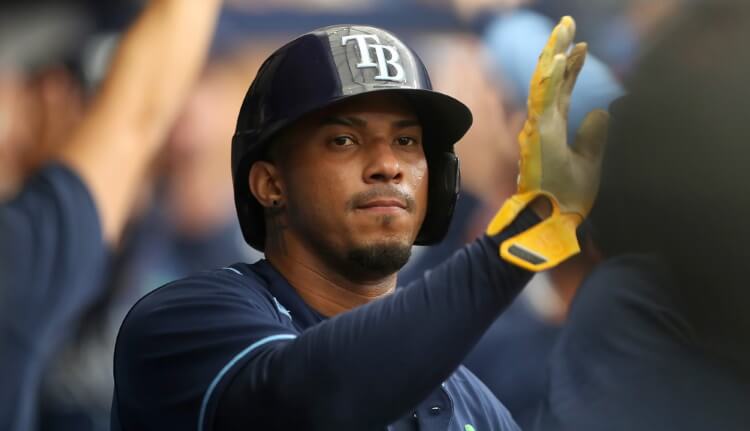 You can see, we have Great American Ball Park, Camden Yards, and a huge matchup at Fenway Park that all host elite hitting environments. There are also plenty of pitching-friendly options over the weekend. More on that in the Ballparks section of this column.

Presently, the weather looks like it could be really dicey for the Tampa Bay Rays and Cincinnati Reds game on Friday. If that game is lost, it would take away the best hitting environment on Friday night so you would need to be prepared to pivot. Be sure to check all forecasts closer to game time.

Tampa Bay Rays (@ CIN) – The Rays get a huge offensive upgrade this weekend by moving from a home park ranked 27th in run scoring to first overall. The Rays always have a nondescript, who-are-these-guys lineup outside of Wander Franco, but that just means we are likely to get some value salaries in the best offensive park possible.

Over the last two weeks, the Rays have the fourth-highest team on-base percentage in the league and have a team 120 wRC+ (20% above league average). With two of the three games coming against struggling Hunter Greene and Nick Lodolo, plus the Reds’ bullpen having an ERA almost a full run worse than any other team, this could be a Ray’s offensive explosion in Cincy.

New York Yankees (@ BOS) – The Yankees finally travel back to Fenway Park to face their bitter rivals, but let’s just say they won’t be facing Pedro Martinez, Roger Clemens, and Cy Young while they are there. Instead, the Yankees will try to tee off of Michael Wacha, Kutter Crawford, and Nick Pivetta, who just allowed seven runs to the Rays at home.

Even before the Yankees travel to Fenway and its top-ten offensive park factor, they are a dangerous road offense. They have the highest slugging percentage and OPS of any team on the road this year and have hit 65 of their 139 homers away from Yankee Stadium. Pay special attention to the left-handed bats this series. I would even watch the cheap ones like Matt Carpenter and Joey Gallo. The Red Sox will roll out three straight righties for the series and their best left-handed reliever is Matt Strahm.

Toronto Blue Jays (@ SEA) – While it might not be quite the level of the Oakland Athletics at home (see note below), the Mariners are not exactly setting the world on fire at home with their offense, considering how much T-Mobile Park depresses run scoring. The Mariners rank just 21st in home slugging percentage and 22nd in home batting average this season. They also strike out 22.4% of the time against right-handers, of which they will face three this weekend.

When Kevin Gausman missed his regular Thursday start, the schedule seems to have shifted to him pitching on Sunday in the series finale. That would mean both Gausman and Alek Manoah are on the docket for the team that is only 25th in runs scored in the last 30 days.

Houston Astros (@ OAK) – It would simply be unfair for the Athletics to have to face Justin Verlander or Cristian Javier in Oakland, but the trio of Framber Valdez, Jose Urquidy, and Jake Odorizzi is only slightly more appealing to the Oakland batters and just means the trio of Astros won’t have over-inflated salary tags this weekend. But even though this may be the Astros’ pitching B-team, they are in no way less appealing in DFS. Even in home games, the Oakland Athletics have the lowest slugging percentage of any major league team (.296) by almost 50 points. They rank last in on base percentage at home, and only have 19 home runs in 1,392 plate appearances in their home park. To make matters worse, they strike out 22% of the time in that stadium. I will be all over Framber Valdez on Saturday as we are likely to see him ground ball Oakland to death in what should be an easy win.

Josh Naylor (1B, CLE) – When you have a series of matchups as enticing as Josh Naylor has this weekend, you can somewhat overlook the fact that he is playing in Kauffman Stadium, which is not an ideal park for power and home runs. But where Naylor can counteract that is in his prodigious production against right-handers this season. On the year, Naylor is slashing .304/.351/.601 against right-handers with 10 of his 11 home runs against that handedness. While he is basically at the Mendoza line against lefties, he is Mike Trout against right-handers.

This weekend, Naylor will line up against Brady Singer, Jonathan Heasley, and Zach Greinke. All three of those pitchers have a K/9 rate under 9.0, and Heasley and Greinke are both under 7.0 for the year. All three are also giving up more than 1.30 HR/9 this season, so this could be a weekend where we see Naylor display his crazy power.

Eric Lauer (SP, MIL) – Nothing really stands out when you look at Lauer’s pitching profile in 2022. He has a decent enough ERA (3.84), he strikes out about a batter per inning, and the walks are a little high at 3.0 per nine innings. But even he has a chance to do his best Randy Johnson performance this weekend against a team that struggles mightily against left-handers like the Pittsburgh Pirates.

The Pirates just simply can not hit left-handers this year. They have the second-highest strikeout rate against them (25.2%), they rank 29th in on base percentage (.289), and are 28th in slugging against lefties (.371). Overall, their wRC+ against southpaws is a lowly 86, or 14% below league average. Lauer has already shut down the Pirates for one run over six innings once this season, and he looks poised to be able to do it again.