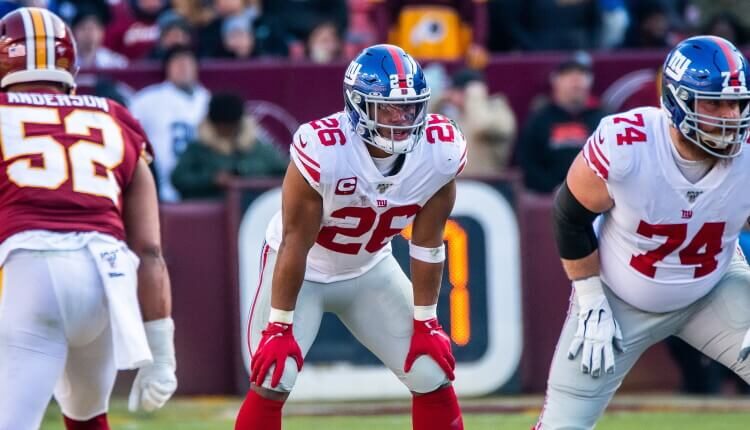 The consensus heading into the 2022 season seems to be that Saquon Barkley is too big of a risk to draft in the first round. According to FantasyPros’ PPR ADP as of this writing, which aggregates ADP data from six different sites, Barkley is currently being drafted 25th overall as the RB14. Most rankers also don’t value him as a first-round selection, as the expert consensus rankings (ECR) currently have Barkley at 17th overall as the RB10. Here’s why Barkley is currently a draft-day steal and belongs in the first round of fantasy football drafts in 2022.

When Barkley first entered the league in 2018, he was touted as a “generational talent”, and that was quickly evident from his play. As a rookie, Barkley amassed over 2,000 yards from scrimmage and scored 15 total touchdowns. That season, he was a true workhorse back, ranking second among all running backs in both carries and receptions. Only Ezekiel Elliott saw more rushing attempts than Barkley, and only Christian McCaffrey had more receptions or receiving yards.

Not only did Barkley see volume as both a runner and receiver, but he was efficient with those touches. He led all running backs in yards created and in evaded tackles in 2018, and Barkley ranked fourth in rushing yards over expectation per attempt (RYOE/Att). The big question is whether Barkley has lost any of his athleticism or explosiveness after having torn his ACL in 2020.

While it’s a difficult undertaking to assess that, there’s plenty of reason for optimism. For one, prior to his ankle sprain in Week 5 of last year, Barkley had strong showings, including a 41-yard breakaway run against Washington in Week 2. More impressive than the speed to finish the run was Barkley’s cut behind the line of scrimmage to avoid the defender, as lateral agility is often lacking after an ACL tear, especially as the Washington game was less than a year removed from his ACL surgery.

More recently, there have been a constant stream of reports on how explosive Barkley has looked in training camp, including this recent play where he flashed his renewed athleticism to create separation from the linebacker in coverage. Now two years removed from his ACL tear and 10 months after his ankle injury in Week 5 of last year, the concern for him is low. Still just 25 years old, Barkley has shown the same agility and acceleration this offseason that made him the no. 2 overall pick of the 2018 NFL Draft coming out of college.

Of course, Barkley’s talent doesn’t matter if he can’t stay healthy and on the field. Is Barkley “injury prone?” Dr. Edwin Porras, among others, has dispelled that myth. Football is a violent sport, and while running backs often bear the most contact and punishment among all positions, there has been no data to suggest that any player’s injury history indicates a propensity to be injured again at a higher rate in the future.

Perhaps there’s some trepidation for players who repeatedly suffer the same type of injury, such as soft tissue ailments like hamstring strains, but this isn’t the case with Barkley. His ACL tear in 2020 was the first time he’s missed significant time in his career, and his ankle injury last season was completely unrelated. There’s no rationale for projecting Barkley to miss time in 2022 any more so than any other NFL player. Even when comparing just running backs, there’s no valid basis for Barkley’s current ADP and ranking to be much lower than some of the running backs being drafted before him.

McCaffrey has played five fewer games than Barkley over the last two seasons, and yet he’s the consensus 1.01 or 1.02 heading into this season. Likewise, Austin Ekeler has had multiple concussions in his career and missed six games in 2020 with a hamstring injury, but apparently, all has been forgiven and forgotten after Ekeler only missed one game last year and scored an incredible (but unsustainable) 20 total touchdowns. The oldest running back with a first-round ADP, Derrick Henry, will be 29 years old before the end of this season and is coming back from a major foot injury in 2021.

And finally, Joe Mixon was labeled “injury prone” after missing 10 games due to a foot injury in 2020. As a result, Mixon’s ADP was in the late second round last September, right around the same range where Barkley’s ADP is currently hovering. Mixon ended up playing 16 games and finishing as the no. 4 running back in PPR. Maybe Barkley will miss more time in 2022, but there’s no actionable data to suggest that he’s at a higher risk for injury than any of McCaffrey, Ekeler, Henry, Mixon, or any other early-round running back.

The battle in the trenches dictates a lot of NFL success, or lack thereof. Since Barkley joined the Giants, the offensive line has been a major issue. In his three healthy seasons (excluding his ACL year in 2020), New York’s offensive line has ranked 29th, 25th, and 31st in adjusted line yards, respectively. It’s no wonder that in those same three years, Barkley has ranked first, 11th, and 10th among running backs in stuffed runs where defenders penetrated and stopped him at or behind the line of scrimmage. Suffice it to say that it’s been an uphill battle for Barkley to produce as a runner.

This offseason, the Giants have completed revamped their offensive line. Andrew Thomas is the only remaining lineman from 2021 and anchors the left side of the line. New York brought in various free agent linemen who had experience with new head coach Brian Daboll in Buffalo, and they spent three draft picks on offensive linemen in this year’s NFL Draft, including selecting right tackle Evan Neal seventh overall.

Beyond the offensive line, New York’s offense also lacked an element of speed to threaten opposing defenses downfield last year. The Giants signed Kenny Golladay to a four-year, $72 million deal last offseason, but he’s a big-bodied contested catch receiver on the outside who ran a 4.50 40-yard dash. And while 2021 first-round rookie Kadarius Toney had 4.43 speed, he started just four games last year due to a combination of inexperience and injuries. As a result, Barkley saw the third-most carries against stacked fronts with eight or more defenders in the box in 2021.

With a healthy Toney and the addition of second-round rookie Wan’Dale Robinson, opposing defenses should respect the deep ball a bit more this season. And while it remains to be seen whether the Giants’ offensive line can be much improved in 2022, even middling offensive line play would be an improvement upon the bottom-barrel performances from recent seasons. Barkley should see fewer stacked boxes this coming season, and he’ll be running behind an offensive line that at worst should be an improvement upon the 31st ranked run-blocking unit from last year.

Joe Judge and Jason Garrett were universally condemned for their failures during their tenure in New York, as the duo served as head coach and offensive coordinator for the last two years. Over these last two seasons, the Giants offense ranked 26th in offensive DVOA in 2020 and ranked dead last in the league in 2021.

Last season, New York’s offense ranked 31st in red-zone trips, and when they got to the red zone, the Giants scored touchdowns only 45 percent of the time, which ranked dead last in the NFL. In contrast, the Bills scored touchdowns on 66 percent of their red-zone trips in 2021, which led the league. Part of that was due to Josh Allen‘s abilities, but Daboll also contributed to that success as the offensive coordinator in Buffalo.

Now head coach in New York, there’s reason to expect Daboll to improve their offensive efficiency. There’s nowhere to go but up after last season, and there are two big changes to expect with the Giants’ new offensive scheme, more pre-snap motion and featuring their best players. Already, there have been reports that the Giants have used Barkley “a lot” as a receiver in training camp, including this play where Barkley was split out wide at the goal line. More motion and more creative usage of Barkley as a receiver both factor into Barkley’s return to elite fantasy potential, especially in PPR formats.

As a rookie in 2018, Barkley’s target volume came largely as a result of an aging Eli Manning nearing the end of his career and constantly checking the ball down to his running back due to waning arm strength. Perhaps Barkley won’t reach quite reach the career-high 121 targets and 91 receptions he saw as a rookie this coming season, but there’s reason to believe that he could come close with Daboll featuring him in the passing game. It’s also reasonable to project Barkley for double-digit touchdowns for the first time since 2018 with Daboll scheming him into space to create yards after the catch and to score in the red zone.

In 2021, Barkley played over 50 percent of the snaps in three games prior to his ankle sprain. In those three games from Weeks 2 to 4, Barkley was the no. 7 running back in PPR scoring, having averaged 20.0 PPR points per game over that span. Barkley accomplished that even playing in a miserably inefficient Giants offense that ranked dead last and running behind the 31st ranked offensive line.

Even a moderate improvement in scoring efficiency going from Judge to Daboll will make Barkley an elite fantasy running back again. Stop mislabeling Saquon Barkley with the “injury prone” tag and fading him due to cowardice. Barkley just needs a bit of luck on his side to stay healthy and be a fantasy league winner in 2022. I have him ranked seventh overall as the no. 4 running back in my top-200 redraft PPR rankings, which you can find here.

Got a hot take on Marquise Brown? Share it in the comments below and then head on over and check out our 2022 Fantasy Football Draft Kit!