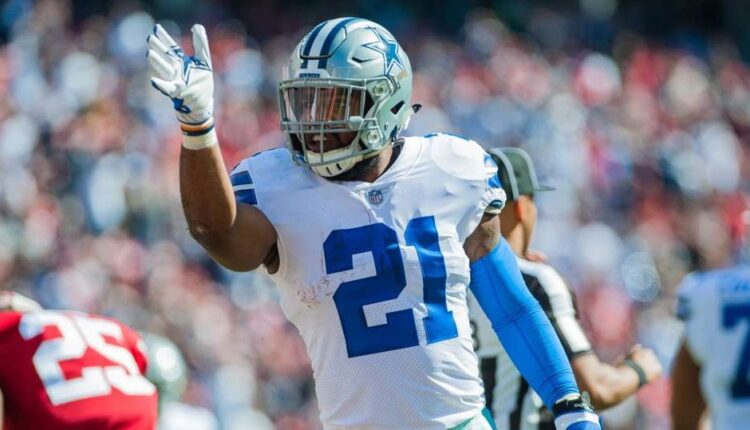 We are all human. Everybody has their ups and downs. Athletes are no exception to the rule. It’s not uncommon for a player to have a down season. But it’s not how you fall, it’s how you get back up. Here we’ll highlight four bounce-back candidates for the 2022 fantasy football season who are looking to prove that their down year was a fluke.

Also featured in my wide receiver sleepers article, AR tops my bounce-back candidates list. It seemed that the only time Allen Robinson showed up on the stat sheet last season was during games where Veteran QB, Andy Dalton was under center. Robinson and Justin Fields just could not get on the same page. Luckily for Robinson, he’s now in Los Angeles, playing for the Rams. Veteran QB Matthew Stafford will no doubt be the best quarterback that Allen Robinson has ever had in his professional career.

Another big reason that Robinson should succeed as a LA Ram is the presence of fellow wide receiver Cooper Kupp. Robinson doesn’t have to be (and won’t be) the number option for his team anymore. Kupp went on an absolute rampage last season and has certainly earned the respects of defensive coordinators across the NFL. These coordinators will likely develop their game plan around stopping him, first and foremost, leaving Allen Robinson to feast on number two cornerbacks.

Even though Zeke barely managed to rush for over 1,000 yards last season (1,002), he still makes my bounce-back candidates list. When you compare this to his 2018 and 2019 seasons of 1,434 and 1,357 rushing yards respectively, you see that Elliott has not been reaching his full potential. Factor in the fact that there was an extra game last season and it really starts to stick out as concerning.

There are a couple of reasons I suspect that Zeke will return to form in 2022. First, the Cowboys are undoubtedly going to have to fuel their offense through the run game. The loss of Amari Cooper and Cedrick Wilson has left CeeDee Lamb as the only proven receiver standing. Second, I believe that in the final year of his contract, the Cowboys will use Tony Pollard much more. At first glance, this may seem like a bad thing for Zeke, but trust me, it’s not. More Tony Pollard means a fresher Zeke Elliott. Last season Zeke lacked explosiveness, which led to a very average 4.2 yards per carry. If Tony Pollard can do a bit more of the leg work, that leaves a fresh Zeke Elliott to punch the ball in when his team gets into the red zone.

“I just want to show the Giants that the guy they drafted is still here.” With a new coaching staff and an upgraded offensive line, Mr. Barkley should be able to do just that. Saquon had only one game over 100 yards rushing last season. His next highest total was a measly 64 yards. Factor in the fact that he only scored two touchdowns on the ground and you can see why he makes this list of bounce-back candidates. All in all, the New York Giants have not drafted his replacement, so it is plain to see that the internal belief is still there.

In recent years Barkley has had to try to carry his squad. Thanks to some down years and high draft picks, the Giants have been able to surround Saquon with real talent. Especially in the WR room. Deep Threats Kenny Golladay and Kadarius Toney should stretch the field, while the rookie gadget player, Wan’Dale Robinson keeps everybody else on their toes. All of this extra room to operate paired with first-round pick Evan Neal clearing the way spells success for Barkley in 2022.

The last of my bounce-back candidates is Courtland Sutton. Sutton is a hard man to evaluate because he has only enjoyed one breakout season (2019: 1,112 yards & 6 TDs), he only played in one game in 2020, and he had to “catch” balls from a combination of Teddy Two Gloves and Drew Lock last season. Most of that success in 2019 came with Joe Flacco under center. I don’t think I’m going out on a limb here when I say that Russell Wilson is a massive upgrade from Flacco, Bridgewater, and Lock.

Russell Wilson left a good receiver room in Seattle to come to a pretty solid one in Denver. If the comparisons haven’t already been made, I’m sure they will be soon. Analysts and commentators alike can’t wait to compare Jerry Jeudy to Tyler Lockett and Courtland Sutton to D.K. Metcalf. If this comparison holds true, then Sutton is certainly in for a bounce-back season. Wilson is known for his deep ball accuracy, which perfectly matches Sutton’s skillset.

Got a few bounce-back players of your own? Drop some names in the comments below and then head on over and check out our 2022 Fantasy Football Draft Kit!