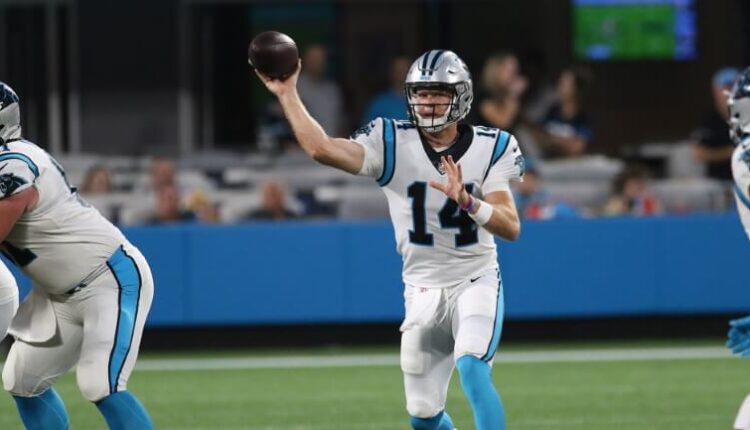 For Week 3, I recommended Daniel Jones against the Falcons, Justin Fields against the Browns, and Teddy Bridgewater against the Jets. Jones salvaged his day with some rushing yards but disappointed against a weak Atlanta secondary after losing both Sterling Shepard and Darius Slayton to hamstring injuries. Fields was an absolute disaster and can’t be trusted until we see a coherent game plan from Matt Nagy, and while the Broncos predictably dominated the Jets, the running backs stole the touchdowns along with four field goals from Brandon McManus, leaving little meat on the bone for Bridgewater.

Overall, Week 3 was not pretty week for the quarterback streamers, though Sam Darnold and Derek Carr performed well if you went with one of the honorable mentions. If you drafted Patrick Mahomes or Kyler Murray early or managed to snag Tom Brady or Jalen Hurts later on in your drafts, this article probably isn’t for you. But if you’re desperately trying to find a starting quarterback for Week 4, here are some serviceable quarterback streamers with good matchups who can help your fantasy team win this week.

I projected a top-12 fantasy quarterback finish for Taylor Heinicke in Week 2 facing the Giants, and I’m going back to that well in Week 4 against the hapless Falcons. In his two starts since taking over for Ryan Fitzpatrick, Heinicke has now logged consecutive weekly finishes of 20-plus fantasy points. Yes, more than half of his fantasy production against the Bills came on a 73-yard touchdown that was pretty much all yards after the catch from Antonio Gibson on a screen pass, but Heinicke will face a much less-menacing Atlanta secondary this coming week that ranks 26th in pass defense DVOA.

The Falcons have also struggled in stopping opposing quarterbacks from running on them. Jalen Hurts logged 62 rushing yards against them in Week 1, and Daniel Jones just ran for 39 yards against Atlanta this past week. After running for 21 yards and a rushing score against a tough Buffalo defense in Week 3, Heinicke could find similar success against the Falcons in this game. Considering Atlanta’s struggling secondary and inability to contain rushing quarterbacks, Heinicke has the highest fantasy floor and ceiling among this week’s quarterback streamers.

Even after losing Christian McCaffrey to a hamstring strain in the first half, Sam Darnold logged a 25-point fantasy outing against the Texans last Thursday night. The absence of McCaffrey downgrades Carolina’s offense as a whole, but Darnold still has enough surrounding weapons to keep him among the top quarterback streamers for this week against a Dallas secondary that has allowed over 300 passing yards in each of their first three games.

Vegas projects 50.5 total points scored in this game, and this matchup could turn into a shootout with Jaycee Horn out. Even after trading for C.J. Henderson earlier in the week, the Panthers could struggle to contain the Cowboys’ red-hot offense. Carolina has ranked ninth-lowest in pass rate thus far on the year, but we’ve yet to see them fall behind in a game this season. If the Panthers trail in the second half of this matchup, we could see a season-high in pass attempts from Darnold in a high-scoring affair. Darnold has also run in three scores through three games and could call his own number again near the goal line this week with McCaffrey out.

Derek Carr has a tough matchup against the Chargers on Monday night, as Los Angeles has allowed just four passing touchdowns to opposing quarterbacks through three weeks. Still, Carr has been playing well to start the season, having thrown for 300 yards and multiple touchdowns in each of his first three games. He’s also been aggressive in attacking downfield, as his 9.1 intended air yards per pass attempt (IAY) currently ranks seventh-highest among quarterbacks.

The primary concern with Carr this week is that the Raiders’ game plan could focus on featuring a heavy dose of Josh Jacobs (or Peyton Barber again if Jacobs isn’t recovered from his toe and ankle injuries) with the Chargers’ defense having allowed the most rushing yards in the league thus far. Derwin James also matches up well against Carr’s favorite target, Darren Waller, and could limit the tight end’s contributions this week. Los Angeles could also get Chris Harris Jr. back for this game after he’s missed the last two weeks with a shoulder injury, making an already stout secondary even better and Carr even less attractive among the quarterback streamers. Heinicke and Darnold are safer plays this week despite Carr’s hot start to the season.

In deeper leagues, if none of the above-recommended quarterback streamers are available, Zach Wilson could be a serviceable option. Bill Belichick had the rookie’s number in Week 2, and the Jets got demolished by the Broncos in Week 3, but Wilson looked competent in the season opener against Carolina, and Tennessee will be the weakest defense he’ll have faced thus far in his career. And if you’re desperate, Matt Ryan is going up against a pass-funnel Washington defense with a beatable secondary. Ryan has upside if he can get the ball out quickly enough before the pass rush gets to him.