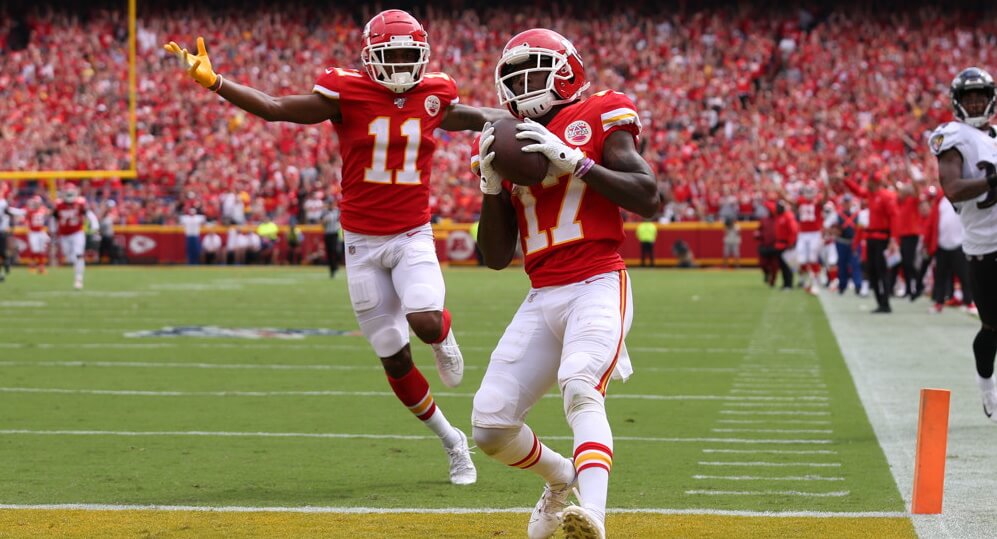 Anytime a player suffers a devastating season-ending injury, we feel for that player and never like seeing that. Hopefully, Dak Prescott has a smooth recovery from his injury. The 2020 fantasy football Week 6 waiver wire involves a few exciting young receivers along with backup running backs to pick up and stash. Although this week may not seem as fruitful as previous weeks, continue to grind and work the waiver wire throughout the season. With that, let’s look at the 2020 fantasy football Week 6 waiver wire.

Not sure where this saying comes from, but the cat is out of the bag on Justin Herbert. In the first half on Monday Night Football, Herbert threw three passing touchdowns and no interceptions. Then Herbert also linked up with Mike Williams for a 64-yard touchdown. In three games prior, Herbert averaged over 300 passing yards and 20.0 fantasy points per game (No. 10). Pick up Herbert and start him with confidence as a high upside streamer until proven otherwise.

Holy Derek Carr as the Raiders handed the Chiefs their first loss of the season. Carr went 22-for-31 with 347 passing yards for three touchdowns and one interception. Henry Ruggs III and Nelson Agholor helped him with a 72-yard touchdown for Ruggs and a 59-yard touchdown for Agholor. Carr continued to play well and came into this game ranking 11th with 1,093 passing yards, 2nd with a 79.1% True Completion Percentage, and 7th with eight passing touchdowns. With bye weeks starting, pick up Carr as a streaming quarterback in the 2020 fantasy football Week 6 waiver wire. However, the Raiders have their bye week in Week 6, so Carr is someone to pick up and stash for now.

Derek Carr has completed 3 of 4 deep passes for 177 yards with 2 TD in the first half, including this 72-yard TD pass to Henry Ruggs.

Carr has more deep passing yards in the first half today than he has had in a game over the last five seasons.#LVvsKC | #RaiderNation pic.twitter.com/iuT8t2gKBC

Quarterbacks to Add/Monitor in Superflex or 2-QB Leagues

One quarterback to monitor in Superflex or 2-QB leagues includes Jalen Hurts as Carson Wentz winced throughout the game, and the Steelers defenders sacked him five times. Other quarterbacks to pick up include Andy Dalton with a season-ending ankle injury to Dak Prescott. The 49ers backups in C.J. Beathard and Nick Mullens with Beathard having the backup spot. Also, potentially Case Keenum on the Browns with Baker Mayfield suffering a rib injury, although recent reports state that X-rays were negative.

Although Josh Jacobs is the workhorse running back in Las Vegas, Devontae Booker showed explosive plays on Sunday with seven carries for 62 rushing yards. With all the injuries, especially to running backs, Booker looks like the Raiders backup running back to roster on fantasy teams. Booker ranks as one of the top running backs in the 2020 fantasy football Week 6 waiver wire to pick up and stash.

On Saturday night, I tweeted out a few notable advanced metrics and where J.D. McKissic ranked. Antonio Gibson and McKissic continue to share about half the snaps, and McKissic had a semi-productive day in PPR leagues. McKissic caught six of eight targets for 46 receiving yards. Again not a league winner by any means, but worth a deep league pickup in the 2020 fantasy football Week 6 waiver wire.

Rookie wide receiver Chase Claypool scored four touchdowns with three through the air and one on the ground. He caught seven of 11 targets for 110 receiving yards. Diontae Johnson suffered a back injury and left the game, and thus Claypool received more playing time and scored touchdowns. Claypool showed his athleticism and run after the catch playmaking ability. As an explosive athlete, Claypool ranks as the top player in the 2020 fantasy football Week 6 waiver wire.

Just a quick mention here about the rookie Laviska Shenault Jr. in case he’s hanging around on the waiver wire. He led the Jaguars in receiving and caught 7-for-8 targets and 79 receiving yards. Although D.J. Chark likely leads the team in targets by season’s end, Shenault continues to earn more targets heading his way.

With Sammy Watkins expected to miss a couple of weeks due to a hamstring injury, Mecole Hardman could see increased snaps. Through four weeks, Hardman logged a 45.8% snap share (No. 117). However, in Week 3 and 4, Hardman received ten targets, eight receptions, 108 receiving yards, and two touchdowns. In Week 5, Hardman caught two of three targets for 50 yards. With Hardman’s speed and big-play ability, he’s worth a pick up with that boom potential to run past defenders on any given play.

With the original Eagles wide receivers all banged up and ruled out due to injury, unexpected contributors stepped up per usual. In Week 5, Travis Fulgham led the Eagles in all receiving categories and caught ten of 13 targets for 152 receiving yards and one touchdown. Before this game, he played in Week 4 and caught two of three targets for 57 receiving yards and one touchdown. Anytime a receiver earns 13 targets or a 36% target share, it’s worth noting in the 2020 fantasy football Week 6 waiver wire. If anything, we love the journey for Fulgham.

On Thursday night, Tyler Johnson led the Buccaneers in receiving yards. He caught four of six targets for 61 receiving yards. After injuries to Chris Godwin and O.J. Howard, Scotty Miller and the tight ends expected to soak up more targets. However, Tyler Johnson showed us why the Buccaneers drafted him with his elite college prospect profile. Johnson had a 57.2% College Dominator (98th percentile), 36.1% College Target Share (96th percentile), and a 19.0 Breakout Age (90th percentile). In deeper leagues, monitor and pick up Tyler Johnson in the 2020 fantasy football Week 6 waiver wire. Fellow Fantrax writer Meng Song wrote up an article on Johnson titled Dynasty Football Sleeper – The Next Cooper Kupp? – check it out here.

With O.J. Howard lost for the season, Cameron Brate and Rob Gronkowski soaked up tight end targets. Brate finished the game with five catches for 44 receiving yards on six targets. Gronkowski and Brate tied with six targets each, and both fall into the back end streaming tight end category in the 2020 fantasy football Week 6 waiver wire.

Gerald Everett notably increased the snaps played over the past three games. Before this game, Everett only received five total targets in three games. On Sunday, Everett caught all four of his targets for 90 receiving yards. His teammate Tyler Higbee only received two targets for two catches and 12 receiving yards. Monitor the snaps played by both tight ends, but it looks like tight end roulette for the Rams with Everett having the upper hand at the moment.

Barely any players on the Colts offense performed well on Sunday, but Trey Burton received six targets for five catches and 33 receiving yards in his second game back. Honestly, Burton put up a donut for most of the game, so take this with a grain of salt. However, Philip Rivers and the Colts want to involve their tight ends, hence the production from Mo Alie-Cox in previous weeks. Although not an exciting tight end option, Burton is worth considering in deeper leagues.