Running Back Sleepers for 2019 Fantasy Football 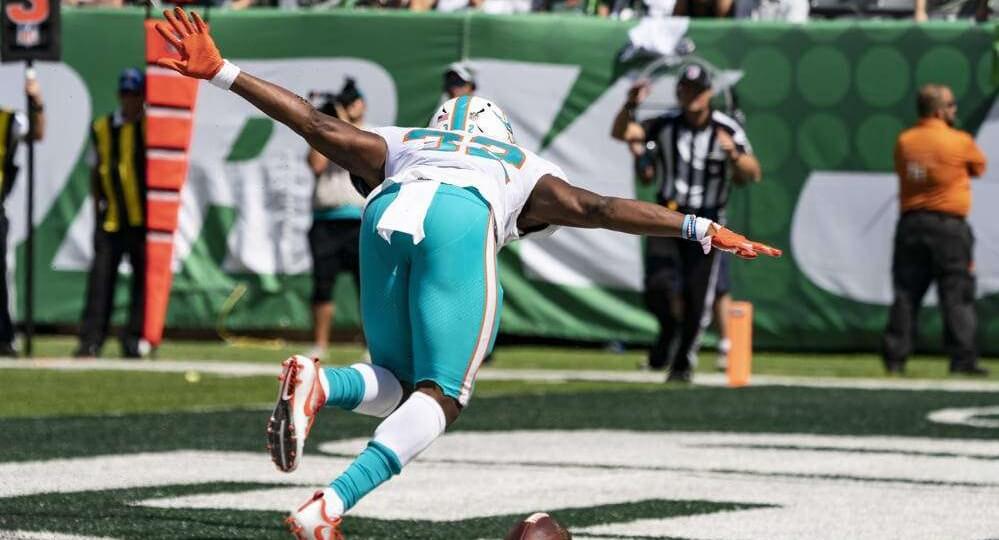 Gary Davenport takes a look at the players he considers the top running back sleepers for 2019.

Finding a “sleeper” at the running back position is a lot like finding a duffel bag filled with cash on the street. It’s possible in theory, but highly unlikely—and if you’re fortunate enough to do so you figure either there’s a catch or some hidden cameras in the bushes.

The reality is that in a standard fantasy draft upwards of 60 running backs will be selected—if not more. Any back with half a pulse will be drafted. Running back is the most important position in fantasy football, and hitting on one of your running back sleepers is like a delicious cold beverage on a hot summer’s day.

There’s no such thing as too many.

However, all “sleeper” really is a catchier way of saying undervalued—players who are coming off draft boards later than they should. Players who are quite capable of outperforming their draft slot by a sizable margin. Players the rest of the fantasy community is, well, sleeping on a bit.

5 Running Back Sleepers for 2019 Fantasy Football

Each of the running backs listed here—all of whom have an ADP at Fantrax outside of weekly starter territory—have that potential.

And getting that kind of value at running back is how leagues are won.

So, while most of my running back sleepers will be available fairly late on draft day, I’m going to kick this off with a guy coming off the board in Round 5.

New Dolphins head coach Brian Flores has been trying to shut Drake down for years now as a defensive coach with the New England Patriots. As Mark Inabinett reported for AL.com, if he has any secrets in that regard, he’s not about to share them now.

“He’s athletic, he’s explosive, he’s fast, he’s a good route runner, he does a lot of good things,” Flores said. “How you defend him — we’ll let the opponent figure that out. It’s hard to defend him. As we sit here today, you don’t know where he’s going to align. I think (offensive coordinator) Chad (O’Shea) has done a good job — Chad, Jeremy, Jim, Eric — they all do a really good job coming up with ways to put our players in the best positions to do what they do well and put the defense in some tough positions.”

That Drake’s coming off draft boards in RB3 territory is one of the great mysteries of the fantasy universe in 2019. We’re talking about a player who was a top-15 PPR running back a year ago—in a season where Adam Gase forgot Drake was on the team for long stretches. Yes, the Dolphins are going to be bad. And Drake’s not a 25-carry-a-game guy, but he’s a good bet to lead the Dolphins in running back touches, and he’ll be on the field in garbage time thanks to his status as the team’s passing-down back.

OK, now that I got you a potential PPR RB1 on the cheap, let’s start kicking over some rocks.

As Kevin Patra reported for NFL.com, Adrian Peterson has his sights set on a reasonable goal in 2019. After topping 1,000 yards for the Redskins in 2018, Peterson just wants to double it this year.

“If God’s willing, I can duplicate that and do it even better,” Peterson said. “I got my mark set at 2,000 (yards), I’ve always had it at that mark since I stepped into the league. So that’s where it’s at. But most importantly, I just want to contribute to the team and help this team win a championship.”

To be clear, if Peterson tops two grand in 2019, I will eat a Redskins hat live on Youtube. I am not even kidding. But while Peterson may not be as explosive as he once was, he’s still pretty danged good—he piled up 1,042 rushing yards and seven scores last year and averaged a respectable 4.2 yards a carry. The next NFL carry that Derrius Guice gets will be his first. Chris Thompson, talented though he may be, gets hurt buying groceries. Peterson’s going to lead this backfield again in 2019—and destroy this ADP.

Age and perceived competition make Peterson one of my top running back sleepers for the coming season.

With Tevin Coleman departing the Falcons for the San Francisco 49ers in free agency, Smith will enter his second NFL season as the clear No. 2 back in Atlanta behind Devonta Freeman. Fansided’s Branden Peplowski wrote that could pave the way for a breakout campaign.

“Smith can thrive under Dirk Koetter, the offensive coordinator in Atlanta,” he said. “Koetter believes in a more balanced attack on offense, so the fifth-worst rushing attack in the league should be improved this season. Another benefit for Smith is he’s now the second-string running back with Tevin Coleman signing in San Francisco during the offseason. Lastly, the offensive line is going to be vastly improved, opening up lanes to run through.”

I will freely admit that I’m high on Freeman’s chances of a rebound season in 2019, although his rising ADP is starting to suck some of the fun out of that idea. But Freeman’s also trying to rebound from an injury-marred 2018 season in which he managed just 91 yards on 19 touches—for the year. Smith only averaged 3.5 yards a carry last year, but the coaches thought enough of him to eschew adding any backs of note in the offseason. At the very least he’ll be called on to spell Freeman—he’s a relatively inexpensive “handcuff” type with the potential to easily become much more if Freeman gets hurt again. Running back sleepers are quite often of the handcuff variety and Ito Smith may be at the head of that class.

Safety Keaton Harrison played with Damien Harris at the University of Alabama. And while the former won’t get a chance to tackle Harris in the NFL, he told Kevin Duffy of the Boston Herald that after years of trying in practice he doesn’t envy the people who will.

“When you try to tackle him, he’s very thick-bodied,” Anderson said. “If you think you can hit him straight up, chest to chest, it’s probably not your best bet. Really physical runner. And this is what I’ve always seen with him: He’s a tremendous pass blocker. He’ll sit in the hole and take on a 260-pound linebacker and deliver a blow. The blow isn’t being delivered to him. This day and age, running backs want the ball, but they don’t want to do that.”

That the Patriots spent a third-round pick on Harris one year after burning a first-rounder on Sony Michel tells you a little about both how much the team values Harris’ talent and how concerned they are about Michel’s knee issues—issues that have already resulted in a cleanup procedure that cost him most of OTAs and minicamp. New England has averaged almost 18 rushing touchdowns a season over the past three years—ranking inside the top-six in the league every year over that span. He’s more than worth a flier given how late he’s being taken on draft day.

Anderson’s late surge last year didn’t do a lot for most fantasy owners—although his 20/167/1 line in Week 16 may well have won some hearty souls championships. The 28-year-old bruiser told Nate Atkins of MLive that he’s eager for an opportunity to do even more in 2019 in the Motor City—especially since the Lions brought in a power-running OC in Darrell Bevell.

“I just think that meshes well when you start adding Darrell Bevell and what he’s done in the past in Minnesota and Seattle with AP and Marshawn Lynch, Thomas Rawls, you can name back after back,” Anderson said. “It was a perfect fit. I’ve done everything that a complete back would want to do. I’ve had some times where I’ve put it together for 16 games and you get rewarded with Pro Bowls and things of that nature, and I’ve done it at that level, too. It’s just finding the right opportunity, get another 16 again, put a full 16 together and hopefully find a home.”

Anderson averaged a ridiculous seven yards a carry last year with the Rams, but the reality is that his carry-share likely won’t be consistent enough for him to be fantasy relevant unless something happens to Kerryon Johnson. Here’s the thing though—something happening to Johnson is hardly unprecedented. Johnson was great on a per-touch basis as a rookie, but he also missed six games.

As last-round lottery tickets go, you could do a lot worse.

Are you onboard with Gary’s running back sleepers for 2019? If so you need to head on over to the 2019 Fantrax Fantasy Football Draft Kit for more great strategy, analysis, and rankings.