Pass on Todd Gurley If You Want to Lose at Fantasy Football! 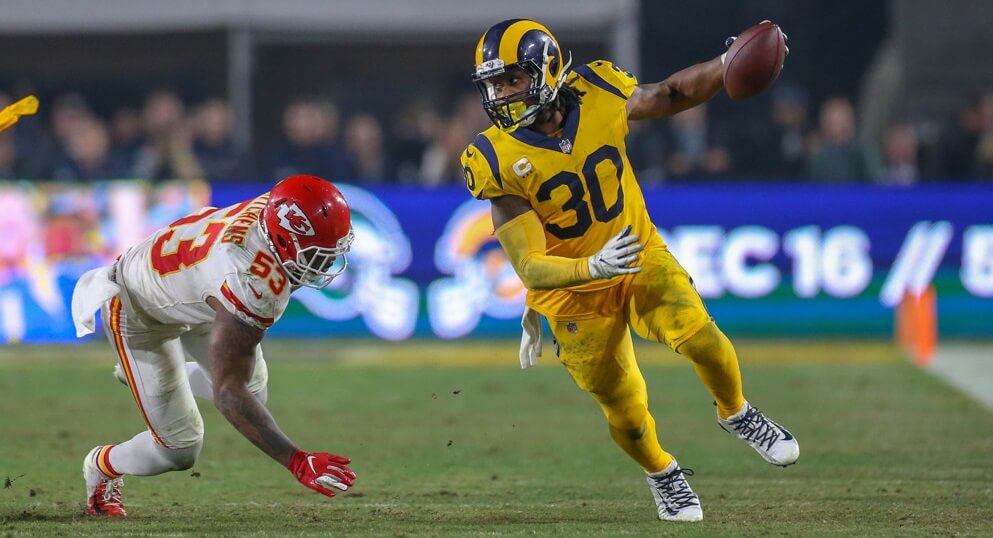 Unless you live under a rock, you have heard about Todd Gurley and his knee this offseason. The reports range from Gurley having arthritis and being on a touch limit, to Gurley is sure to miss games, to his knee is going to implode the minute it touches turf in Week 1. The last one may be exaggerating a tad, but you know what I mean: there has been no shortage of Gurley knee reports this offseason.

It has led to many fantasy analysts telling you to fade Todd Gurley all together, and the player who was a lock to be the first overall pick just a few months ago, is now going off the board at the end of the first and even in the second round as of late. As Gurley, arguably the fantasy MVP while healthy each of the last two seasons, continues to fall, the question needs to be asked: are we overreacting and leaving a ton of value on the board?

The Status of Todd Gurley’s Knee

While there have been negative reports, there have been a number of positive reports indicating that the injury is real, but being overblown. In fact, reports have also indicated that Gurley could see between 17-22 touches per game, and the Rams are just attempting to limit his touches early on so they do not burn him out down the stretch like they did last season. That is important, because the Rams are playing this close to the vest and we do not know the official plan, but if the reports are accurate, we know Gurley will still see the necessary volume to be an RB1.

Why is that? Because Gurley has been very effective in his recent dominant run with Sean McVay. Last year, Gurley averaged 1.18 PPR fantasy points per touch, the third most among running backs with at least 250 touches. In 2017 he averaged 1.12 PPR point per touch (PPT), whereas no other running back with 250 touches averaged a point per touch. If you combine his last two seasons he has averaged 1.15 PPR PPT, the fifth most among RBs in that span. However, two of those ahead of him are James White and Tarik Cohen, who see significantly less volume. That 1.15 PPR PPT in the last two years can help us figure out what to expect from a volume-limited Gurley.

If the reports are accurate, let’s plan for the lower end. Let’s say the 2019 NFL season will take place in a world where Gurley averages 17 touches per game. If he plays in 16 games that will leave him with 272 touches, which still would have been the eighth most among RBs in 2018. If his efficiency does not take a hit, you can simply multiply 1.15 to get to 312.8 PPR points. That is a far fall off from the 372.1 he scored in 14 games last year, but would still be the fifth most among RBs in 2018 (not including Gurley), behind only the RBs making up the first four picks of pretty much every draft.

I led off with the pessimistic view, but for those of you who like to view life with a glass half full viewpoint, let’s say the efficiency doesn’t fall off and he continues to average 1.15 PPR PPT, just like he has the past two years (it was higher in 2018). Now, let’s say those reports are correct and the Rams decide to give him 22 touches per game. Well, that would lead to him finishing with 352 touches, which would have tied for the second-most among backs last year. That would have him finishing with 404.8 PPR points, the top RB in the league. This is not the most likely scenario, but again, it showcases his ceiling is still enormously high.

The Worst Case for Todd Gurley

A number of things would have to happen for things to go completely wrong for Gurley in 2019. The most likely is that he is forced to miss time. He is at an elevated risk of injury and there is no denying that, but we are talking about the position that provides the least injury stability in all of fantasy sports. Even if Gurley were to miss time, he would be a worthy pick while he is on the field.

The other is that the reports are wrong and that the Rams plan to use Gurley significantly less than 17 touches per game. This does not seem that likely to me, and although they have invested in backup backs, that seems more like a depth play than a “let’s hardly get Gurley on the field,” one. Lastly, the third outcome that can lead to Gurley being a bust is that his efficiency is just gone. That he is no longer the Gurley of old, but more like the back that we saw in the playoffs and Super Bowl last year. It is in the realm of possibilities, but given the offense he plays in, this is the least of the three concerns to me.

I wrote earlier this offseason that there are fewer and fewer workhorse backs in the NFL and that you should be looking to invest an early pick on a back that gets you 250-plus touches. Well, even at 17 touches per game, Gurley can get to that number. There is injury risk, but it is tied into the ADP. Sure, you are not getting a multi-round discount on Gurley, but if it was not for the knees he is going in the first two or three picks off the board and inside the Top 5 unquestionably. Due to the discount in price, and the upside that he possesses, Gurley would be worthy of picking as an RB1, at the end of the first round, but more ideally in the second round. Additionally, it is not like those RBs going around Gurley are not without warts of their own.

I recently selected Gurley 11th overall, yes still in the first round, in an industry mock draft that I am participating in. There were a number of different running backs on the board that I also considered, each with their own varying case to be made over Gurley. But at the same time, each has a case you make against taking them over Gurley.

The Knock Around the Backs Going Around Gurley

James Conner seemed to be the next up in a short list of workhorse backs under Mike Tomlin. That was until a number of offseason reports indicating that the Steelers could look to utilize Jaylen Samuels and perhaps even rookie, Benny Snell, more this season. That would be something completely new for Tomlin, who always elects to ride one RB. I had Conner ranked ahead of Gurley until these reports came out. He may have a high ceiling as the Steelers lead back, but it isn’t as high as Gurley. If there is now reason to question the floor of Conner, then you can make the case to chase Gurley and his higher ceiling.

Joe Mixon has been going in the first round and ahead of Gurley in recent drafts. That is not a bad call by any stretch, but Mixon does not come without concerns himself. He has missed two games in each of the last two seasons and is in a far inferior offense, who just lost top rookie lineman Jonah Williams for the season. There is now some health and o-line questions with Mixon. I am fine taking him over Gurley, but they belong in the same range.

Dalvin Cook has the potential to be an RB1 for sure. Does he have the ability to finish as the RB1? I don’t think so, which is why I simply could not take him over Gurley. In his first two years in the NFL, he has played a total of 15 games. I cannot leave Gurley on the table because I am scared of his health, and take Cook over him.

Nick Chubb has a strong case to go over Gurley, but he was seldom used in the passing game last season. As long as the Browns have Duke Johnson, he has not yet been traded, that concern will always be there, as Johnson is one of the leagues premier pass-catching backs. Plus, Kareem Hunt does rejoin the Browns in Week 10. I like Chubb a lot, but I will not be selecting him over Gurley unless we get awful news regarding his knee.

Damien Williams has the upside to be a Top-5 RB this season. Why? That is because the Chiefs running backs last year were the most effective in recent history in the passing game. They averaged 9.51 receiving yards per target in 2018, which is not only the most since at least 2000, but no other offense was even within a yard from that mark. However, there are also durability concerns with Williams, as his career high in touches is 73, last year with the Chiefs. Williams is another back that I like, but given the uncertainty around the Tyreek Hill situation, which greatly impacts the RBs success in the passing game, plus the durability concerns, I cannot take him over Gurley.

Still not sold on Gurley? Tell me why you disagree on Twitter, @MichaelFFlorio!

If enjoyed this read, head on over to the 2019 Fantrax Fantasy Football Draft Kit for more great strategy, analysis, and rankings.