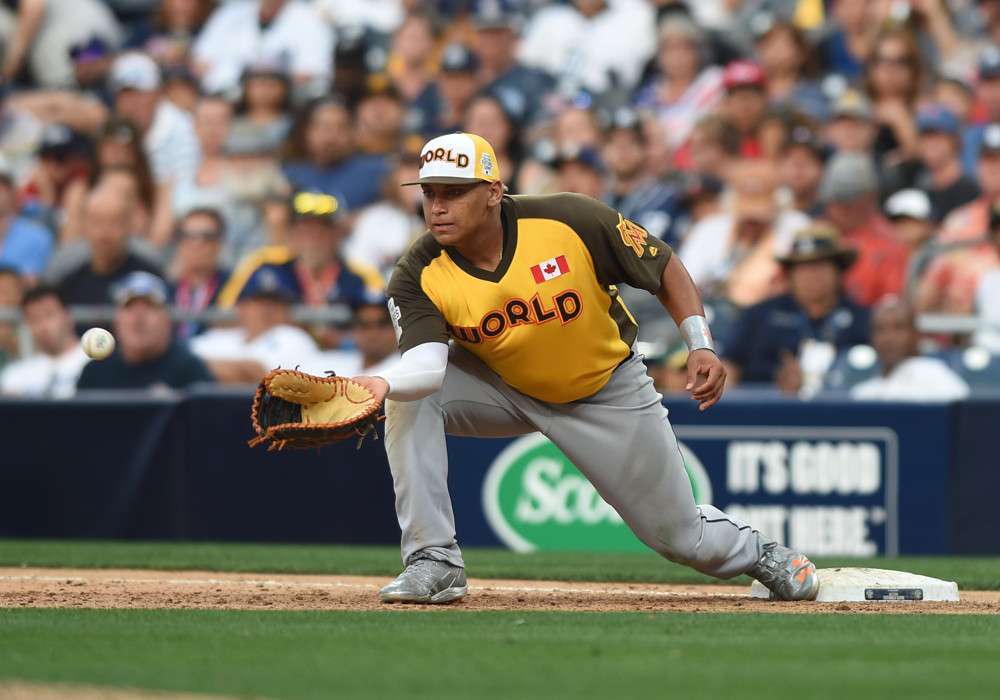 With the World Series just around the corner, the 2017 Major League Baseball season is close to wrapping up. For most teams, as well as their Minor League affiliates, the season ended almost a month ago. The San Diego Padres were one of the worst teams in baseball for another straight season, finishing 71-91 and fourth in the NL West. While there might not be too much hope on the Padres right now, there is plenty waiting down the pipeline, including top prospect MacKenzie Gore.

A second straight Futures Game selection helped Naylor reach Double-A at just 20 years old in 2017. He has a natural feel for hitting and great power from the left side. That, combined with his top-notch hand-eye coordination, lets him hit for both average and power. While he’s still growing into his power, he did show it off at times this season. Between the two levels, he homered 10 times and collected 25 doubles. Naylor’s numbers dipped a bit after moving up to Double-A, but he still posted a .280 average on the season. Despite his very poor speed, Naylor knows how to steal a base and has shown he can mix them in on occasion. He should start next season right where he left off and improve his already rising stock.

Lucchesi’s first full season could not have gone much better. Since finishing college, Lucchesi’s stuff has only gotten better, and he’s benefited from it in his time as a pro. In 78.2 innings at High-A, he kept hitters batting under .200 and posted an ERA of 2.52 and 0.95 WHIP. His strikeout-to-walk numbers were staggering, as he posted a 5:1 strikeout-to-walk ratio. After being promoted to Double-A, his numbers only got better. In 60.1 innings, he posted an even lower ERA (1.79) and a 0.99 WHIP. He didn’t strike out as many batters as he did at High-A, but his stuff was still superb. Lucchesi put his name on the radar in his first full season and could be on the fast-track to the Majors at 24 years old.

Lauer put together a good season and earned a promotion to Double-A in just his first full season. Across the two levels, he threw 122.2 innings and posted a 3.30 ERA and a 1.25 WHIP. His four-pitch arsenal, along with great control, helped him strike out 132 batters while walking 36. While nothing is spectacular about Lauer’s stuff, he projects to be a very solid middle-of-the-rotation starter.

No one in the Padres’ system throws harder than Baez. The Cuban righty hits triple digits with his fastball regularly, and it’s transitioned well from Cuba to the States. After making a quick start at the Rooke-level, Baez spent most of the year at Single-A Fort Wayne. He made 10 starts and averaged just about six innings per outing. While his 2.45 ERA and 0.84 WHIP are impressive, it was his strikeout-to-walk ratio that blew scouts away. In 58.2 innings, he struck out 82 batters while walking just eight. He needs to work on repeating his delivery, as well as his secondary pitches, but Baez has an incredibly bright future.

The young righty was a huge piece in the deal that sent Drew Pomeranz to Boston last season. He has great control and an even better mix of pitches. His fastball works in the high-90s and is complemented by a curveball and changeup, both of which are well on their way to being plus pitches. Unfortunately, Espinoza was forced to start the season on the disabled list with right forearm tightness. He never threw a pitch and ultimately underwent Tommy John surgery in August.

There was just one player that ranked higher than Morejon on MLBPipeline’s international free-agent list a year ago. Even though he’s just 18, Morejon’s stock has already begun to skyrocket. He has great control and can throw strikes consistently with all three of his pitches. While his fastball currently sits in the low-90s, he should easily see his velocity tick up as he grows into his body. Morejon split time between two Single-A levels in 2017 and performed well in both of them. In the two levels combined, he posted a 3.86 ERA and 1.29 WHIP over 63 innings.

At 18 years old, Tatis Jr. is coming off a breakout season in 2017. He tore up Single-A at all parts of the game and earned a quick promotion to Double-A. In 117 games at Single-A, he batted .281 with 21 homers and 29 stolen bases while working 75 walks as well. Tatis Jr. has already come a long way since he was signed as a 16-year-old a couple of years ago and doesn’t appear to be slowing down anytime soon. His pace slowed when he was called up to Double-A, but he still has all the makings of a future All-Star.

The Padres have seen the 15-year-old kid they signed in 2013 develop into one of the best young prospects in baseball over the past two years. Last season he won the batting title and MVP award despite being the youngest player in the league on Opening Day. This year he brought more of the same to the plate, batting .296 the whole year. Urias’ plate discipline is well beyond his years and complements his ability to make hard contact nicely. He walked more times than he struck out (68:65) at the Double-A level. Urias may only be 20, but his development is already well underway and he could find himself on the fast-track to the Majors sooner rather than later.

Quantrill put his 2016 Tommy John surgery another year behind him with a solid campaign in 2017. He started the season at High-A Lake Elsinore, where he posted a 3.67 ERA and 1.38 WHIP in 73.2 innings before being called up to Double-A. He had a little trouble adjusting to the higher competition at Double-A but still posted respectable numbers in 42.1 innings with the Missions. Quantrill hasn’t quite been let loose yet, as the Padres are still being cautious with their young righty. Regardless, he’s still the No. 37 prospect in baseball according to MLB.com, and once he is given free rein, expect a breakout season from the 22-year-old.

Gore was considered to be the top prospect in this year’s Draft by some scouts, so the Padres were happy to land him with the No. 3 selection. Gore absolutely dominated in his last two years of high school and carried that success over at the professional level. In seven starts with the Rookie-level Padres, Gore posted a 1.27 ERA and 0.98 WHIP in 21.1 innings. He walked just seven batters while striking out 34. The 18-year-old is a competitor and has responded well to instruction and direction. His fastball velocity has been trending upward, and his curveball, slider, and changeup are all already above average. Gore is destined to be a future ace if he can stay healthy and develop the way he is projected to.