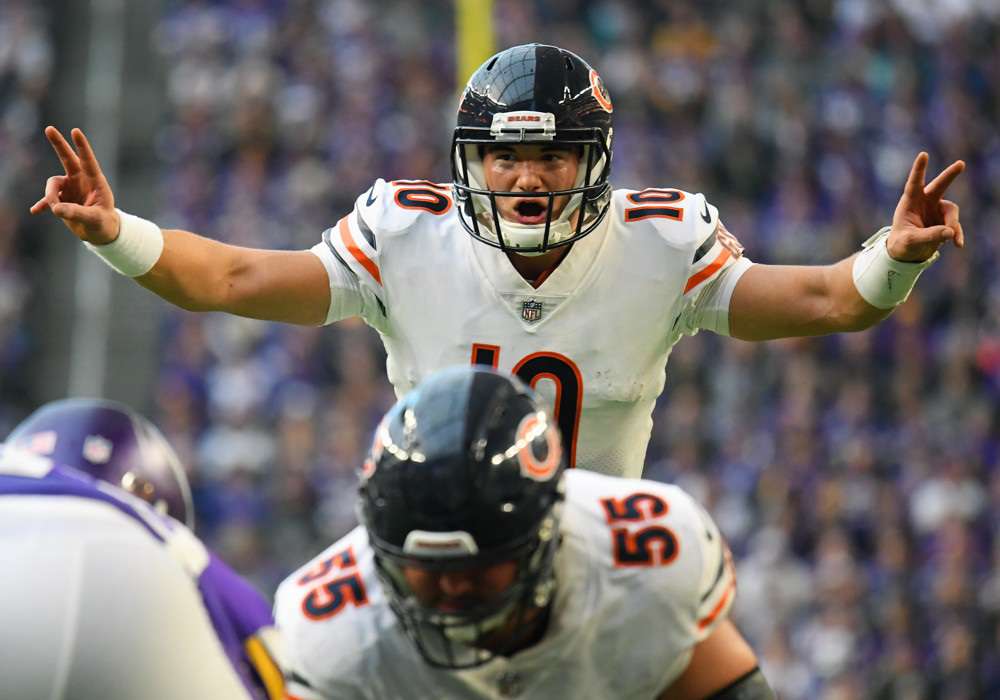 As usual, a couple of unexpected names found their way among Week 7’s leaders in fantasy points. Among them was Mitchell Trubisky of the Chicago Bears. The No. 2 pick in the 2017 NFL draft struggled to begin the season. But since Week 4, Trubisky has unleashed a fury upon opposing NFL defenses. Trubisky has been an elite fantasy quarterback ever since and is in a prime spot to have another outstanding game in Week 8. Here are my thoughts on Trubisky and some more of my favorite Week 8 quarterback sleepers.

Don’t look now, but Mitchell Trubisky has posted three straight Top-5 fantasy finishes. Despite this, the second-year quarterback out of North Carolina continues to be ranked outside the Top-12 at the position. Trubisky continues to outperform expectations on a weekly basis, and I believe he will do so once again in a matchup with the New York Jets.

An underrated part of Trubisky’s game is his ability to run. We are fast approaching the area where this is no longer the case. Trubisky is second among all quarterbacks in rushing yards. The Jets have not seen many running quarterbacks this season but allowed the third-most rushing yards to opposing quarterbacks a year ago. I believe the prowess in the running game raises Trubisky’s floor enough to mitigate concern about his passing ability. New York has also allowed four 300-yard passers and given up multiple touchdowns to five-of-seven quarterbacks so far this season. It’s not as if Trubisky cannot do damage through the air as well in this game. It would not surprise me at all to see Mitchell Trubisky post a fourth consecutive Top-5 weekly finish. At the very least, he should be a Top-12 fantasy quarterback in this matchup.

Andy Dalton laid on egg on Sunday night in what was supposed to be an easy matchup. Dalton threw for just 148 yards and one score in a blowout loss in Kansas City against the Chiefs. Dalton finished as just the QB25, not an easy task in a week where four teams were on a bye. He finished behind Cody Kessler and just ahead of Lamar Jackson. Yikes. Despite the disappointing effort, Dalton has an opportunity to redeem himself when the Bengals host the Tampa Bay Buccaneers on Sunday.

We have learned to target Tampa Bay whenever possible, and this week is no different. Baker Mayfield did not post the crazy numbers we have gotten accustomed to seeing against Tampa Bay last week but still finished sixth among quarterbacks in fantasy scoring for the week in Cleveland’s loss. Dalton should post similar results against a defense which has already allowed over 2,000 passing yards in just six games. After such a large dud on national television, many people will be off Dalton this week, making him the poster cild for my Week 8 quarterback sleepers. Fire up the Red Rifle this week.

I’m back on Baker Mayfield, who posted the overall QB6 fantasy finish in a prime matchup against Tampa Bay last week. Mayfield gets another good draw this week when he gets the first taste of the Cleveland Browns-Pittsburgh Steelers rivalry.

Opponents have thrown and thrown often against the Steelers. Pittsburgh has seen the fourth-most attempted passes per game this season. And this trend is likely to continue until Pittsburgh can improve their pass defense. They have been able to generate pressure with 22 sacks, but they have also allowed 15 touchdown passes, tied for fifth-most in the NFL. Pittsburgh has also permitted four opposing signal callers to eclipse the 300-yard mark.

Conversely, Pittsburgh’s defense has been steady versus the run this season. They have allowed less than 100 rushing yards per game on the year. This is also a game Pittsburgh is heavily favored in. If Cleveland falls behind early, they may be forced to abandon the running game and attack through the air. The matchup and likely game flow make this an intriguing spot for Mayfield. Another top-six finish is not as likely this week, but Baker Mayfield should continue to be an undervalued commodity and a solid source of fantasy production.

Carson Wentz has come along nicely since his return from a torn ACL. The third-year pro has completed over 70 percent of his passes and has averaged just over 300 passing yards per game. Despite these numbers, many will shy away from Wentz in both season-long leagues and DFS this week due to a matchup with the Jacksonville Jaguars. I think Wentz has a real chance to be a QB1 this week despite the difficult matchup.

Philadelphia’s best chance to move the ball against Jacksonville’s stingy defense is to put the ball in Carson Wentz’ hands. The trio of Corey Clement, Wendell Smallwood, and Josh Adams combined for just 55 rushing yards on 21 carries last week, and do not figure to fare much better against the Jaguars. Wentz has averaged 39 attempts per game this season, and I believe that number will increase on Sunday. The added volume should be enough to boost Wentz into top-12 consideration. Jacksonville has also struggled recently against running quarterbacks. Wentz has understandably not been as mobile this season, but I think he is smart enough to use his legs when necessary. I can see him running in for a short score in this game. Carson Wentz will be faded by most this week, which is exactly what makes him one of the better Week 8 quarterback sleepers.