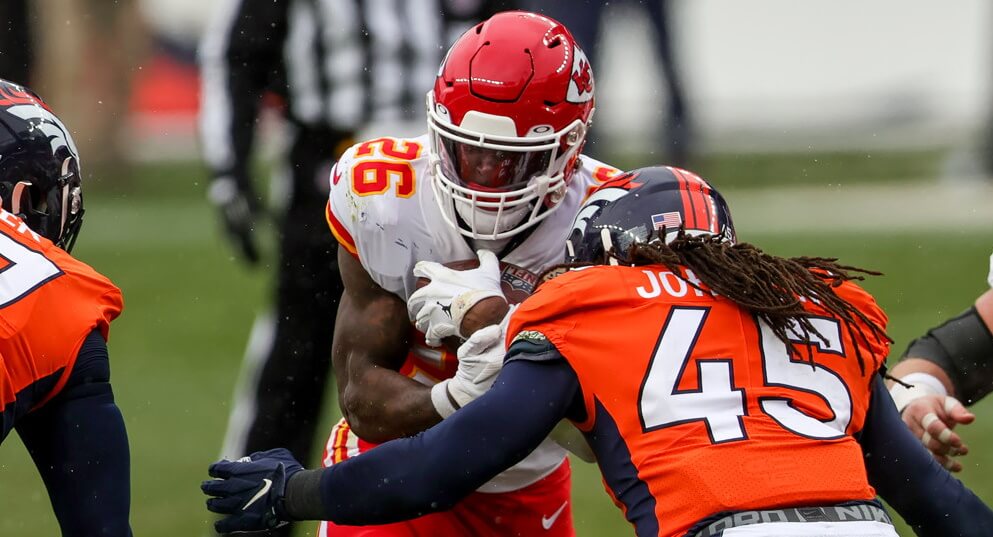 The grind of the NFL season has taken its toll in recent weeks, especially on the running back position. Aaron Jones, Joe Mixon, and Miles Sanders are among the high-profile running backs who sat out last week’s games due to injuries. All three have been held out of practice so far this week, and are very much questionable for Week 8. Fantasy managers with Jamaal Williams, Giovani Bernard, Giovani Bernard’s mustache, and Boston Scott hope they can get another week of increased production out of their low-cost picks. All three backups posted top-10 fantasy finishes last week. There are also four additional top-18 fantasy backs whose teams are off this week. That means the Week 8 Flex rankings feature plenty of names we would not have expected even just a few short weeks ago.

The Seattle-San Francisco game may see some barely used running backs see significant action. Seahawks running backs Chris Carson, Carlos Hyde, and Travis Homer all suffered injuries in Seattle’s overtime loss in Arizona. I expect Hyde and Homer to play, but time will tell. Meanwhile, Jeff Wilson blew up for three touchdowns in San Francisco’s rout of New England but suffered a high-ankle sprain on his third score that will keep him out for at least four weeks. He joins Raheem Mostert on injured reserve. JaMycal Hasty (51 percent rostered in Fantrax leagues) becomes a very interesting option this week. Keep an eye on the status of Tevin Coleman, however. The 49ers designated the veteran able to return off injured reserve, so he may suit up for this pivotal matchup.

The Kansas City Chiefs host the New York Jets in the most lopsided matchup of the entire NFL season. Vegas lists the Chiefs as 19.5-point favorites, and that seems way too low to me. The Jets have already lost four games by at least 18 points, and have not faced an offense as talented or diverse as Kansas City’s. Offensive coordinator Eric Bieniemy has the Chiefs entering Week 8 as the NFL’s best offense based on DVOA. Perhaps Jets CEO Christopher Johnson should make the trip to Kansas City this week and chat Bieniemy up a bit. Maybe pick his brain a little about offensive strategies, find out if he is free for a more formal discussion during the week of January 4th, that sort of thing. I’m just spitballing here.

Anyway, it was hard to glean too much about how the Chiefs will utilize former Jet and recently acquired running back Le’Veon Bell based on last week’s game. The Chiefs ran just 51 offensive plays while riding their defense and special teams to an easy victory in Denver. Bell played 33 percent of offensive snaps, while rookie standout Clyde Edwards-Helaire was on the field for 53 percent. CEH (can we still call him that knowing the “H” is silent?) out-touched Bell 9-6, so it was roughly a 60-40 split in both snaps and touches during their first game sharing backfield duties. I believe Kansas City will integrate Bell into the passing game, and that could begin as soon as this week. Edwards-Helaire has averaged five targets per game but has averaged just 5.54 yards per target without a score. He also dropped a would-be touchdown in last week’s win.

The Chiefs can probably pick and choose how they would like to score touchdowns on Sunday. We know that Bell will be chomping at the bit to stick it to his former team. I fully expect Bell to have a feelgood moment in his first home game at Arrowhead Stadium. Bell may not log more than a dozen or so touches, but that should be plenty enough for him to put up double-digit fantasy points in what should be a lopsided victory. With all of the injuries and uncertainty surrounding several starting running backs this week, I would not hesitate to start both Chiefs running backs in this game. I would consider Edwards-Helaire a low-end RB1, with Bell being a solid Flex play.

Henry Ruggs has already exhibited his weekly boom or bust potential in his first four NFL games. His weekly finishes among wide receivers in fantasy points so far are WR42, WR118, WR9, and WR65. That can be maddening for fantasy managers, especially since it seems Jon Gruden and his coaching staff are not allowing Ruggs to create after the catch. The rookie is mostly running fly patterns in an attempt to get behind the defense, but that quickly becomes predictable. I am hopeful that Gruden can get the ball to Ruggs in space and let him create after the catch. Even if he insists on keeping Ruggs a one-trick pony for another week, however, I like the odds of Ruggs making a big play this week in the Raiders’ matchup with the Cleveland Browns.

Cleveland tends to leave their corners in one area of the field, choosing not to shadow opposing wideouts. Denzel Ward, Cleveland’s best (and fastest) cornerback, plays on the left side of the formation 95 percent of the time. Ruggs should line up plenty against the combination of Terrance Mitchell and Kevin Johnson quite a bit, and neither can keep up with Ruggs’ 4.27 speed. Safety Ronnie Harrison has been a revelation for Browns defensive coordinator Joe Woods in recent weeks. Woods may have Harrison provide bracket coverage on Ruggs when he avoids Ward’s coverage pre-snap. But Harrison himself only runs a 4.63 40-yard dash and had not been very effective before this month. I think Ruggs can make a big play or two in a game with the third-highest implied total on this week’s slate. As such, his placement in my Week 8 Flex rankings is relatively high.

What’s Halloween weekend without a little Juju? Juju Smith-Schuster, that is. The Pittsburgh Steelers star wide receiver finally broke out of his mini-slump in Week 7. Smith-Schuster had season highs in routes run, targets, receptions, and receiving yards in Pittsburgh’s win in Tennessee. He finished as a top 30 fantasy receiver last week, and his managers have restored faith in the 23-year old. However, I expect him to struggle this week against the Baltimore Ravens. I have Smith-Schuster behind fellow Steeler wide receivers Diontae Johnson and Chase Claypool in my current rankings based on his individual matchup.

I expect Smith-Schuster to square off against Ravens slot corner Marlon Humphrey on a majority of snaps. Pro Football Focus ranks Humphrey 10th out of 116 cornerbacks in coverage. The two fourth-year players have a limited history against one another in their careers. Smith-Schuster has caught 3-of-5 passes against Humphrey for 49 yards and a touchdown. However, he also has a drop, and Humphrey forced a fumble that essentially won Baltimore a game against their divisional rivals last season. I do not expect Smith-Schuster to thrive in this matchup. Fantasy managers may want to start him given his upside, but I would temper expectations.

Below are my Week 8 Flex rankings. Several players are currently ranked low simply because I do not expect them to play. If Michael Thomas is deemed healthy for example, he becomes a must-start and moves up significantly. I will update these rankings on Sunday morning but feel free to comment below or on Twitter in the meantime with any questions you may have about your Week 8 lineups.

If you found Mick’s Week 8 Flex Rankings helpful, make sure to check out the rest of our NFL Week 8 Slate of Analysis.