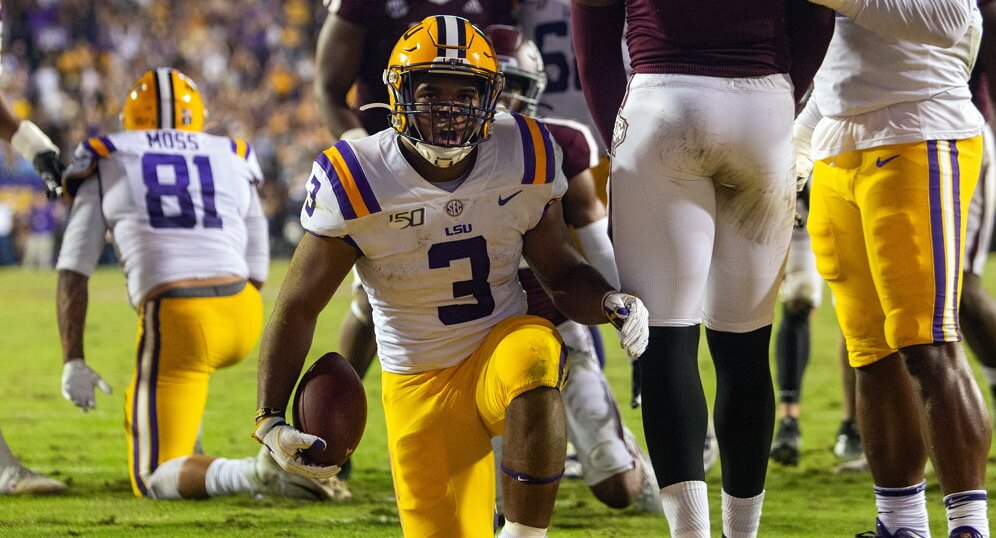 Week one of the Big Ten and Mountain West football is in the books. The Wisconsin-Nebraska, North Texas-UTEP, and Marshall-Florida International games have already been canceled. Also, injuries have rearranged depth charts and caused havoc on CFF rosters. It is very likely that college fantasy football diehards need to find suitable replacements on the waiver wire. I locate some of the under-the-radar college fantasy football sleepers to acquire and insert into lineups for Week 9.

For years, I picked up, started, and dropped Alan Bowman on my CFF rosters. The oft-injured signal-caller owns elite skills in a high-flying aerial assault but Bowman just cannot stay healthy.

On Saturday, Henry Colombi started his first game for the Red Raiders and led the team to an upset victory over West Virginia, 34-27. He passed for 169 yards, rushed for 40, and totaled two touchdowns.

Colombi originally enrolled at Utah State after being recruited by former Aggies and current Red Raiders coach Matt Wells. For two years, he sat begin Jordan Love and transferred after the coaching staff moved to Texas Tech. With Bowman the entrenched starter, Colombi decided to relocate anyway and backup the returning gunslinger.

After the game against the Mountaineers, the latest Red Raiders’ triggerman has earned another start against Oklahoma this weekend. In preparation for the upcoming game against Texas Tech, Sooners coach Lincoln Riley praised the new starter in Lubbock, Texas.

“It’s been interesting to see with the new guy (Colombi). I would think they continue to gain some confidence in him and continue to open it (up) for him. But they’re doing a lot of good things, and they’ve always been creative offensively and do a good job of mixing tempo and different formations and challenging you in different ways,” Riley proclaimed after studying the film (henryherald.com).

In the pocket, Colombi has a calm and poised demeanor. He also innately keeps his eyes downfield when scrambling to spot the open receiver and keep the chains moving. The Red Raiders are big underdogs on the road, and Colombi could easily attempt 40 passes in comeback mode in Norman, Oklahoma. For this reason, he has to be mentioned among this week’s college fantasy football sleepers.

While watching Michigan defeat Minnesota, I could not believe that Joe Milton remained on the bench last year. How could he not unseat Shea Patterson? The 6’5” and 243-pound signal-caller played so well in the victory on Saturday night.

During his first two seasons on campus, Milton attempted only 11 passes, completed six for 117 yards and tossed one touchdown. Against the Golden Gophers, he connected on 15 of 22 throws for 225 yards and a touchdown. He added 52 yards rushing and another touchdown on the ground.

Clearly, I was not the only one impressed with Milton’s skills and performance. “(Milton) played with great poise. He was comfortable in the pocket. He’s done a good job of progressing and learning and continuing to get better, which he still is (every day),” QB coach Ben McDaniels said Wednesday (maizenbrew.com).

As a high schooler, 247Sports graded Milton as a four-star prospect out of Orlando, Florida. He owns a big arm and easily hits receivers in stride down the field. All of Milton’s skills were on display against Minnesota, and perceptive CFF owners took notice. The Wolverines have won three of the past four games against the Spartans, and Milton makes it four of five with another outstanding performance.

Who Ya Got this week in college fantasy football as a replacement QB starter?

“Some very good options and Carson Strong may be the favorite in the group, but I may actually prefer Fred Payton since it seems Grayson McCall will be out again for Coastal Carolina.” @CFBWinningEdge

“Michael Penix vs. Rutgers is a nice matchup this week. It should be a coming-out party for the Indiana offense that struggled last week vs. Penn State.” @JustinNottingh6

All summer, college fantasy footballers sought to identify the starter in the Tigers’ backfield? Would it be John Emery, Jr. or Chris Curry? Unfortunately, few analysts and fans recognized Tyrion Davis-Price as a possible game-breaker.

Last week, Tyron Davis-Price rambled for 135 yards on 22 carries and scored once. He now leads the team in attempts (50) and yards (245). He has also secured three passes for 21 yards.

Coach Ed Orgeron adores his terrific twosome with Davis-Price and Emery in the backfield. Both runners joined the program in the 2019 recruiting class, and Davis-Price was a four-star prospect. “We’re real competitive with each other, friendly competition, just making each other better. Compete, compete, compete. That’s all we talking about through practice. At the end of the day, we all want to see each other make it to the next level,” Davis-Price stated (wgno.com).

Once again, the Tigers employ one of the more explosive offenses in the nation, scoring 42 points and accumulating over 484 total yards per game. I want a piece of the LSU attack and Davis-Price remains on the waiver wire in over 60% of leagues. Scoop up the rising star before the fantasy community wises up to his upside potential.

In 2018, I recommended Greg Bell as a waiver wire gemstone after he opened the season with a 103-yard performance against Colorado. As a Cornhusker, he only played in four games and transferred before the fifth one.

After high school, Bell enrolled at Arizona Western Community College and was a back-to-back JUCO All-American. He rushed for 2,404 yards and scored 18 touchdowns. He chose Nebraska over Arizona and Arizona State.

At 6’0” and 200-pounds, Bell did not suit up last year and has only one more season of eligibility. He kicked off his final crusade last week against UNLV as a member of the Aztecs. He rambled for 111 yards on 19 attempts and scored once.

“It’s been 25 months since Greg has played. I know how excited he was to get out there. He had shown us something during fall camp…that he was going to be one of the guys we wanted to get the ball to,” coach Brady Hoke said (sandiegouniontribune.com).

I could not have been more incorrect recommending teammate Jordan Byrd as a sleeper for CFF owners last week. In order to win and improve rosters, it is imperative to pivot when wrong, and am advocating for Bell this week in a marvelous matchup against Utah State.

Who Ya Got this week as an emergency replacement in the backfield?

“I didn’t get to watch the game, but I remember Greg Bell at Nebraska and he has talent. SDSU always has a strong running game. I would take a flyer on Bell.” @aceholesrule

“I am going with T.J. Pledger: He has been consistent for the last several weeks.” @JustinNottingh6

When I learned that QB Grayson McCall would not start against Georgia Southern last Saturday, I looked over my rosters with Jaivon Heiligh to see if I had a better option on the bench.

After mulling over the choices, I kept Heiligh active on two of my three CFF teams. The decision paid off as the Chanticleers’ aerial attack continued to soar. Heiligh recorded five receptions for 107 yards, averaging 21.4 ypc.

Hauling in at least one pass in each game, the junior has now corralled a pass in 20-straight contests dating back to his freshman year. In 2019, Heiligh emerged as the top target for Coastal Carolina on the outside, pacing the squad with 46 catches and 497 yards, and was tied for second with three receiving touchdowns.

At 6’2” and 190-pounds, Heiligh worked throughout the offseason on improving speed and quickness. The results are clearly evident on the field in 2020: He tops the club in catches (25), yards (434), and touchdowns (4) while averaging 17.4 ypc. Over the past three games, he has 20 receptions for 308 yards and two touchdowns.

Coastal Carolina travels to Georgia State for another game with a high-scoring result projected. Even if Fred Payton starts at quarterback, Heiligh will be productive against the Panthers.

I have pounded the table for a couple of weeks to pick up Xavier Hutchinson on CFF rosters. Apparently, no one heeded my suggestion so I will make the case once again.

In the nation, Hutchinson ranks 34th with 40 targets among receivers. He tops Iowa State with 28 receptions and 297 receiving yards. He also leads the Cyclones with a 25.8 team target share of passes. Why is Hutchinson still being ignored by the fantasy community?

Opponents have produced impressive results all season against the Jayhawks: Jaivon Heiligh (3-74-1), Tylan Wallace (9-148-2), Bryce Ford-Wheaton (5-89-1), and Deuce Vaughn (11-71-1). The Cyclones’ offense funnels touches to Hutchinson and RB Breece Hall, and both will get plenty of opportunities on Saturday.

Who Ya Got this week as a one-week starter at wide receiver?

“Romeo Doubs might be worth a full-time spot.” @CFBWinningEdge