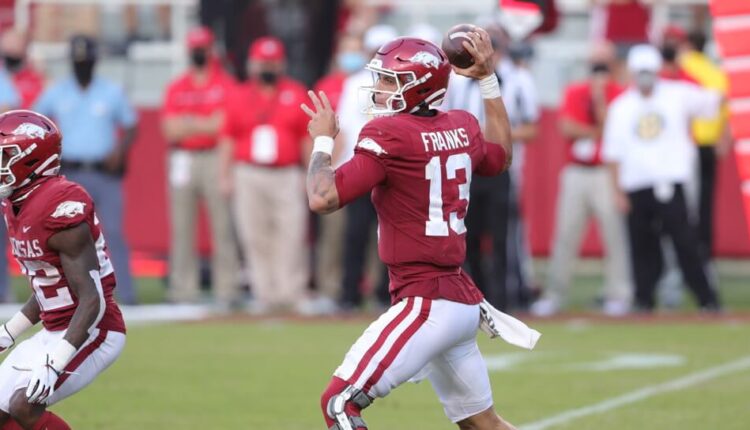 On Wednesday, I went into my high school for the first time this fall—our district is engaged in virtual learning—to proctor SAT exams for our scholars. Every year I enjoy using the nearly four-hour exam to research the upcoming contests in college football. Once again, you have the fruits of my copious efforts available. The Scholar’s Surreptitious Starters survey the top college fantasy football sleepers for Week 7 of the NCAA Football season.

In the summer of 2019, I identified Feleipe Franks as an undervalued CFF quarterback and targeted him in drafts. Unfortunately, he only played in three games for the Florida Gators after enduring a gruesome season-ending injury.

Afterward, Kyle Trask took command of the offense, and Franks decided to take his skills west to Arkansas…so far, so good. In three games, the redshirt senior has completed nearly 65% of his passes for 730 yards and a 7:2 TD:INT ratio.

How good of an athlete is the 6‘6” and 228-pound, dual-threat quarterback? The Boston Red Sox selected Franks in Round 31 of the MLB Amateur Draft in 2019. Yet, he chose to remain at Florida to call signals for the Gators. “I’m flattered that the Red Sox picked me this afternoon. However, I’m living out my dream being the quarterback of the Florida Gators. We’re all working extremely hard this offseason and I cannot wait to hit the field this fall,” Franks said following his selection (arkansasrazorbacks.com).

The Razorbacks were robbed of a victory against Auburn last week and have won only one game in 2020. Mississippi comes to town and provides the tonic for a second victory. The Rebels trot out a bottom-feeder defense in the SEC (and nation), and Franks easily exploits holes in the secondary. He is under-owned in CFF leagues and should exceed 25 fantasy points on Saturday.

Just before I finished my sleepers’ column, the Cincinnati-Tulsa game was postponed because of a COVID-19 outbreak on the Bearcats campus and quarantining of athletes. I have Cincinnati QB Desmond Ridder on a couple of teams and need to grab a replacement this weekend.

Temple finally opened its 2020 campaign last week against Navy. The Owls fell to the Midshipmen by two points, 31-29, and look to rebound against South Florida.

QB Anthony Russo made a grave blunder—red-zone interception—in the defeat and had a game-tying, two-point conversion batted down with 1:02 left on the clock. Despite the gaffes, Russo fashioned a fine fantasy afternoon with 206 passing yards, 20 rushing yards, and three total touchdowns, producing over 25 points.

“How he responded from that was completely different than he’s ever responded from a play like that. And that is an improvement. Before, if Russo made a critical error like that, you would see it affect him for the rest of the game or at least a certain amount of time. It did not this game. He came right back down and we got three touchdowns in the second half,” coach Rod Carey detailed after the game (inquirer.com).

A senior, Russo will not be shaken by one loss or a couple of slip-ups and will recover against a poor South Florida team at home. Vegas projects Temple to score over 30 points (and four touchdowns) against the Bulls. If you need a last-minute replacement at quarterback, Russo is a nice option and still available in the vast majority of leagues.

Who Ya Got at quarterback this week?

Living in the Northeast, surviving an unforgettable cold-weather game leaves a lifelong memory and an honors badge among football diehards. I can never forget the coldest football game that I attended (West Virginia at UConn) as a decade-long Huskies season ticket holder. On a windy and freezing Friday night, my friends and I sat on the upper deck as the cold chilled our bones. Luckily, UConn won 16-13, and it is one of my favorite games that I saw live.

Whenever Mountaineers grace my CFF columns, I harken back to that wonderful evening at the Rent in East Hartford, CT. West Virginia’s RB Leddie Brown makes my list of surreptitious sleepers this week.

Brown has surprised many fantasy owners over the first month of the season. He used the perceived lack of respect to fuel his passion and determination. “I’m taking everything personal this season. Nobody had faith in us coming into this season, so I’m here to prove them wrong,” Brown proclaimed in mid-September (thedaonline.com).

I placed Kansas in the Negative Zone on last week’s CFF: On Campus Podcast, and I doubt that the Jayhawks will escape this week on the road against the Mountaineers. Kansas’ run defense is atrocious, and Brown will find plenty of open holes in it. The West Virginia runner should be scooped up and started this week if he is available on the waiver wire still.

When chatting about relationships and love with my grandmother, she always expressed to me “out of sight, out of mind.” Of course, she fell in love with a sailor and got divorced. Sometimes, fantasy footballers embrace my grandma’s old-school creed when evaluating players.

“Everybody is really excited and happy to be back out here. We’re good. We’re rolling. It’s not like it’s fall camp or it’s the first game of the year. We have a bad taste in our mouth after the last game and we’re ready to change that,” defense end Jeremiah Littles asserted (msn.com).

Before the program’s timeout, Carlos Davis had jettisoned among the rising CFF runners in 2020. In the first three games of the year, the redshirt sophomore had earned 48 carries and gained 272 yards rushing while scoring once. During the last two games, his role as a pass catcher increased with six receptions for 70 yards.

Sharp CFF managers took notice of the improved production and work ethic by Davis. “I just kept being dedicated, kept chopping wood. Every day, I came out here and competed for the job,” Davis avowed (ai.com).

The Jaguars ball carrier remains available on far too many waiver wires, and he can provide a much-needed replacement this week against Texas State. Davis smashes the 100-yard barrier for the second consecutive game and reaches the end zone once.

Who Ya Got at running back this week?

“Kevin Harris is the pick here. He is BY FAR the best weapon on this team. He is certainly going to get his.” @aceholesrule

Over the summer, I selected Tim Jones in many drafts, anticipating a big season. Unfortunately, he has been injured and outperformed by his teammate Jason Brownlee, who leads the team in receiving yards (301) and touchdowns (3).

A deep threat, Brownlee posted back-to-back 100-yard outings without Jones on the field, averaging a whopping 31.4 yards per catch. The junior has hit two grand slams, scoring on touchdown receptions of 88 and 68 yards.

A JUCO transfer, Brownlee, 6’3” and 195-pounds, played two seasons at East Mississippi Community College. In 2019, he was named NJCAA First Team All-American honors after leading the country with 75 catches for 1,055 yards and 12 touchdowns. He logged five 100-yard games and reached the end zone in all nine regular-season games.

“With Brownlee, he understands the game more this year and yes, he’s an SEC guy without a doubt. It’s just going to depend on if he has a good year, where he’ll land, and how many SEC offers he’s going to have,” EMCC coach Buddy Stephens said in the summer of 2019 (cdispatch.com).

It is clear that Brownlee is living up to coach Stephens’ lofty praise. Jones is still listed as day-to-day and might not play against the Miners. There is no reason to allow the former JUCO star to remain a free agent, and Brownlee should be acquired before kickoff this weekend.

The first factoid that CFF managers notice in regard to Billy Kemp is that he is listed as a running back. Yet, he starts are wide receiver for the Cavaliers. Kemp is also listed among receivers for targets in many college football databases in 2020. Regardless, the junior playmaker is criminally underutilized by CFF diehards.

Do not be cavalier…Before you even finish the profile, go pluck him off the waiver wire immediately and finish reading afterwards.

Glad to see you back, and I hope Kemp is now on your team. In three games, the Cavaliers’ speedster is one of the most heavily targeted players in the nation. He is tied for tenth with 40 targets and average 13.3 passes each game…Bazinga!

At 5’9” and 170-pounds, Kemp lines up in the slot and is electric with the ball in his hands. He has corralled 27 passes for 248 yards and a touchdown. “He’s in and out of his cuts very quickly. You just gotta really pay attention to what he’s doing. He’s a very dynamic player, arguably our best route runner, and it’s hard to cover him. As you can see, so far throughout the season, not too many people have covered him, and that’s what he brings to the team. He’s quick, he’s in and out of his breaks and he has quick hands,” teammate and cornerback De’Vante Cross stated (dailyprogress.com).

In full-point ppr. leagues, Kemp is even a more valuable asset on rosters. It is unreasonable and nonsensical to allow an opponent to add the Virginia wide out to their stable of playmakers. Also, the upcoming contest against Wake Forest provides an enticing matchup for another productive outing.

Who Ya Got at wide receiver this week?

“May the Schwartz be with you.” @realRYNOS