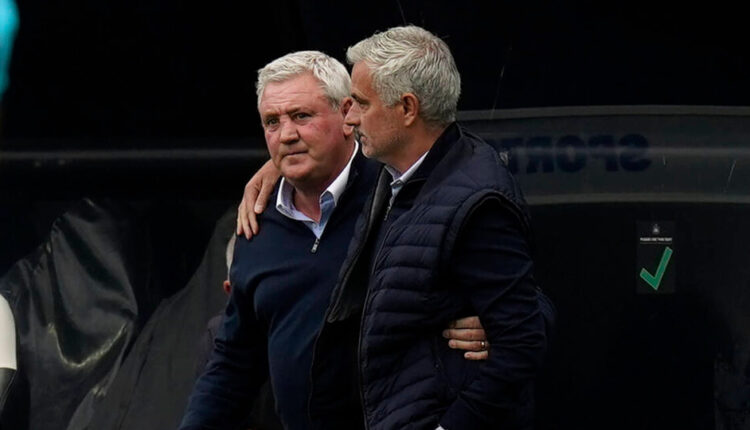 Yes, yes, we know: we are too good to you people here at Fantrax! Not only do we give you the wise words of the Kickaround Pod, the astute analysis of Genie’s Waivers, the informed insights of the Chaps Sleepers XI, and the must-read musings of Totti’s Starts and Sits, but NOW we are providing you a preview of your very own personal league. Okay, enough of the alliteration. Hopefully, you know the score: on Monday we gave you the opportunity to win a written preview of your league’s matchups, and you got back to us admirably. We chose Andres Posada as our Community Special winner this time, so here is that preview…

P.S. Even if this isn’t your league there should still be some useful tips for gameweek 5!! 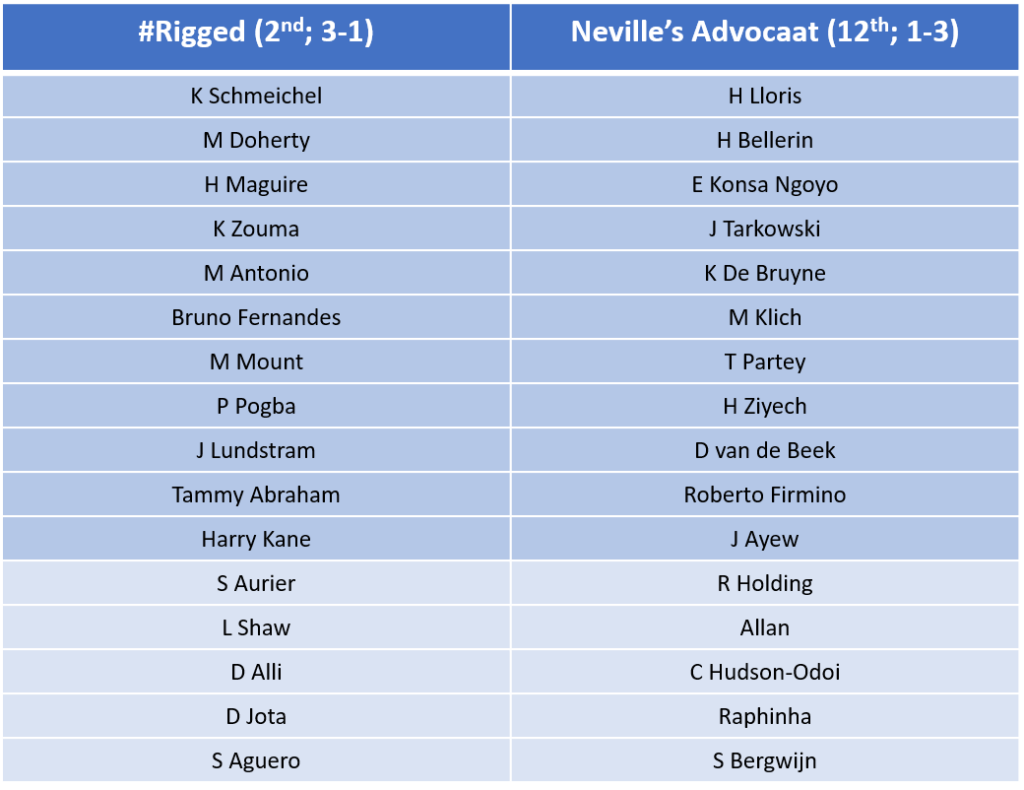 Let’s start with the blowout of the weekend (though in fairness, I don’t foresee any really close matchups). Rigged’s squad is absolutely Graham Stacked (yeah, that’s right, I made a reference to a noughties Arsenal 4th string goalkeeper). It’s so loaded I’m beginning to see how the team name has come about. Playing the handcuff strategy with Doherty/Aurier is a genius move, and with West Ham up next (admittedly not as enticing a fixture as it used to be from a fantasy perspective), whoever plays should get some good points. Maguire’s season so far seems to be going as well as everyone else’s 2020, but I think the fantasy community is underplaying his value – Slabhead could do nicely against Newcastle. The midfield consists of Bruno Fernandes (COVID-permitting), and the forward line has the current top points scorer in Harry Kane. Oh, and the bench has a soon-to-be-returning Sergio Aguero…announce the champion now.

Neville’s Advocaat…. like the name, don’t like the team. In fact, “don’t like” is kind when looking at the defense. Tarkowski is good, but his points this weekend might just be able to bring the defense back to par if Bellerin and Konsa get negative points – which wouldn’t be surprising at all. The midfield is only marginally better. It’s basically KDB. Now, the City star may be the “fantasy GOAT” (Twitter, discuss…), but he can’t carry two defensive mids (Partey and Allan), a Chelsea winger hopefully making his first start in 7 months (Ziyech), and a United man who’s hit the ground crawling since his arrival (van de Beek). Thankfully, they have Firmino and Ayew up top. Oh… 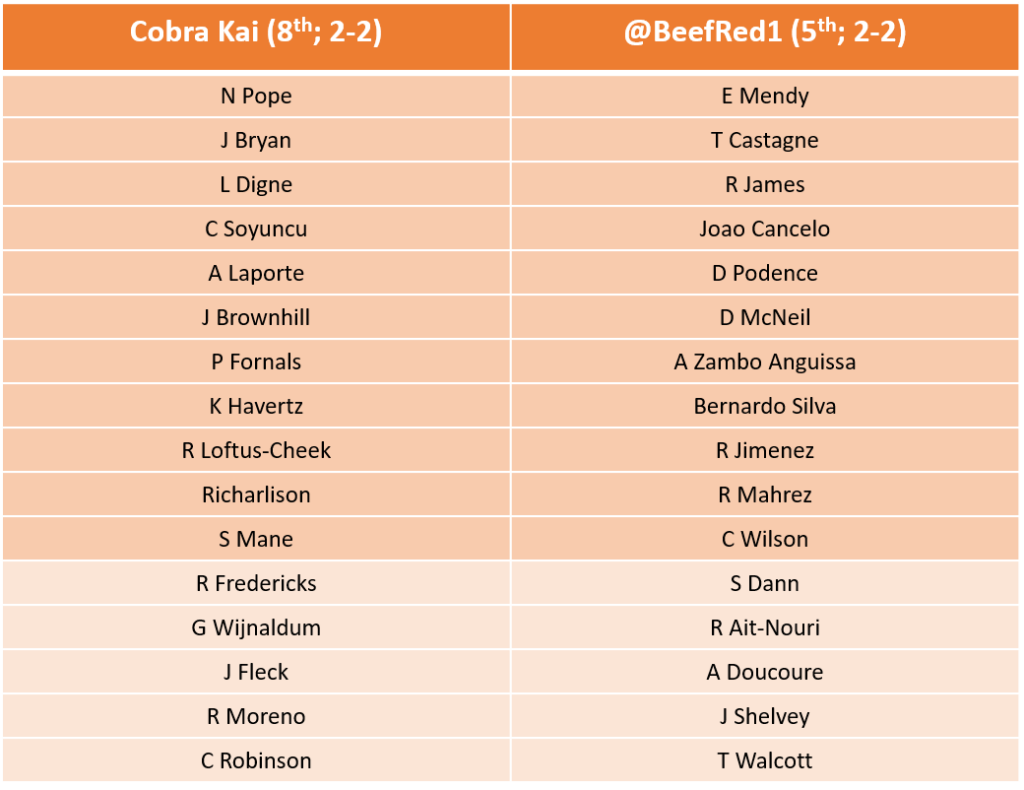 A great reminder that I need to start watching Cobra Kai on Netflix. It’s on my watch list after I’ve finished Arrested Development. Yes, I know, I’m late to that party, but before that it was The Office (American version of course), then there was Peep Show. It’s hard to fit it all in, even during lockdown. Anyway, where were we? Oh yeah, Cobra Kai loses this week, but at least they can field a team. At one point pre-international break, it looked like none of the forwards would be fit! Having said that, Richarlison (and Digne) vs Liverpool, with Mane vs Everton, isn’t ideal when the Merseyside derby ends in a low-scoring stalemate. What’s worse is that outside of these three there’s only really Kai Havertz that is undroppable. Bryan, Brownhill, Fornals, the whole of the subs bench…this is free-agent fodder I’m afraid. I like the gamble on Loftus-Cheek, but let’s not get carried away and assume the loan will work wonders. He could just end up being another (albeit older) Dominic Solanke/Izzy Brown/Christian Atsu/Insert-other-Chelsea-loan-player-here.

Speaking of Chelsea, Mendy is a major doubt for BeefRed, but having the goalkeeper position as your biggest issue heading into a matchup is like having a kicker as your biggest issue heading into a matchup. Play anyone. Hell, playing nobody would probably be the safest bet to ensure victory against the under-par Cobra. I like the defense for BeefRed; Castagne, James, Cancelo (I think he starts for City now), and soon, Ait-Nouri is a nice contingent built on the solid logic that center-backs suck. The midfield has ghost points galore (again, I think Bilva comes back in…quick tangent, it’s only just occurred to me that we can now stop calling him Bilva), but Podence has become a rotation-risk, which will be a concern – particularly as Wolves are last up this gameweek. Jimenez is going to score against Leeds though, so even if it’s not Podence setting him up, it’ll be enough points to give BeefRed the victory.

FF92 vs A Team of Carraghers 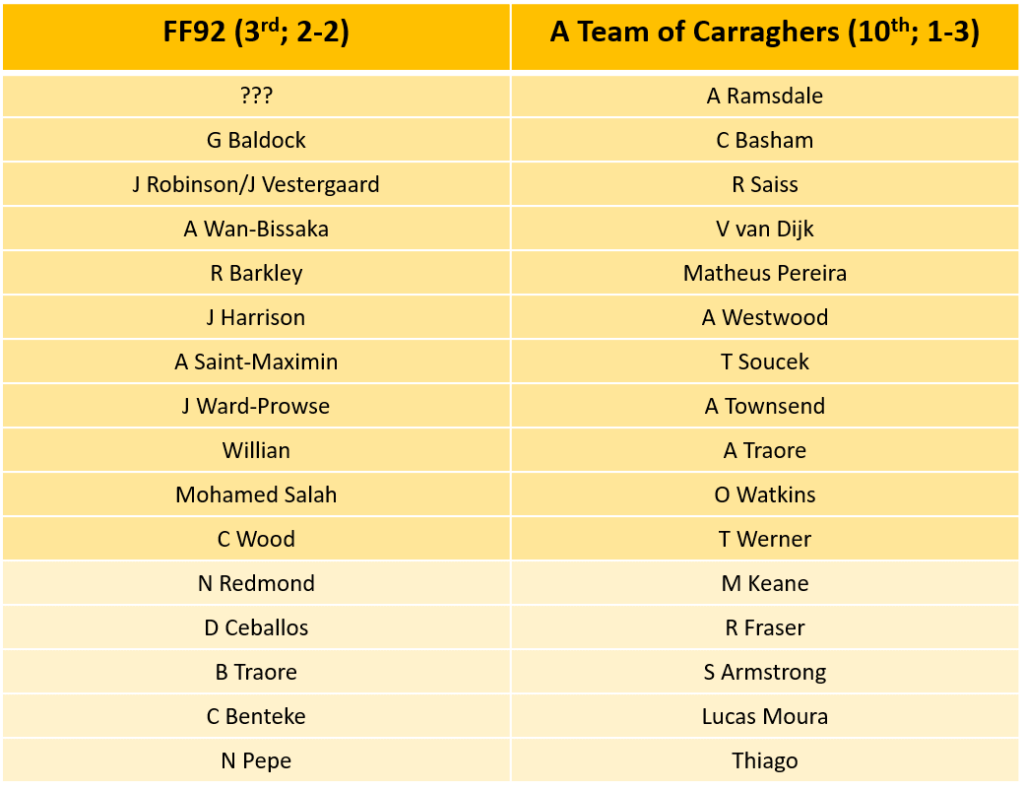 You know that look of fear, disgust, and confusion you get whenever Gareth Southgate announces the England lineup? That’s what it must be like for FF92 looking at some of their matchups this week. That’s not a dig at the team though; it’s decent, especially in midfield. But wow, the fixture list hasn’t been kind. Salah at Everton, Willian at City, JWP at Chelsea, Barkley against Leicester, Saint-Max against United (okay, so that one might not be too bad right now)… it’s not cool. And that’s the best possible selection – those on the bench face the same fixtures (if they even play). What’s more, it looks like they’re trying the “any defenders vs Fulham” strategy, which looks to be an excellent choice, except it just so happens that their opponents have also adopted the same strategy. Talk about kicking a team when they’re down.

Carraghers, by contrast, have a very nice weekend of matchups and should win this week on the back of it. Big names Werner and Traore are up against decent opponents in Southampton and Leeds, but I have a feeling that both could have their breakout games for the season. Then there’s the midfield trio of Westwood, Pereira, and Townsend, who wouldn’t normally scare you, but with matches against West Brom, Burnley, and Brighton, respectively, could easily put up 40 points between them. These two squads are pretty even in quality, but the fixtures have fallen kindly for Carragher, and by Tuesday morning, the current 10th placed team should have the same record as the current 3rd placed team. Now that’s a tight league. 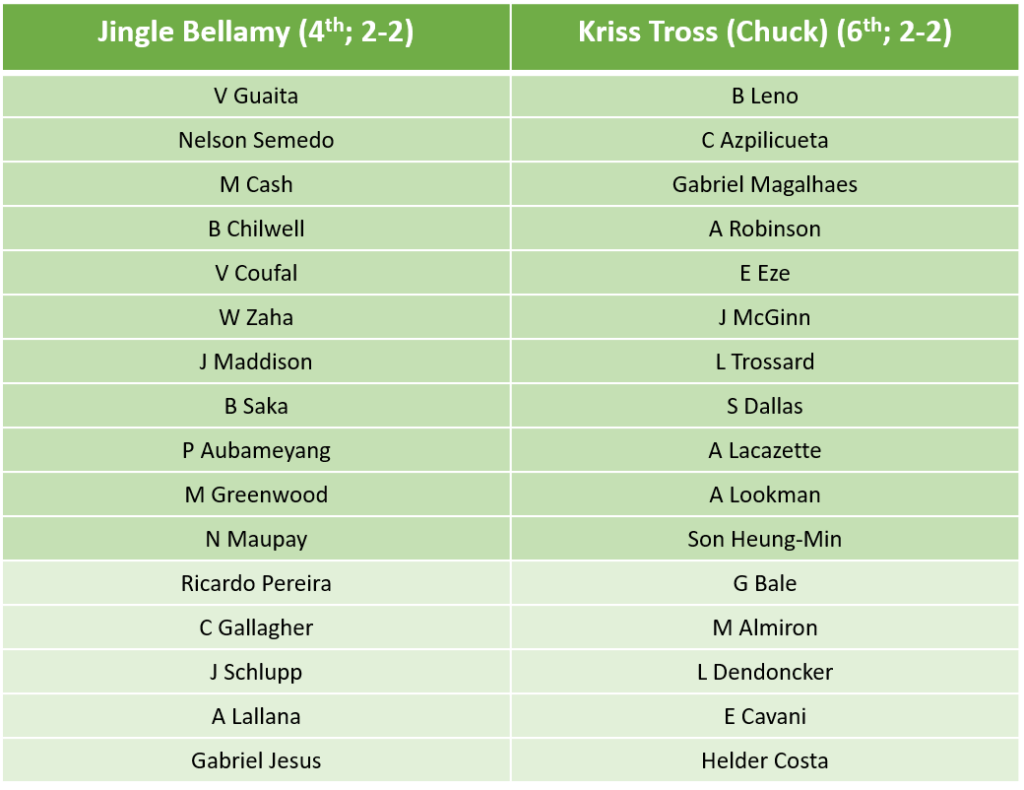 So many Desmond 2-2 teams in this league, and here’s a battle between two of them. It might be the game of the weekend, with both scoring above average, and Kriss Tross perhaps feeling aggrieved at losing with a decent score. Chilwell’s injury is a big concern for Jingle; likewise Auba. If neither of these gets passed fit, this one could get interesting, particularly as the bench is full of players also unlikely to start. A dip into free agency might be required. Maddison (vs Villa), Zaha (vs Brighton), and Greenwood (vs Newcastle) should lead this team to a very good score though.

Chuck’s gone for the “5-year-olds-in-the-playground” approach to team management, with minimal f***s given in defense, and an overload of options going forward. I disregard defenders in fantasy as much as the next astute manager, but this might be taking it one step too far. Azpi appears to be a backup fullback at Chelsea now (as an Azpi owner myself, this hurts me to admit it), whilst Antonee Robinson has only played 90 minutes. Having an Arsenal center-back as your most reliable defender says a lot about your fantasy squad (and also where Arsenal are now as a team). But as weak as the defense is, the midfield and forwards more than make up for it. If Bale and Cavani live up to former reputations, this team gets scary (and perhaps Rigged has a challenger). The midfield has under-the-radar points scorers in abundance. With Zaha, Maupay, Eze, and Trossard, Crystal Palace versus Brighton is must-viewing for these two…there’s a sentence I never thought I’d write. 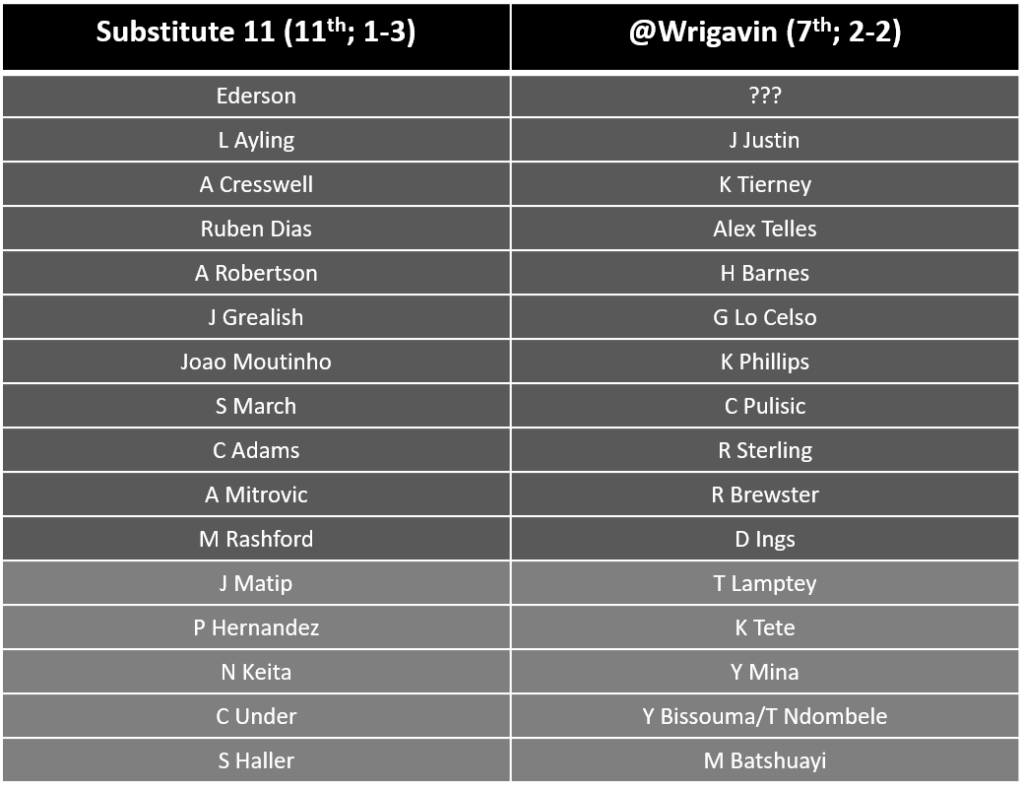 Who is the first-round pick in Sub’s squad? I’m thinking they’ve either been traded out, or they had the 12th and 13th picks and maybe went Rashford-Grealish? Anyway, what I’m saying is that this team lacks star power. It’s deep though, and if Hernandez and Under become regular starters, then the manager will have nice selection problems going forward. This week could be a struggle though, with Grealish away at Leicester, Robertson away at Everton, and Che Adams away at Chelsea. The big question for Sub is whether to risk leaving Under in the team, but with Leicester-Villa not until late on Sunday, that won’t leave many options if he doesn’t make the starting 11. Playing it safe means probably opting for Solly March or Aaron Cresswell… decisions that could make the difference in this one.

Injury doubts seem to be the theme of the week – and will probably be the theme of the season – but nobody has bigger issues than Wrig has in defense. James Justin plays. But Tierney may be self-isolating, Telles, as a new signing, may not start (though I think he will), and Lamptey, Tete, and Mina are all major injury concerns. If Sterling (slight injury concern) and Brewster don’t start, then Wrig will struggle to field 11, and this prediction gets flipped on its head. If ever there was a need to be at your phone when the lineups get announced, this weekend is it – free agency pickups are going to get chaotic. One ray of sunshine is that the midfield four have good matchups, to the extent where I’d perhaps be disappointed if they didn’t score 50 points between them. I’m gambling that some of the injury doubts don’t come to fruition, and the midfield and forwards bring this one home for Wrig. 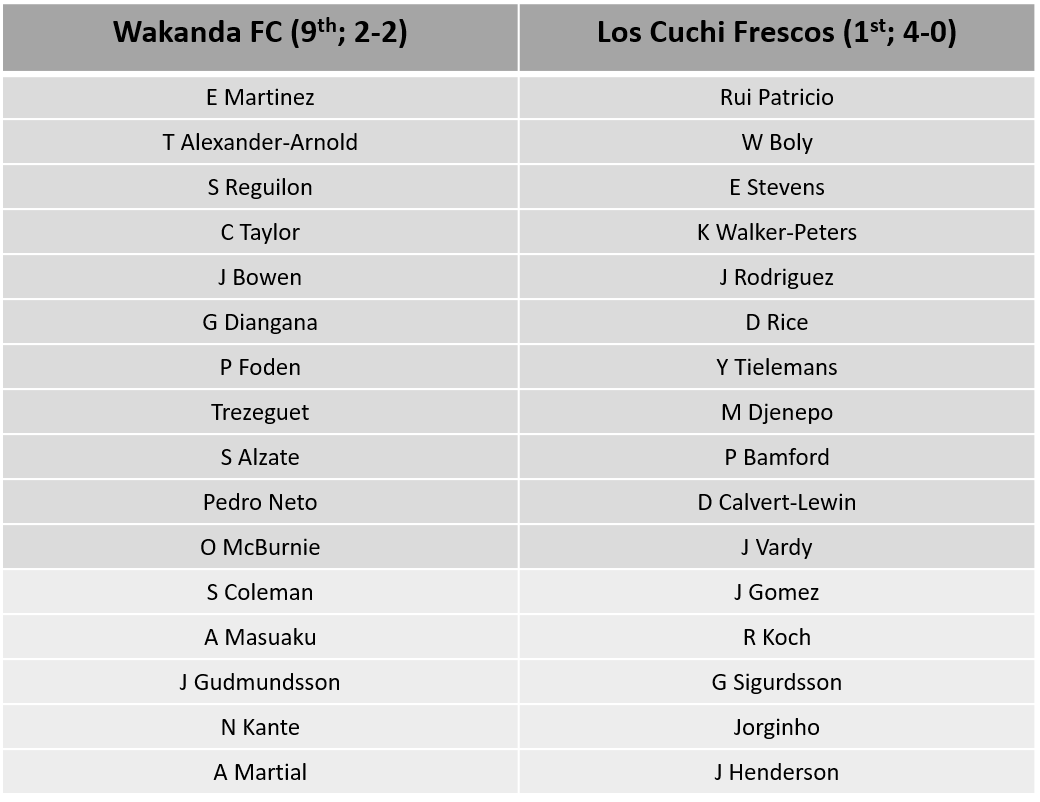 Wakanda forever. Or at least, for gameweek 5, as they will pick up a win to go 3-2. This is one of the few teams where the defense is a strength. Reguilon is going to be a top 10 player in the position, TAA is still elite, Taylor will show against the baggies why he’s one of the most undervalued defenders in fantasy, and Coleman and Masuaku are options that will probably stay on the bench this weekend, but who would get into most of the other teams in this league. This may be the least fashionable squad going – seriously, where are the big names?! – but it doesn’t matter if they pick up points. A big tipping point in this matchup will be whether Neto and McBurnie start…I have a feeling both do, which would be ideal for Wakanda given that they take on the Leeds and Fulham defences, respectively. Dropping Gudmundsson for a Leeds/Wolves player would be a wise move, just in case Neto doesn’t start on Monday night.

The only unbeaten side in the league will see their run end this weekend as they crash to a heavy defeat. Rodriguez, DCL, and Vardy have presumably carried this team to win after win, but the first two take on Liverpool, who you know will want to bounce back after the mighty Aston Villa hammered 7 completely non-deflected and well-deserved goals past them. I’d be tempted to trade DCL if I were Loc Cuchi. I think the England forward has an excellent season, but this squad is not without its holes and could do with some help. In fact, this squad is…not great. Without changes, Los Cuchi are going to fade sharper than Tommy Shelby’s hair.