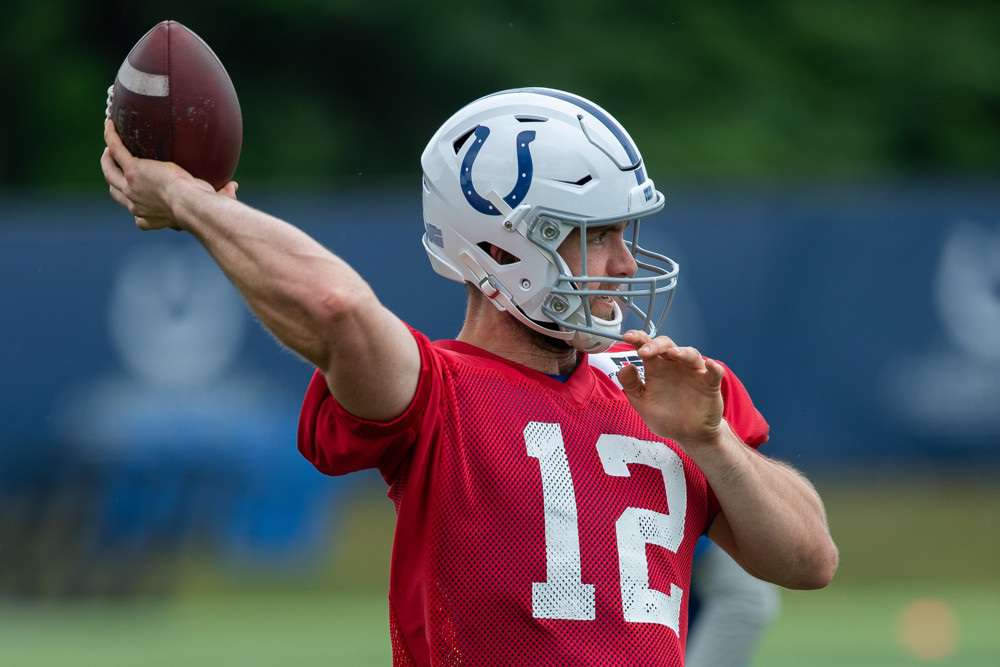 Week 5 is in the books and it is time to turn the page to Week 6. With the New Orleans Saints and Detroit Lions on byes this week, two of the more popular fantasy quarterbacks in Drew Brees and Matthew Stafford are off the board as well. Those who have Brees, in particular, will likely have to find a sleeper to plug and play this week. Owners who have Stafford rostered likely have a second option in the fold. No matter your particular circumstances, it helps to identify sleepers who could break out due to a favorable matchup. Here are some of my favorite Week 6 quarterback sleepers.

Andrew Luck is not your typical sleeper, but he is being considered a Week 6 QB2 by most analysts. I think that is far too low. Volume is king in Fantasy Football, and Luck illustrates that more than perhaps any player in the league. Luck enters Week 6 as a top-12 year-to-date fantasy quarterback despite throwing for just 6.09 yards per attempt. That number is the lowest among all NFL quarterbacks who have thrown at least 100 passes. Luck’s fantasy numbers have been buoyed by incredible volume. He has thrown the ball 121 times over the last two weeks and has posted a top-five finish in each of those games. Luck should be in for another high-volume game this week when he leads the Colts to face the New York Jets.

Indianapolis has not been able to find an answer in the running game this season. The Colts have rushed for just 74.4 yards per game this season, fourth-worst in the NFL. That does not figure to change much against the Jets. New York has been an average rushing defense to this point, but Indianapolis does not really have the personnel to take advantage. The Colts are much better off leaving the ball in Luck’s hands and letting him find the open receiver. The Jets have had issues at times defending the pass. They have allowed three 300-yard passers so far, and I fully expect Andrew Luck to become the fourth. Due if nothing else to sheer volume, Andrew Luck will be a top-ten fantasy option once again in Week 6.

Jameis Winston is still available in a ton of leagues because of his season-opening three-game suspension and Ryan Fitzpatrick’s outstanding performance in Winston’s absence. But Fitzpatrick predictably fizzled out and Winston is back in the saddle for the Tampa Bay Buccaneers. The former No. 1 pick will earn his first start of 2018 in a Week 6 road trip to Atlanta.

Atlanta’s defense has been gutted by injuries, and they have been exposed in pass defense as a result. The Falcons have allowed four consecutive quarterbacks to throw for three touchdowns against them. Tampa’s defense has not been any better, and this game has a massive 58-point Vegas total in what should be a shootout in the friendly confines of Mercedes-Benz Stadium. The Buccaneers were an aggressive, vertical pass offense with Fitzpatrick at the helm, and I believe that attacking style will continue with Winston now back in the fold. Jameis Winston should be a top-ten fantasy quarterback this week and makes for an ideal candidate for those seeking Week 6 quarterback sleepers and streamers.

The Pittsburgh Steelers finally put forth a good defensive effort in last week’s win against the Falcons. Pittsburgh had six sacks and Matt Ryan was under constant pressure. The Steelers will look to build on that this week in Cincinnati. However, I believe they will have less success against Cincinnati. The Bengals boast an excellent offensive line and are one of the leaders in adjusted sack rate. This should benefit Andy Dalton’s fantasy stock this week.

Dalton ranks a very serviceable 13th among quarterbacks in fantasy points heading into Week 6. Dalton currently has more fantasy points than Tom Brady and Cam Newton. While I do not expect that to hold throughout the season, Dalton has proven he can put up numbers. Last week was the only week in which he failed to throw for multiple touchdowns, and he averages a very healthy 289 passing yards per game through five weeks. Andy Dalton should have enough time in the pocket to exploit Pittsburgh’s leaky secondary. I have him right on the fringe of QB1 territory this week.

My friends, this is the point in the show where fantasy and reality go in two very different directions. By no means is C.J. Beathard a good NFL quarterback. He struggled last week as San Francisco lost to a previously 0-4 Arizona Cardinals team. Beathard took four sacks and turned the ball over four times in the loss. However, he did account for 356 yards of total offense and three touchdowns. This led to Beathard posting a top-ten fantasy performance in Week 5. I believe Beathard has the potential for another nice fantasy day when he heads into Green Bay on Monday night to face the Packers.

Green Bay should be able to control the action throughout this game as long as Mason Crosby can remember how to kick. San Francisco will likely be without leading rusher Matt Breida, leaving the plodding Alfred Morris as their primary running back. The 49ers figure to spend plenty of time in catchup mode and having to throw the football. The Packers are also fifth in the league in sacks and the 49ers struggle to protect their quarterbacks. Beathard does have the ability to escape the pocket and make plays with his legs. He has four career rushing touchdowns in what amounts to about half a season’s worth of playing time. It will not be pretty, but C.J. Beathard has the potential to finish as a QB1 this week due to his scrambling ability and likely negative game script. This makes him an under-the-radar Week 6 quarterback sleeper.