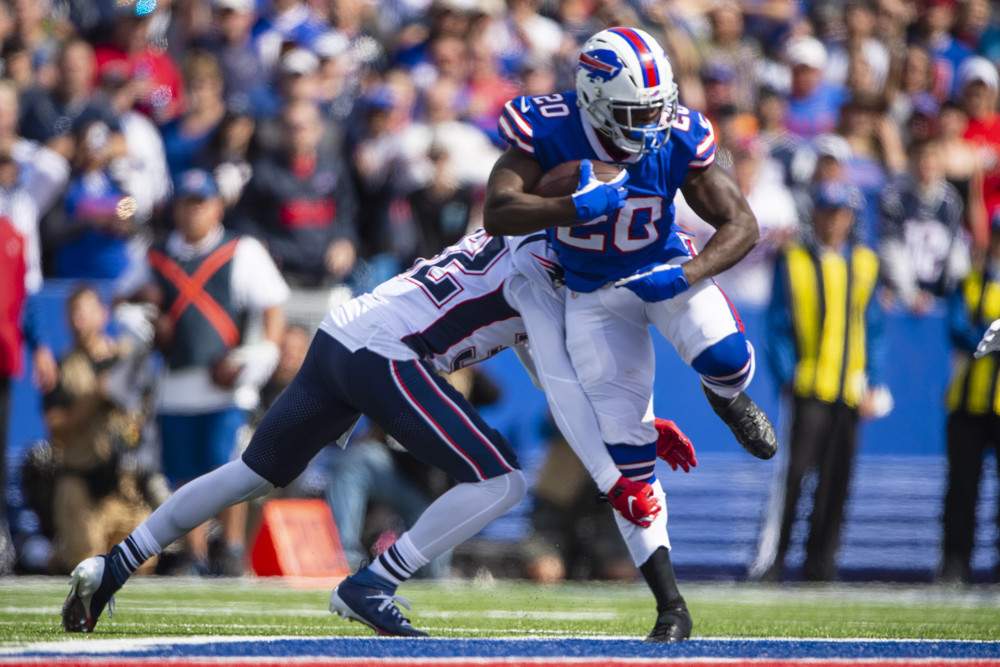 Last week’s article was full of gems like Wayne Gallman and Will Dissly, but this week is a little different. This is undoubtedly the worst crop of waiver wire players we’ve had all season long. I’d actually stray away from using any FAAB or any high waiver claims for Week 5 and save it for another big injury. With that said, there are still plenty of good options available and there are surely owners who need some roster spots filled with bye weeks approaching quickly. With that in mind, let’s get into our Week 5 waiver wire article!

If your league uses a FAAB system you probably want to head on over and check out Scott Engel’s Week 5 FAAB Guide.

I’d be lying to you if I said I was excited about Jones. This committee has been frustrating to figure out all season but Jones has clearly established himself as the better back. That’s clear when you see that Jones has 234 rushing yards on 50 carries this season while Peyton Barber has 182 rushing yards on 52 carries. That’s 4.7 YPC vs. 3.4. That doesn’t even take into consideration that Jones has an additional 71 receiving yards to Barber’s 26.

Bruce Arians has talked about using the “hot hand” approach and he’s done just that. Jones actually has at least 13 carries for 70 yards or more in three of the first four games while Barber has only surpassed 50 rushing yards once, despite getting more carries. What I would do is stash Jones on my bench and just hope that he emerges as the go-to guy, making him a viable fantasy option in the second half.

Tate was actually in my article last week but now’s the time to pick him up before he’s universally owned. We’re talking about a guy who regularly finished as a Top-30 receiver joining an offense where he may be the number-one option. The reason for that is because Saquon Barkley is injured and this WR core is crap. Sterling Shepard is solid but Tate is definitely the better player. That’s evident when you see that he has at least 90 receptions in four of his last five seasons, averaging 89 catches per year in that span. That’s amazing production in a PPR league and he should benefit from Daniel Jones taking over at QB as well.

This dude has literally been playing professional football since I was in middle school. How crazy is that? That makes him one of my favorite players in the game and it’s truly incredible that he’s still performing with so many years under his belt. That’s also one of the reasons why he’s so widely-owned because fantasy owners simply don’t trust a 36-year-old running back. That’s a silly notion from a guy who’s producing though, with Gore rushing for at least 68 yards in three-straight games.

He actually now ranks 12th in the NFL with 61 carries while ranking 11th with 263 rushing yards. How often do you see a guy who’s Top-12 in both carries and rushing yards this widely available? He’s also handling almost all of the goal-line carries and we’re certainly not worried about health for a guy who’s only missed three games since 2011. Stop disrespecting Gore!

We’re going to keep this one very simple. Herndon is coming off suspension this week and there’s some belief in the fantasy community that he could be a Top-10 TE. Having that potential makes him a great speculative add, as he should also benefit with Sam Darnold returning shortly too. The rookie numbers aren’t going to jump off the page but the fact that he had 502 receiving yards and four TDs in his rookie campaign indicates that he should improve in his sophomore season. Those numbers made him the TE16 last year and the position may be even weaker this season. The advanced stats are truly amazing as well, with Herndon ranked Top-10 among tight ends in yards per reception, yards per target, true catch rate, red-zone receptions, and deep targets last season.

There’s got to be some gold mining going down in Miami. While you have to dig through 40 feet of dolphin crap to find it, it’s possible that Williams is that diamond in the rough. What makes him enticing is the fact that he’s apparently their go-to receiver. That’s clear when you see that he’s tied with DeVante Parker for snaps over the last two weeks, playing about 90 percent of the team’s snaps. More importantly, he’s got 30 targets across the first four games, which is easily the highest total on the team. Getting the most targeted player on the worst team in football is a recipe for fantasy success, as this team should be one of the league leaders in pass attempts by the end of the year.

This is one of the sneakiest adds for Week 5. While I don’t anticipate Hines getting a ton of carries, he’s a sneaky bet for double-digit targets in a matchup with the Chiefs. The reason for that is because he’s the go-to passing back for the Colts. Having that role in a situation like this is a recipe for success, with Indy facing the Chiefs as an 11-point underdog in a game with a total of 57. That means they’ll be throwing all game and playing catch-up throughout.

That alone is big for Hines but this offense is also dealing with injuries from T.Y. Hilton and Marlon Mack. That’s more than 50 percent of the team’s touches out the door and Hines could be looking at a massive workload with so much in his favor. Getting six receptions in Week 4 showed that they want him as the third-down back and it seems likely that he’ll play a lot more than just third downs here.

A.J. Brown (TEN): Brown has had two monster games but having Marcus Mariota at QB limits his upside, especially as a rookie who’s only seeing limited target share.

Cortland Sutton (DEN): Sutton is available in about 40 percent of leagues, which is bizarre for a player with 22 receptions for 309 receiving yards.

Robby Anderson (NYJ): Anderson has been dropped in a handful of my leagues because of the Jets struggles but let’s give him a second chance with Darnold returning shortly. Same with Jamison Crowder.

Deebo Samuel (SF): Samuel has led San Fran’s WR core early on and could develop into their go-to guy the more he grows into this offense.

If you’re waiting for D/ST streamers, those will be posted on Wednesday or Thursday.