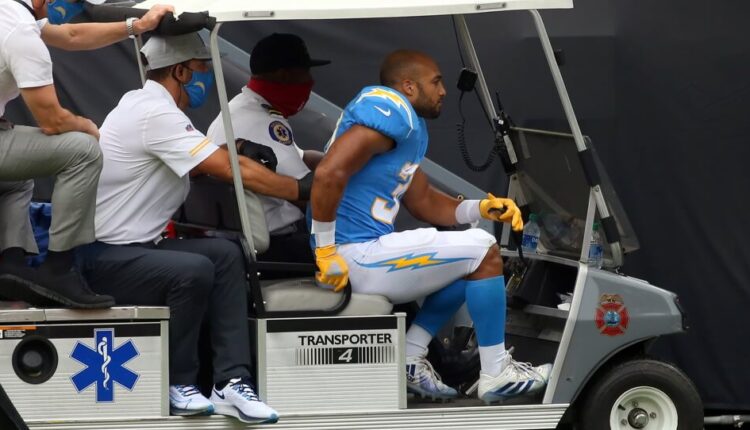 This article is meant for those who need to win a matchup in deeper leagues, and may have depth issues. You will notice a lot of handcuffs and speculative pickups, but sometimes that can win you a league. The point is to add these guys early if you have room on your bench in order to beat the crowd and avoid the waiver period.

This one is another speculative add for sure, but we know that Austin Ekeler was playing through an ankle injury on Thursday night, albeit he was productive in his limited work. However, interestingly we got some insight on something else having to do with the Chargers backfield. Justin Jackson looks to have established himself as the #2 RB in Los Angeles. So why do we care about this from a fantasy perspective? Well because in Week 15 with Austin Ekeler managing his injury, Jackson out-touched him 13-12. But here is the thing, because the Chargers played on Thursday Night will mean that Ekeler will have a few extra days of rest. But in the case that he re-aggravates the injury, Justin Jackson would be in line for a smash spot against a Texans defense that Rashaad Penny just torched for 137 yards on the ground in Week 14.

There is a new coaching regime, and most logical coaches would give James Robinson an uptick in his workload. However, if for some reason James Robinson is forced to miss Week 16, the matchup here is excellent for Hyde. The Jaguars and Jets will face off in what might be one of the least interesting contests all year as these two teams sit at a combined record of 5-21. But for fantasy purposes, the matchup for a running back is one to promote salivation. The Jets rank 30th in the league in rushing yards allowed this season.

Listen, this is a total roll of the dice here, but the Chargers have a run funnel defense. If both of them end up playing, they will cap the ceiling of one another, but if for some reason one of them were forced to miss Week 16, the starting running back would have some sneaky value in deeper leagues. Again, I want to stress that this is not something you should feel totally confident in, but if you are in a pinch this could be a decent option. The Chargers rank 29th in rushing yards per game allowed with 136.8 YPG.

The last and final running back handcuff to consider picking up is Mike Davis. We know that Davis is never going to have an extremely high ceiling, and I know you may be tired of hearing this, but if Cordarelle Patterson were to miss Week 16, Davis is the next man up in a juicy matchup with the Detroit Lions. The Lions rank 28th in the league in rushing yards per game allowed with 135.2. They also allow 1.2 rushing touchdowns per game which is where Davis has the chance of doing the most damage.

The Saints are having a rough year to say the least. They have been riddled with injuries, and there is a clear hole at the WR position with Michael Thomas out for the season. Although the production from Callaway, Harris, and Smith has been decent thus far, there has not been a clear-cut WR1 to step up on their roster up to this point. However, the past is the past, and we need to focus solely on Week 16 if you are still alive in your league. New Orleans is walking into a fantastic matchup for pass-catchers, as the Dolphins rank 28th in passing yards allowed this season. There are going to be targets for both of these guys in Week 16, I prefer Callaway to Smith by a long shot, but there is a chance, especially in deeper leagues where both of these WRs are productive.

I am not completely sure how we got here with Allen Robinson II, as he was a third or fourth-rounder in terms of ADP, but has yet to score double-digits in a single week in half-point PPR leagues. He has spent a lot of time injured over the past few weeks, only to return in Week 14 and put up another underwhelming performance. However, in Week 16 they are due for a matchup against a Seattle Seahawks defense that ranks dead last in passing yard per game allowed, and it is not all that close. If he is healthy and able to play, he might be worth a shot if you are someone that is very thin at the wide receiver position. But this does come with a large amount of risk.

I know, these options aren’t sexy but at the end of the day, when you are in a playoff push, it is important to take it one week at the time, and when making streams, the matchup is crucial. The Buccaneers are elite against the run, and so the only real way to beat them is through the air.