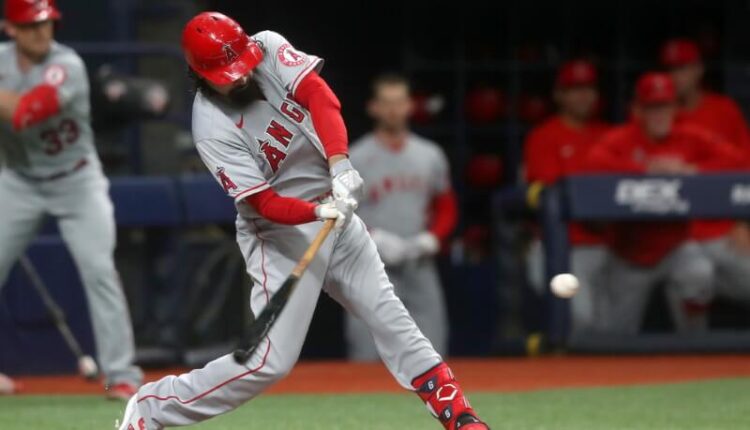 When it comes to the optimal launch angle/trajectory of contact, the consensus is that a line drive is the best type of contact a hitter can make. Last season, the league had a weighted-on-base-average (wOBA) of .650 on line drives. On ground balls, that number goes down to .221. Fly balls are better with a .457 wOBA, but come with a much worse batting average (.281 vs .637).

So, just hit line drives, right? If only it were that easy. Although line drives are the perfect form of contact, it is also very hard to hit them consistently. According to my research, only 20.4% of a hitter’s line drive rate can be explained by their line drive rate from the season before. That’s a lower correlation than batting average on balls in play (BABIP) on a year-to-year basis, for context.

If we can identify players who had an uncharacteristically low line drive rate last year, then we can find players who are likely to hit for a higher batting average than they did last year. This also means a higher on-base percentage, which means more opportunities to score runs and drive batters in. Thus, the impact is greater than you might imagine.

The table at the bottom of the page lists every player with at least 150 plate appearances last year that is likely to have a higher line drive rate in 2022. By average the players’ line drive rates in previous seasons (including 2021), and then comparing it to 2021, we can identify which players should have better days ahead in 2022. In fact, here they are:

Who Is Going To Hit More Line Drives?

It was a difficult season for Joey Gallo from the batting average department, as he hit under .200 (.199). Some of that is due to his .246 BABIP, but his career .264 BABIP isn’t significantly higher. That being said, Gallo made more contact last season with a career-low 14.7% swinging-strike rate, while he also pulled the ball (43%) less. Thus, with a line drive rate higher than the 15.7%  he had last year (career 21.6%), he can actually compete for the highest batting average he’s posted in a full season. I’d definitely recommend buying low on him heading into 2022.

Freddie Freeman had no struggles in the batting average (.300) department last season. That being said, his 15.4% strikeout rate, a career-low in a full season, can explain a lot of that; his .321 BABIP was lower than his career .339 BABIP. With his line drive rate likely to get back over 30% in 2022, Freeman remains someone who can provide you with a lot of batting average, and overall tremendous production in all offensive categories. I’d consider him to have one of the highest floors of any player.

After being worth less than one win above replacement (fWAR) and posting just a 100 weighted-runs-created-plus (wRC+), lower than his career 114 wRC+, it’s unlikely Corey Dickerson is a full-time player in 2022. If a rebuilding team gives him a shot, though, he’s worth a late-round flyer. For someone who posted line drive rates over 30% in both 2018 and 2019, Dickerson’s 22.7% line drive rate was rather low. This led to a career-high 49.4% ground ball rate; hence, the lack of offensive success. Keep a close eye as to where Dickerson signs in 2022- he could be in line for a bounce-back season.

As you can see, the Yankees as a whole underachieved last season. One of them? Luke Voit, whose struggles and injuries led to the team trading for Anthony Rizzo. After posting a career-low .239 batting average, expect a higher number with positive regression from his 19.4% line drive rate. Since those line drives turned into a career-high 34.5% fly-ball rate, this didn’t negatively affect him as much as some of the others on this list. That being said, indicators like this are why the Yankees should have full confidence in Voit as their first baseman in 2022.

Even before missing most of the season due to a hip injury, Anthony Rendon was one of the major disappointments in 2021. For someone being paid $35 million a year, his 95 wRC+ was not expected- he was worse than the average hitter. The injury likely played a great role here, as did his career-low 22.5% line-drive rate; he hit just .240 with a career-low .267 BABIP. With more line drives in 2022, here’s hoping that Rendon is off and running to help the Angels compete for a playoff spot. He’s a very interesting buy-low at the third base position in fantasy drafts.

To be honest, Ian Happ was the inspiration behind this study. During the season, it was clear his BABIP was being affected by a low line drive rate, and, as expected, that all changed for the better during the second half of the season: 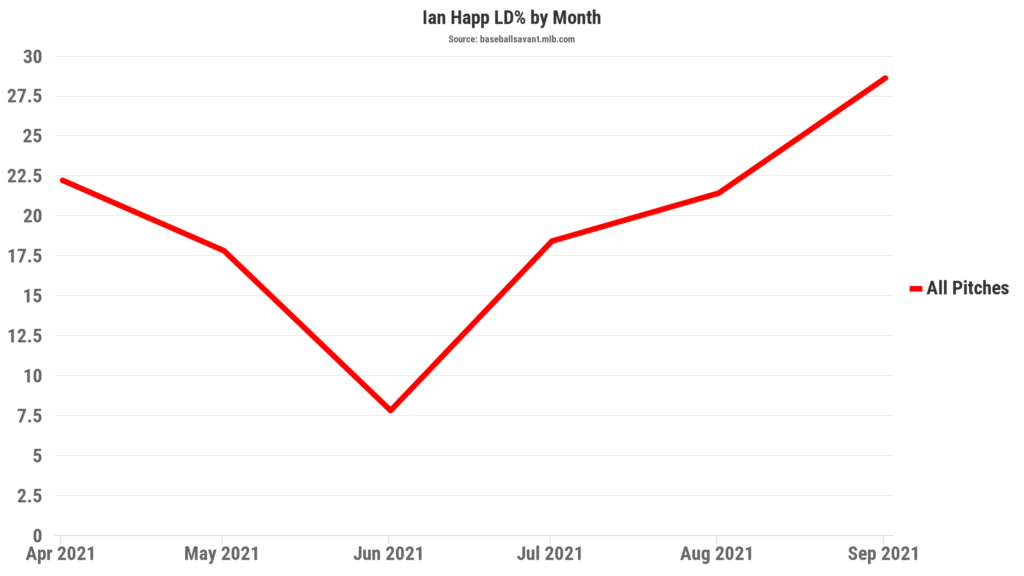 Even then, Happ’s 20.2% line-drive rate was still lower than his career 24.2% mark. As he demonstrated in the second half, he’s capable of great things when the line-drive rate is at an optimal level. Here’s hoping for more of that in 2022!

Usually, players in their contract year have career-best seasons. That wasn’t the case for Trevor Story, who posted just a 100 wRC+. In other words, he was a league-average hitter last year. The main cause of this? A .293 BABIP that was significantly lower than his career .336 BABIP. Story’s 24.2% line drive rate was the lowest of his career, which is a shame; his 23.4% strikeout rate was also the lowest of his career. It’s unclear what Story’s batting average will look like outside of Coors Fields, but consider a .293 BABIP and .251 batting average to be the floor in 2022.