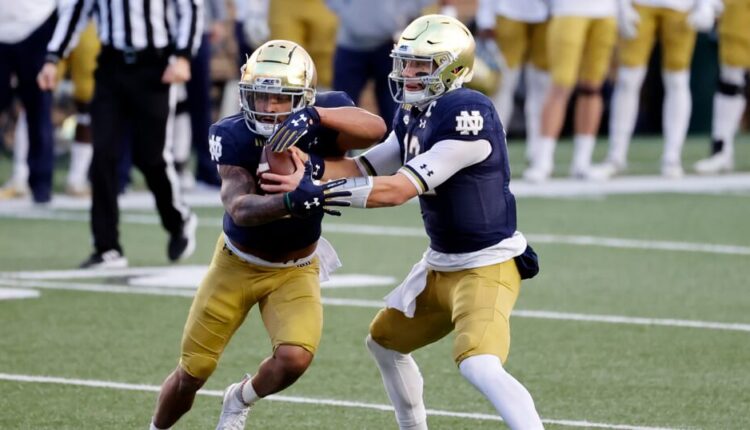 For 13 years, Thanksgiving weekend marked the conclusion of my CFF season-long teams but not in 2020. There must be a few leagues that are still playing. Therefore, I am providing a list of sleepers this week in college fantasy football for both DFS and championship lineups.

In full disclosure, I lost in two CFF Championship games last weekend. Luckily, I won a semi-final and have one more chance to put a ring on my finger to cap off a turbulent season. On a weekly basis, I have never worked harder on the waiver wire, spending countless hours replacing players in my starting lineups.

Around 11 AM last Saturday, I learned that RB Chuba Hubbard would not play for Oklahoma State and scrambled to acquire Desmond Jackson, who was the projected starter, in my DFS and season-long lineups. He detonated for 235 yards and three touchdowns, helping my 50-50 DFS lineups finish in the black.

A freshman, Jeff Sims has averaged over 20 fantasy points per game, scoring 166 points in 2020. The Yellow Jackets’ playmaker has passed for 1,492 yards, rushed for 385 and totaled 15 touchdowns. In six games, Sims has produced over 21 fantasy points while manufacturing less than 10 in the other two. The dual-threat signal caller exceeds 20 points for the seventh time this year.

Ball State kicks off against Central Michigan riding a three-game winning streak behind QB Drew Plitt, who erupted for 25.8 fantasy points versus Toledo last week. He surpassed the 300-yard mark for the second time and totaled three touchdowns. Both pass defenses rank among the bottom fifteen teams in the nation. The Cardinals are a road underdog, and Plitt will spend the fourth quarter slinging the football. The senior field general passes for over 300 yards and two touchdowns for the second straight game on Saturday.

At quarterback, Who Ya Got as a sleeper this week on the waiver wire?

In three games, Jarek Broussard has sauntered for 432 yards rushing and scored three times on the ground. He has also snatched four receptions for 36 yards. Since the Buffalos’ first game on November 7, Broussard ranks 34th among CFF running backs, scoring 68.8 points. A road favorite, Colorado will pound the pigskin on the ground with its sophomore ball carrier. Broussard eclipses the 100-yard barrier for the fourth time in 2020.

Over the past three weeks, only Jaret Patterson has scored more fantasy points than Calvin Turner among running backs. A graduate transfer from Jacksonville (FCS school), Turner produced 26.5, 36.7 and 25.5 points in three consecutive outings. In six games, he has scampered for 198 yards on 35 carries, secured 25 passes for 369 yards and recorded eight touchdowns. The ground matchup is tough, yet Turner earns the majority of fantasy points in the passing game. Against the Spartans, he should be targeted often.

After rushing for 409 yards, how many will RB Jaret Patterson, Buffalo generate against Ohio this Saturday?

On the waiver wire, Who Ya Got as a sleeper running back this week?

While making my DFS squad last Saturday morning, I originally identified Thayer Thomas in lineups but replaced him at the last second. The Wolfpack’s game-breaker exploded for nine receptions for 102 yards and three touchdowns. Fortunately, my decision did not prevent me from cashing in my contests.

In two of the past three games, Thayer has exceeded 36 fantasy points, scoring 36.5 versus Florida State three weeks ago and 36.2 against Syracuse. In between, the Liberty pass defense shut Thayer down with zero points. In 2020, the junior has established career bests with 36 receptions for 451 yards and six touchdowns. North Carolina State averages 31.9 points while Georgia Tech allows nearly 39 points per game. Insert Thomas with confidence on Saturday.

The Longhorns’ wide receiver corps has frustrated CFF managers all season. Over the past three games, Brennan Eagles has soared above the flock and become a viable fantasy starter. The junior has recorded 12 catches for 240 yards and two touchdowns. Against Iowa State, Eagles got open deep for five receptions for 142 yards, averaging 28.4 yards per catch. He leads Texas in catches (23) and yards (428) and is second in touchdowns (5). Eagles will surely get open behind the Wildcats’ secondary for another home run on Saturday.

“Considering most CFF teams are multi-quarterback, Willis has to be the easy answer.” @WWTSCFB

“I voted for Willis.” @SportsfanaticMB