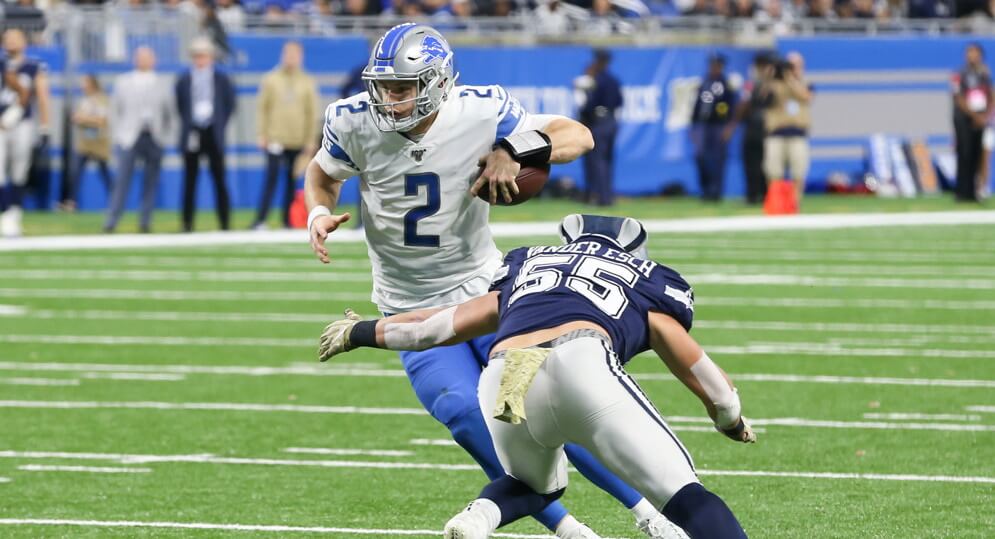 Week 11 was another ho-hum, according to Hoyle week in the NFL. Everything went exactly as expected. Jeff Driskel outscored Patrick Mahomes and Deshaun Watson combined. The two leading rushers for the week were Jonathan Williams and Gus Edwards. The Miami Dolphins had two top-12 fantasy wide receivers against Buffalo. Ryan Griffin led all tight ends in receiving yards. And the Atlanta Falcons D/ST scored more points than it had in its previous nine games – combined. What, did you not expect all of those things to happen? Welcome to fantasy football, friends. Let’s get ready for what figures to be another wild week of action with my Week 12 rankings along with some quick notes from around the league.

Jeff Driskel has now started two games in place of Matthew Stafford. He has finished as a top-12 fantasy quarterback in both games. While it is no sure thing that he gets another start, the Lions are essentially out of the playoff picture. There is no need to rush Stafford back anytime soon. Driskel offers elite speed for the position, as his 88 rushing yards through two games attests to. His rushing ability raises his floor, making him a bit safer than most QB2 options. If he gets the nod this week, his matchup is not a bad one. Sam Darnold just lit up Washington for four touchdown passes as pass-catchers ran free all over the field. Driskel is owned in just 15 percent of leagues and can be a nice replacement for those looking for a fill-in for Patrick Mahomes, Kyler Murray, or Kirk Cousins.

Before Sunday’s game, Detroit promoted Bo Scarbrough from their practice squad. The move did not generate a ton of buzz. The former Alabama standout was on his fourth NFL team and had yet to play a snap in the league. He was expected to run behind Ty Johnson and J.D. McKissic, if at all. Instead, Detroit featured Scarbrough throughout, and Scarbrough did not disappoint. He finished with 55 yards and a touchdown on 14 carries. It is anybody’s guess as to what his role will be next week, but Scarbrough is worth a speculative add in standard formats. Washington has allowed the fifth-most rushing yards to opposing backs this season, and Detroit has a decided edge up front. Keep in mind, however, that he is unlikely to contribute in the passing game. He comes in at RB22 in standard formats, but just RB32 in PPR in my Week 12 rankings.

The Indianapolis Colts pulled off a rare feat in Week 11. Three of their running backs posted top-24 fantasy performances. Leading the way was Marlon Mack with 109 yards and a touchdown. It could have been a much bigger day, but Mack left the game early in the third quarter with a hand injury that was later revealed to be a broken hand. Mack had surgery on Monday and is likely out multiple weeks. Those who have Mack rostered are left with some difficult decisions. If you need to win out this week and next to make your league’s playoffs, you may have to part with the NFL’s fifth-leading rusher. If you already have a playoff spot secured, Mack may be worth holding onto. I think both of his in-house replacements can be useful Week 12 options in Houston on Thursday night.

Jonathan Williams got most of the work once Mack was ruled out last week. As I mentioned above, he led the NFL with 116 rushing yards. Williams will be one of the most-added players this week, and with good reason. He should be the early-down back while Mack remains sidelined, making him a decent RB2 option. Jordan Wilkins may also figure into that mix. Nyheim Hines is not likely to see his role increase much based solely on Mack’s injury, but his skillset should play well in this matchup. Houston has allowed the most receptions and receiving yards per game out of the backfield this season. T.Y. Hilton and Eric Ebron are both iffy for Thursday, which could result in Hines getting additional targets. I have Hines as the RB31 in my Week 12 rankings in PPR leagues, making him a viable Flex play depending on your other options.

It is not often I discuss defenses here, but there has been a noteworthy shift in Atlanta’s D/ST unit. I mentioned earlier that Atlanta scored more points in Week 11 than they had in their previous nine games combined. Well, that is the second week in a row they had outpaced their year-to-date production. The week prior, they notched 10 fantasy points against New Orleans. They had scored just nine total points in eight games before their Week 9 bye. Their defensive numbers through the first half of the season were downright pathetic. They had allowed over 31 points per game while generating just seven sacks and four turnovers. In their last two games, they have 11 sacks, forced four turnovers, and have not allowed a touchdown. Atlanta made some adjustments to their coaching staff during their bye, and thus far it has made quite an impact.

What does this mean for the Falcons going forward? Well, I will not go as far as to say they will be a dominant defense for the rest of the season. But Atlanta is certainly in the streaming conversation. Week 12 presents a great opportunity for them to continue their recent play as they host the turnover machine that is Jameis Winston. Winston has already thrown 18 interceptions this season. For reference, Aaron Rodgers has 17 interceptions since the beginning of the 2016 season. Tampa Bay has also allowed 36 sacks this year, which is among the most in the league. If you are looking for a potential top-five fantasy defense on the wire this week, look no further than the Falcons.

Got a beef with Mick’s Week 12 Rankings? Let him hear it in the comments below!