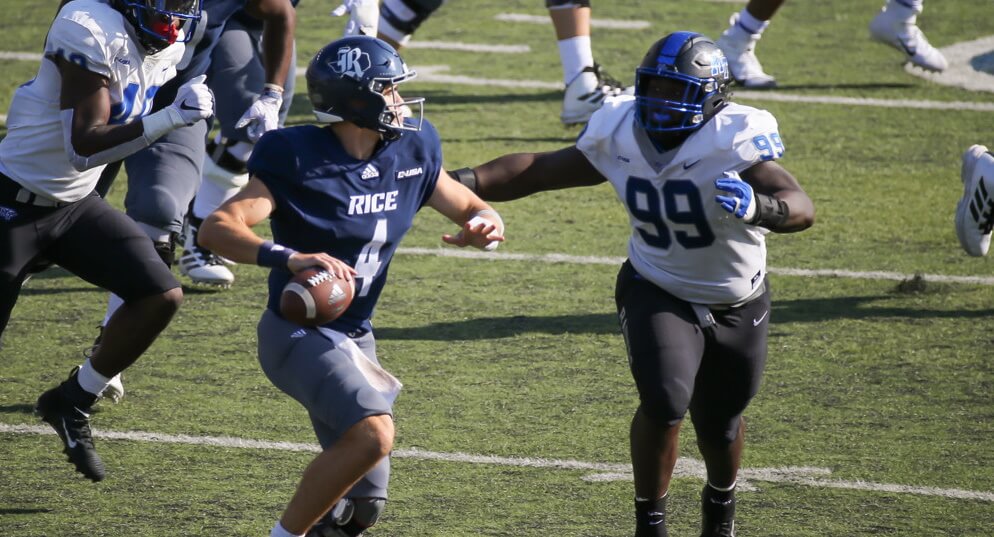 I must admit my inherent predisposition for Mike Collins to succeed as a college quarterback. I am a CT Yankee and remember reading about the New Canaan, CT prospect winning three consecutive state titles in high school. He also established a state single-season record for touchdown passes with 54 in 2015.

I have watched his college career from Penn to TCU, and now, at Rice. He arrived on campus as a graduate student and won the job in camp. “Mike has just been a head above, and not just on one day, he’s been consistent throughout camp. He’s executing our offense at a very high level, and he’s got an unbelievable arm,” coach Mike Bloomgren stated in mid-October (ricethresher.org).

In the Owls’ first two games, Collins opened the season incredibly hot, slinging eight touchdown passes. He has also totaled 475 passing yards and completed 30 of 52 throws. The 6’5” and 217-pounder has produced 26 and 25 fantasy points, which ranks the righty among the top 20 CFF signal-callers over the past two weeks.

The pitch-and-catch combo of Collins and WR Austin Trammell has clicked with 10 receptions for 219 yards and five touchdowns. Against Southern Mississippi and Middle Tennessee, the Owls have scored 64 points, which took five games last year to accumulate. Collins faces UTSA and Louisiana Tech in the next two weeks and should continue producing fantasy points.

Just before going to print, three games were canceled within the past 24 hours, and I had to pinpoint additional quarterbacks to pluck off the waiver wire after writing profiles that are now irrelevant.

Since replacing Keon Howard against Southern Mississippi, Michael Pratt has jettisoned among the surprise starters in college fantasy football. In five games, the freshman has passed for 895 yards, rushed for 108 yards and totaled 14 touchdowns. He has scored over 20 fantasy points in four games and posted a 133.0 QB rating.

“He (Pratt) has tremendous poise, way beyond his years. He’s into the game. He prepares all week, so it doesn’t surprise when he plays extremely well,” coach Willie Fritz indicated after the 38-3 blowout win over Temple (nola.com).

Over the last three weeks, the dual-threat signal-caller has produced over 74 fantasy points, ranking among the top 12 at the QB position. If you are like me and scrambling for a quarterback, Pratt is one of the best options still available.

With so many quarterbacks on bye or injured, who are you targeting as a replacement?

Identify the quarterback you are most excited to watch in the Pac-12 this weekend:

In the Week 9 Waiver Wire Gemstones column, I profiled Rahjai Harris as a free agent to acquire by CFF managers. He was only rostered in 5% of leagues at the time. Harris has been picked up by a few more clubs over the past three weeks, but he is still available in 85% of leagues.

Since the freshman took over the running duties for the Pirates, he has dominated opponents, rambling for 405 yards and three touchdowns, scoring over 69 fantasy points. Harris has logged three consecutive 100-yard games and averaged 6.5 yards per carry. He also is the eighteenth most productive ball carrier since October 10 despite playing in only three games.

I grabbed Harris on three teams this week to place into my flex position. The Pirates are a home underdog projected to score four touchdowns. There is no doubt that Harris has taken the helm of the ground game, and I expect another 20 carries in the matchup against the Green Wave.

In full disclosure, I made a huge blunder last week when making starting lineups. I inserted T.J. Pledger, who had garnered 22 carries in back-to-back outings. Unfortunately, he only earned six attempts while Rhamondre Stevenson led the Sooners backfield in carries with 13. More significantly, Stevenson scored three times while Pledger only crossed the finish line once.

Last year, Stevenson was suspended by the program after failing a drug test before the Peach Bowl. The bruising senior missed the first five games of the 2020 campaign while serving a six-game suspension.

“For me, it was just staying focused, and when my time came, I just had to make the most out of it. As for the process, it was frustrating but I knew my time would come. I just had to wait it out and work hard, practice hard, go through all the motions like I was playing my first game. Just had to wait until the six games were up,” Stevenson detailed in his first interview with reporters of the year on Wednesday (soonerswire.usatoday.com).

At 6’0” and 246-pounds, Stevenson pulverizes defenders and provides a unique weapon in coach Lincoln Riley’s offense. In 2018, the JUCO recruit graded four-stars by 247Sports and the No. 12 overall player by ESPN after rushing for over 2,000 yards on 222 carries and 16 touchdowns at Cerritos College in California. Stevenson can provide a nice boost to a CFF roster in need of backfield assistance.

If you need a running back this week, Who Ya Got on the waiver wire?

In the Pac-12, who will lead the Conference in rushing this season?

In the storied history of college football, Arkansas has won only one national championship (1964) since the school started playing in 1894. The Razorbacks have captured 13 conference titles and produced 45 All-Americans. Over the past five years in college fantasy football, there are not many roster-worthy playmakers at Arkansas.

Luckily with QB Feleipe Franks transferring from Florida, the Razorbacks aerial assault has successfully launched in 2020. And Treylon Burks is the beneficiary of improved efficiency in the passing game.

A four-star prospect by Rivals, 247Sports, and ESPN, Burks was the No. 11 receiver in the nation and a four-year letterman in high school. As a freshman, the Razorbacks employed Burks, 6’3” and 232-pounds, in many facets of the offense: running, receiving, throwing, and returning kicks. When the season ended, Burks paced the offense in receiving yards with 475 on 29 catches, averaging 16.4 ypc.

In 2020, Burks missed the Auburn game and barely saw the field against Mississippi State. Nevertheless, he is one of the most productive wideouts in the SEC with 26 catches for 366 yards and four touchdowns. Also, only four SEC receivers have three or more 100-yard plus receiving games this season: Elijah Moore (4), Jaylen Waddle (4), DeVonta Smith (3) and Burks (3).

His quarterback thinks that Burks can still improve. “I don’t think he’s reached his full potential yet. He’s a heck of a player, but at the end of the day, man, he’s continually getting better week in and week out. He’s worked super hard,” quarterback Franks stated (arkansas.rivals.com).

I am baffled that the Razorbacks’ playmaker remains available in so many CFF leagues on the waiver wire. I picked him up and inserted into the starting lineup on two of my teams this week. Why are so many in the CFF community waiting to obtain Burks?

My CFF: On Campus teammates and I always advocate investing in systems when analyzing a player’s potential. Is there a better offensive scheme than Memphis? The Tigers have not missed a beat on offense despite losing RB Kenneth Gainwell and WR Damonte Coxie. While WR Calvin Austin has dominated opponents and garnered more attention recently, Tahj Washington also deserves some adoration.

Over the past three games, Washington ranks among the elite playmakers in college fantasy football. Washington has snagged 14 passes for 312 yards and three touchdowns, averaging over 22 yards per catch. He has produced 65.5 fantasy points, ranking fifteenth at the receiver position, and scored the game-winning touchdown against UCF three weeks ago.

The redshirt freshman looks forward to the next step in his development. “I swear it still ain’t hit me yet. It’s just like, what’s next? It’s great,” said Washington (commercialappeal.com). Clever CFF coaches have taken notice, gobbling up the 5’11” and 175-pound speedster for this matchup versus South Florida.

I’m always scanning the waiver wire for starters at wide receiver: Who Ya Got this week as a sleeper?

In the Pac-12, who will lead the Conference in receiving this season?