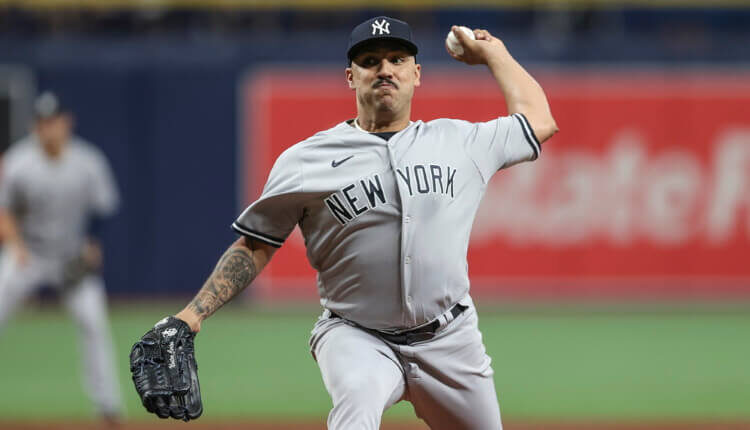 Don’t look now but it’s possible that Nestor Cortes will be the starting pitcher for the American League in the upcoming All-Star game. Cortes has dazzled all season with a 1.50 ERA and a 23.6 K-BB% which ranks 10th in baseball (minimum 30 innings pitched) in between Lucas Giolito (23.7%) and Dylan Cease (23.2). His biggest arsenal change is that he is throwing his cutter a career-high 39.5% of the time while slightly decreasing his 4-seam fastball usage. Both pitches have stunned batters. His underlying stats (2.19 xERA, 2.50 FIP, 3.00 SIERA) suggest some regression is coming but not too much. “Nasty” Nestor takes on the Minnesota Twins and the Chicago Cubs next week.

Kyle Wright is 5-3 with a 2.41 ERA and a 27.4 strikeout percentage in 59.2 innings this year. His stuff is electric and he is demonstrating plus command. Wright has two great matchups as he takes on the Oakland Athletics (29th in wRC+ vs righties) and the Pittsburgh Pirates (24th wRC+) this week. Should be another great week for the 26-year-old out of Vanderbilt.

Michael Kopech is now cemented in the White Sox rotation and unlike the team’s offense, he has not disappointed. Kopech has a 2.20 ERA with a 1.02 WHIP. Batters have only .234 WOBA and a .209 xBA against him. Next week he faces the Los Angeles Dodgers which will obviously be a tough test but then he takes on the Texas Rangers.

After a few awful years in Texas and Boston, Jeffrey Springs has turned around his career in Tampa over the last two seasons. In 38.1 innings this year, he has a 1.88 ERA with 40 strikeouts. Before the 2022 season, Springs was strictly a bullpen arm so I am a little concerned about whether or not he will pitch more than five innings. Even if he doesn’t go five, he should be able to improve your ratios while wracking up some strikeouts. However, proceed with caution. Shane Baz is supposed to rejoin the rotation this week so it’s possible his start gets bumped to next week. Corey Kluber could also have two starts instead of Springs.  Make sure to double-check the probables grid before you make any moves. The Rays are notorious for changing their rotations last second.

Coming into the 2022 season, Graham Ashcraft was the eighth-ranked prospect in the Cincinnati Reds system. Since his call-up in mid-May, Ashcraft has taken on the Blue Jays, Giants, and the Nationals. In the first 17.2 innings of his big league career, Ashcraft has a 1.53 ERA and a 0.96 WHIP. He has done a great job limiting hard contact but he has only struck out 12.7% of the hitters he has faced. I do expect that to climb a little since he had  219 strikeouts in 197.1 minor league innings. He will face the Diamondbacks and the Cardinals next week.

The 24-year-old Cleveland Guardian, Konnor Pilkington, is another rookie showing some promise this year. Pilkington has a 29.1 K% with a 2.65 ERA across 17 innings. Last time out against the Kansas City Royals, Pilkington finally went five innings on his way to his first career win. Next week he will face the Texas Rangers and the Oakland Athletics in two favorable matchups.

Trevor Rogers is one of the biggest disappoints in fantasy baseball this year. Last year, Rogers gave up 39 runs in a career-high 133 innings. This year, Rogers has given up 29 runs in just 45 innings. His strikeout percentage has plummeted from 29.5% in 2021 to just 19.2% in 2022. Until further notice, I cannot recommend him unless you are in daily league and you want to take advantage of his match-up against the Nationals. With that said, stay far away from the Astros matchup.