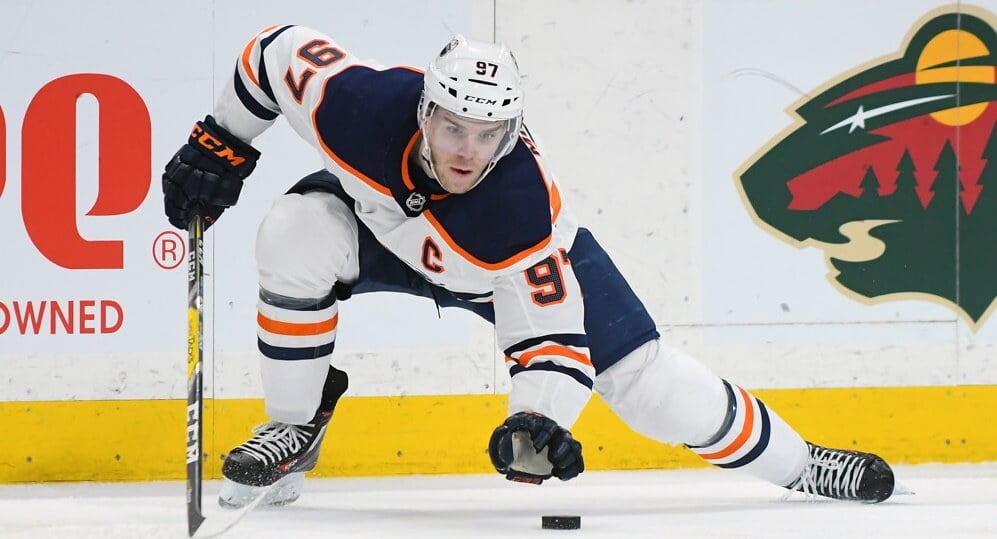 There was much to consider as we were putting together our overall 2021-22 Fantrax Fantasy Hockey Rankings. Obviously, the individual skill of the player is important, but so is the team context, division, and player position. For these rankings, the standard categories considered for skaters are goals, assists, power-play points, shots on goal, hits, and blocks. For goalies, they are wins, goals-against average (GAA), save percentage, and shootouts.

The top tier of players is either those who give tremendous value at one or two categories, in the range of two to three standard deviations above the mean, or those who fill the categories relatively evenly without having any holes. Examples of these types of players are Connor McDavid, Nathan MacKinnon, and Leon Draisaitl who were consensus top-five forwards, and Victor Hedman and John Carlson who are defensemen who fill all categories.

One of the biggest variances you will see in our fantasy hockey rankings is with respect to goalies. Though Andrei Vasilevskiy was a consensus first-round pick by our panel, he was the only one. The next goalie was Robin Lehner at 16 and the one after Connor Helleybuyck at 25. Aside from Vasilevskiy, there is hardly a sure thing in net and you might be as likely to get a top 10 goalie with your 7th or 8th round pick as your 2nd or 3rd. This is the reason I fade goalies and why they are a bit lower on this overall list. As an example, here are the top goalies from 2020-21 according to the standard categories and the average draft position (ADP) they were taken:

When you look at the same list for forwards, there isn’t as great a variance. Most of the top forwards by ADP are the top forwards by end of season rank. The order may be slightly different, but the value you get is roughly what you’d expect. The reason is the top players on each team are the ones who get power play time and the majority of the ice time. You generally know who those players are at the beginning of the season and even though their performance can vary a little, it doesn’t completely tank.

Wins and GAA are really more team statistics than goalie numbers so the netminder has little control over those. This is part of the reason why their value can swing wildly from season to season as personnel on the team, quality of competition, and any number of other variables shift from season to season. This is why I pushed goalies pretty far down the list.

It is really difficult for rookies to make a big impact in the NHL. For example, last season Kirill Kaprizov had a fantastic rookie season, winning the Calder Trophy and he was 167 in these standard categories. That means that anyone who drafted him before the 12th round, did not get value out of Kaprizov. Jason Robertson, on the other hand, who was the runner-up, finished 297. So unless you had 21 rounds in your draft, he wouldn’t have been drafted. So for all the exciting young players you are tempted to draft, you probably should take the proven veteran instead, unless it is toward the end of your draft and you might drop that player anyways.

Most of the players in the top 50 of our fantasy hockey rankings are ones you suspect. The order might be slightly different than what you suspect though. Some of the players near the top really split our expert panel and had a high variability of their rank. Artemi Panarin was viewed by half the panel as a first half of the 1st round talent, the other half had him solidly as a second or even early third-round pick. Panarin clearly excels in getting points, particularly on the power play, though his hits and blocks are very low and you’ll be lucky if he gets you three shots in a game. Because he’s so low in half of the categories, there is reason to see why some of us were not as high on him.

Alex Ovechkin was ranked as high as fourth by one expert and as low as 29th by another. The inevitable slowdown will come for one of the league’s greatest, but he’s shown that he can still deliver a ton of shots, goals, hits, and power-play points so I’m betting this is not the season his fantasy value tanks. Especially chasing down Gretzky’s record, he will be motivated. I probably wouldn’t reach for him, but taking him the later half of the 1st round should be fine.

Roman Josi is probably the defender that we most disagreed on. I had him 6th overall and others had him 39th and 82nd. Sure, the Nashville Predators aren’t what they used to be, but the departure of Ryan Ellis should mean they lean on Josi even more. I’m assuming Josi does take a dip in power-play points, but he is one of the few defenders that can really fill the categories, and with all that ice time, I imagine he will yield tremendous value. Certainly more than a 6th rounder, though I’d be ecstatic to get him that late.

Another defender we couldn’t agree on was Neal Pionk. His ranking ranged from 46 to 137. Josh Morrissey did get more power-play time on ice last season, though it was Pionk who had more power-play points with the diminished role. Certainly, the lack of certainty for his role could justify lower his position a bit. On the other hand, Pionk had many more points and hits than Morrissey with fewer minutes so it doesn’t seem like it will be an issue, even if the Jets continue to prefer the left-handed Morrissey to the right-handed Pionk on the power play.

There were a few players that the panel didn’t seem to know what to do with. Evander Kane was one such player. With his financial issues compounded with legal and locker room issues, it seems conceivable that Kane might not play a full season or at least get moved from the Sharks. On the other hand, he is too valuable not to rank.

Sam Bennet went on an absolute tear when he arrived in south Florida. Fifteen points in 10 games equates to a 123-point pace. I don’t think any of us actually believe that is going to happen, but he also likely won’t be as big of a fantasy dud as he was all those years with the Calgary Flames. The truth is somewhere in the middle and we just don’t agree on where that is. He was ranked as high as 69 and as low as 146. One expert didn’t even rank him so there was considerable variance. If he is available near the end of your draft, he’s certainly worth a flier, but I’m guessing he goes before round 10 in most drafts.

If you want to listen to me talk about these players every week, listen to Fantrax’s podcast Fantasy Hockey Life.  Jesse Severe and I cover prospects and the pros.  Listen to our offseason previews for all 32 NHL teams.  Follow me on Twitter at @victornuno12.  You can also join our free discord to talk hockey all year.

Did you enjoy our 2021-22 Fantasy Hockey Rankings? Then you’ll definitely want to check out our 2021 Fantasy Hockey Draft Kit. New content is added every day.