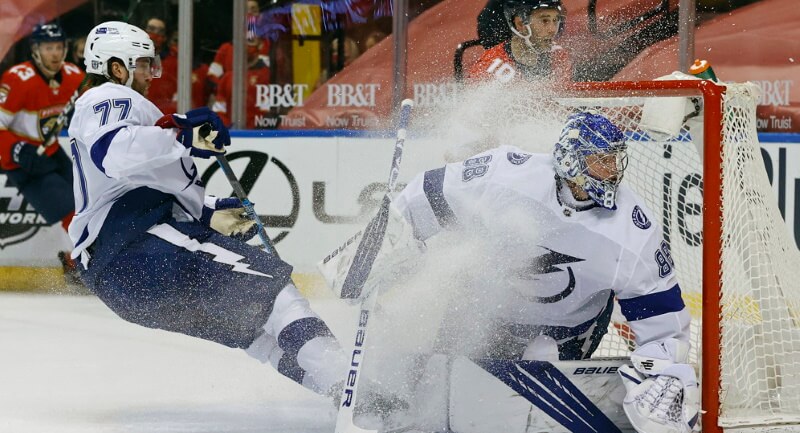 Defensemen in fantasy hockey can be tricky to evaluate. There are a select few that can be counted on to rack up even-strength and powerplay points, but often the success of your fantasy team comes from those defensemen who block shots, rack up the hits and help out those unsexy fantasy categories. Chase the points or not, that is the question?! We have put  4 of our fantasy experts together; Jesse, Victor, Brennan, and yours truly and compiled our pre-season fantasy rankings for defensemen.

Youth is the rage in the NHL, so when preparing for your 2021-22 fantasy season be open to going young and letting go of some of the past. To go young or old is at the heart of who is our highest-rated defenseman, Cale Makar or Victor Hedman? Even though 3 of our experts have Makar in the #1 position, an 8th place ranking by Victor allowed Hedman to squeak to the top with an ever so slightly higher average than Makar. It would be difficult to argue against either of these two players in the top seed. The remaining 3 spots in the top 5 are completed with veterans; Roman Josi at #3, John Carlson at #4, and the New Jersey Devils, Dougie Hamilton at #5. I have to admit, despite having a couple of months to get used to it, Hamilton as a Devil still makes me do a double-take.

While Norris Trophy winner Adam Fox at the #6 position, represents the younger D, we have more veteran defensemen completing the top 10. Positions 7-10 are Jeff Petry, Kris Letang, Shea Theodore, and Tyson Barrie. While all these players have earned their spots, my personal top 10 would include Thomas Chabot(#11), Quinn Hughes  (#12), and Darnell Nurse (#13). For the most part, our panel was not far off each other with their evaluations. Darnell Nurse being the biggest exception. Victor and I had Nurse at #4, while Brennan had him #18 and Jesse at #25.

Outside the top 10, there are few players who should be high on your radar for this season as potential top 10 fantasy players. Jakob Chychrun (#14) and Charlie McAvoy (#17) are examples of two players who continue to improve and now have excellent fantasy value. I can see both of these players continuing to move up the rankings. Also, keep your eye on a few of the vets, who have taken a step back the last year or two. Alex Pietrangelo at #24, Erik Karlsson at #30, and Ryan Ellis at #37 all still have fuel in the tank and are capable of bringing their production back up. Circle these guys as you may be able to get them undervalued.

While a full article on defensemen that fantasy managers may be sleeping on will be coming soon, I’ll mention one rookie and one vet sleeper prediction here. Let’s ignore the situation in Buffalo as it looks like they will be rebuilding again. Rasmus Dahlin is the real deal. The former #1 overall will make our  #28 ranking come back and bite us. On the rookie side, we have Moritz Seider at #67. While this is a fair ranking for someone who has not played any NHL games, all indications are that Seider will step into a top 4 role with the Red Wings this season. Seider has excellent fantasy upside. As a fantasy manager, this may be your one chance to grab him, before he becomes a perennial keeper.

For more rankings and analysis, check out our 2021 Fantasy Hockey Draft Kit. New content is added every day.