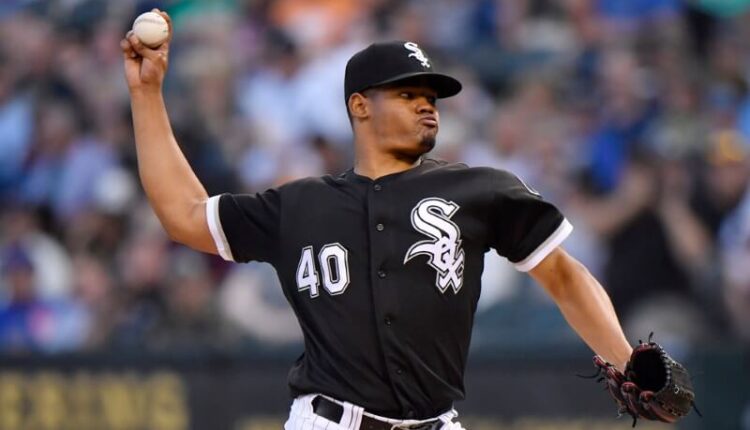 In this installment of our fantasy baseball buy or sell series, we’re looking at two pitchers that have performed well recently. We only have a few weeks left in the fantasy season, which means we’re either making a playoff push, looking to win some titles, or monitoring some late-season successes and struggles. Reynaldo López and Bailey Ober look like two pitchers we need to watch as potential sleepers in 2022.

Admittedly, I hadn’t heard of Bailey Ober before a few weeks ago. Meanwhile, it looks like Reynaldo López is making a comeback with eye surgery and the White Sox pitching coaches. Let’s see what’s going on with both pitcher’s profiles to see if we should buy or sell their skills for 2021 and beyond.

Fast forward to 2021, and Reynaldo López returned to the majors in the middle of July. The team used him primarily out of relief, with four starts heading into September 1. López often threw multiple innings in relief in 2021 with shorter starts. However, what stands out involves the career-best 27.1% strikeout rate and 5.7% walk rate. Sure, it’s a small sample, but the White Sox have also helped Carlos Rodón breakout for his career-best season.

Reynaldo López had surgery on both corneas to deal with blurred vision. Should return to Charlotte roster in three weeks.

However, back in early May, Reynaldo López underwent eye surgery to help with blurred vision. An article in The Athletic quoted López stating it “helped me a lot,” specifically about the struggles with seeing, “the pitch that the catcher was calling.” In this same article, López absorbed the guidance from pitching coach Ethan Katz to make adjustments to his delivery.

We note the information from the beat writers because we’re noticing a vastly different Reynaldo López in 2021, even if it’s a small sample. It explains some of the changes behind the scenes.

Before we dive into Reynaldo López’s pitch mix, it’s important to remember that we’re dealing with a small sample in 2021. López filled in for Lance Lynn over the weekend and struggled in a weak matchup against the Royals. He gave up three hits, three earned runs, and one walk with one strikeout.

As a primary reliever with López, he relies heavily on the four-seamer and slider. In the past, López would mix in a curveball or offspeed pitch a bit more. However, in 2021, López uses a four-seamer over 58% and the slider at 35.7% of the time. With two pitches accounting for over 93% of the pitches thrown, López is barely using the changeup and curve in 2021. López typically threw the third pitch at a double-digit rate, so it’s safe to wonder if it’s partly a reliever gameplan for now.

The velocity on López’s four-seamer looks similar to previous seasons. However, López’s slider jumped to 86.4 mph, which never reached that point since 2017 when he threw the slider 13 times. With that added slider velocity, that pitch boasts a career-high with horizontal movement given the 5.8 inches of break just under one (0.9) inch more than the average. In previous seasons, López’s slider broke about 2-3 inches, but poorly versus average sliders. Although his slider isn’t eliciting a mind-blowing amount of whiffs, the velocity on the pitch is something to monitor.

Should We Buy or Sell López?

At this point, fantasy managers scooped up Reynaldo López off the waiver wire, so he likely isn’t available in most 15-team leagues. However, López might be hanging around in some 12-leagues or smaller. Since Lucas Giolito and Lance Lynn hit the injured list, López will start again on Thursday against the Athletics.

Even in 15-team dynasty leagues, it’s worth speculating on Reynaldo López if fantasy managers cut him earlier this season. Especially if you like the narrative regarding the eye surgery plus pitching coach Ethan Katz helping López’s delivery, then one should buy rather than sell López’s changes in 2021 and beyond.

One of the best aspects of baseball involves asking myself, who the heck is Bailey Ober? The 6-foot-9 righty has gradually improved throughout the season, particularly in August. Through 78 2/3 innings pitched in his MLB debut season, Ober boasts a 4.00 ERA and 1.22 WHIP with a 25.1% strikeout rate and 5.3% walk rate.

However, through five starts in August, Ober has put up a 2.30 ERA and 1.10 WHIP with a 23.9% strikeout rate and 2.8% walk rate. He has stranded over 90% of the batters with a slightly higher .303 BABIP during the early months. In three of those starts, Ober faced the Astros, White Sox, and Red Sox, three of the top offenses in baseball. At this point, Ober isn’t likely hanging around on the waiver wire even in 12-team leagues.

Ober didn’t last long against Cleveland after giving up six hits, two earned runs, and zero walks with four strikeouts. However, it sounds like the Twins planned on having Michael Pineda follow Ober, so don’t overreact to the short outing.

Bailey Ober doesn’t blow hitters away with his 92.3 mph fastball that he uses just under 59% (58.8%) of the time. He also sprinkles in a slider, changeup, and curveball at a double-digit rate. Since Ober’s pitches don’t pop off the page from a swing and miss standpoint, he appears to rely heavily on his command and control. Ober also pitches to contact and mostly fly balls, given the 43.9% fly-ball rate.

Although Ober heavily relies on the four-seamer, it rates as one of his best pitches via wOBA allowed and Run-Values. Nothing stands out movement-wise on the four-seamer, but Ober’s changeup boasts a 1.8 inches more horizontal movement than the average changeup. However, Ober’s four-seamer possesses a -10 Run-Value. He typically pinpoints it up in the zone.

Should We Buy or Sell Ober?

Although Bailey Ober doesn’t have the flashiest stuff, he limits the walks and commands each pitch well. The ERA estimators have Ober sitting with a mid-4.00s ERA with a 4.44 FIP and 4.43 xERA. However, Ober’s 3.98 xFIP and 3.85 SIERA fall near his current ERA, just under 4.00. Ober thrives in the shadow area and heart of the zone, as we see with many pitchers that rely on command and control. 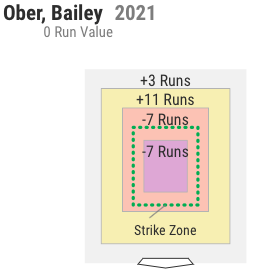 When we consider the long-term expectations for Ober, the Twins rotation looks wide open. Since the Twins traded José Berrios and they lost Kenta Maeda to Tommy John surgery, they have some pitching spots up in the air. A few notable names outside of Ober include Joe Ryan, Griffin Jax, Michael Pineda, and John Gant (stop walking everyone).

That said, if Ober finishes the season strong, consider buying into Ober as a late-round pick in 2022 redraft leagues. Think about Ober as a pitcher with a skillset like Chris Bassitt, where he could provide quality ratios with a decent K-BB%. One wildcard to monitor with Ober includes the changeup. Per Fangraphs, Ober’s changeup grades as a plus-pitch, and it boasts above-average horizontal movement. If that pitch improves, especially as a weapon against lefties, Ober could take a small leap in 2022. That would add to the confidence of buying rather than selling this “boring” yet helpful profile.