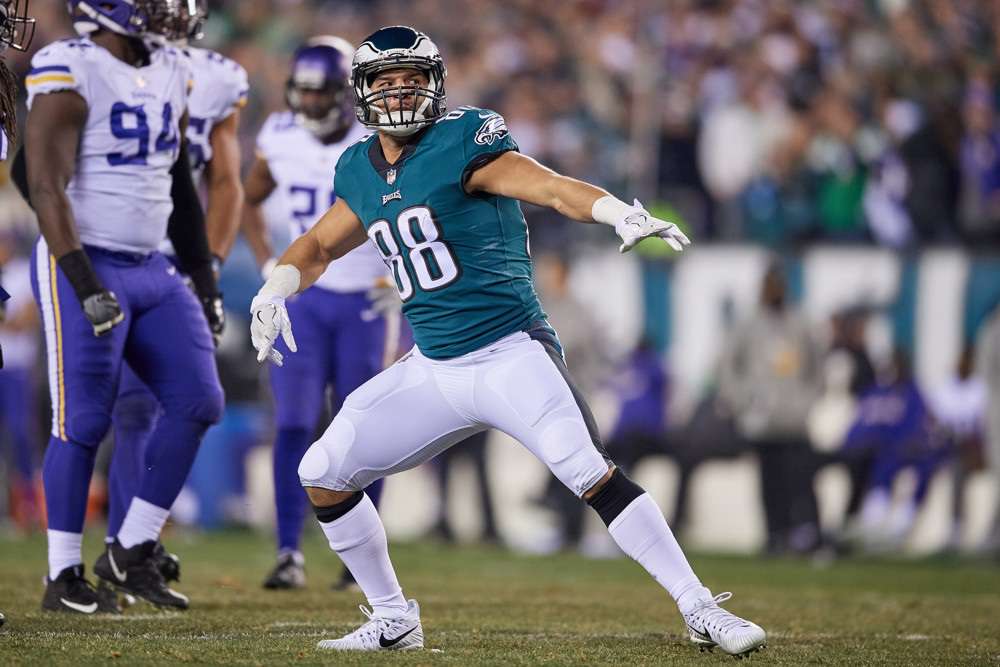 Ah, the tight end. The position kind of reminds me of cousin Eddie from the National Lampoon’s Vacation movies. Nobody really wants them at the party but sure enough every Thanksgiving, he shows up with his RV asking you to save the neck of the turkey for him. Nobody wants cousin Eddie at the party and putting a tight end in your lineup feels kind of the same way. However, there is a fool-proof strategy to drafting tight ends. Wait on them. The appeal of taking a Rob Gronkowski or Travis Kelce is obvious but you will have to pay high draft capital for a position that only takes up one roster spot. The way to minimize risk in Fantasy Football is to stock up on running backs and wide receivers that make up the bulk of Fantasy rosters. Keep that in mind as you dig through the Tight End Rankings further down the page.

With all of this hate coming out of me for the tight end position, truth be told, I do enjoy seeking value at the position later in drafts. I will never under any circumstance be caught in the eighth round drafting Delanie Walker. Nothing against the guy – he is a great player. But, we know what we are going to get from him and there are tight ends later on that will produce equal or greater week-to-week production as Walker. This is why I do tight end rankings. In the 11th round when I am sitting there without a tight end rostered, instead of scrambling, I have a few guys in mind, who I feel can exceed their draft price – and if they don’t, that is okay. Streaming the position works out as long as you play the matchups correctly.

It’s time to invite cousin Eddie into the guest room and talk tight end rankings. The top tier is pretty straightforward, so let’s focus our analysis on the second tier of tight ends. That’s where the value lies in 2018.

Rudolph is going to catch 50-plus passes in 2018 which is a nice floor to have with a tight end. There are not many at the position who can make that claim but Rudolph has been consistent when healthy. Last season with Case Keenum Rudolph was targeted 81 times for 57 receptions, 532 yards, and eight touchdowns in 16 games.

Rudolph has played in 16 games for three straight seasons which is also rare at the position. He goes into this season with a new quarterback in Kirk Cousins, who has a reputation for finding the tight end. Whether it be Jordan Reed, Vernon Davis, or even Niles Paul – Cousins has utilized the position for his entire career.

Like Reed, Rudolph often lines up in the slot which is something I like to consider when drafting tight ends because it means more opportunity in the passing game. Also like Reed, Rudolph is a big body in the red zone that Cousins will fall in love with. Last year’s TE7 has Top 5 upside if he can delve into the double-digit touchdown range in 2018.

Burton is about to become one of the premier tight ends in the game. He was brought into the Bears organization to fill a role that Matt Nagy has utilized for years with Andy Reid – the versatile tight end. Burton is a great pass and run blocker as he was predominately used as such last season for the Eagles. However, it is his athleticism and ability to run after the catch that is going to set him apart from most at his position.

In his two starts last season Burton was targeted 13 times for nine catches, 113 yards, and two touchdowns. These games put him on the map and he later shined on the biggest stage in Super Bowl LII when he threw a touchdown pass to Nick Foles which will forever be known as the “Philly Special.”

The Bears are going to move Burton around which will predominantly include lining up in the slot. Mitch Trubisky will be the key in Burton’s success. He will have to buy into Nagy’s system and hang in the pocket long enough to find one of his best targets.

At 6’3″, 235 pounds Burton is fast for his size and stout enough to run precise routes underneath. According to Playerprofiler.com Burton ran a 4.62 40-yard dash at the NFL Combine which is in the 86th percentile for a player his size. The Bears will use him as much as they can as he enters 2018 as one of the team’s best playmakers.

Walker has surpassed 800 yards in four straight seasons and has finished as the TE9, TE5, TE5, and TE6 since 2014. He has been one of the most consistent players in Fantasy Football and is a player you can draft and leave in your lineup regardless of matchup. I stated earlier that I will never draft Walker, and it’s true. However, there are few tight ends you can plug and play every week and Walker is one of them.

The seventh round is too early when there are players on the board like Sammy Watkins and Marlon Mack; guys I feel good about at premium positions. But, there is no denying Walker is a safe pick in 2018. His role has not changed and he was targeted 111 times in 2017 for 74 receptions and 807 yards with three touchdowns. He will be 34 in August but there is no doubt he fits in the Top 10 of the tight end rankings.

According to Rotoworld.com, Jordan Reed is expected to be ready for training camp after being limited at OTAs. Reed has a reputation for being injury prone and played in a career-low six games in 2017. It is pretty scary that we have not seen the peak of Jordan Reed considering that in 2015 in 14 games he was able to put up 87 receptions on 114 targets and 11 touchdowns. Simply put, Reed is one of the best tight ends in the game and is easily inside the top three in tight end rankings if he can play 16 games. It is tough to project that outcome, however, since the five-year veteran has never participated in a full season.

His eighth-round draft price is risky but if you are bold enough to take him there, it could pay off in 2018. Alex Smith has always been tight-end friendly and even though he will be reunited with his old pal Vernon Davis, Reed will be the number one option in the Redskins passing game if he is on the field.

Eifert fits the same mold as Reed as an injury risk who is absolutely dominant when on the field. In 2015 he was the TE6 thanks in part to his 13 touchdowns. But, the future looks bleak for Eifert. He is currently ranked as my TE11 but only managed to appear in two games last season. He has been dealing with a back injury for years now that has caused him to miss significant time in the last two seasons.

If he is cleared to play he will be a TE1 in Fantasy Football in 2018, but his injury history will not give Fantasy owners a sense of comfort this season. If he is ready for Week 1 he will be worth drafting. If he misses part of the year he has a chance to be a great Waiver Wire pickup mid-season.

Njoku is an athletic freak. He was a standout at the University of Miami and led the Hurricanes with 16.6 yards per reception in his two collegiate seasons. His measurables on PlayerProfiler.com are off the chart and his role looks to expand in 2018. With subpar quarterback play in 2017, Njoku was only able to manage 32 receptions for 386 yards and four touchdowns. He goes into 2018 with a revamped offense that looks to be nothing short of explosive.

Tyrod Taylor will be the starter for the Browns and he used his tight end Charles Clay often for the Bills. I believe that Njoku will be able to exploit defenses that will be worried about Jarvis Landry and Josh Gordon on the outside. He can be taken in the 14th round and has TE1 upside because of sheer talent. Taylor is a competent enough quarterback to be able to target Njoku five to seven times a game. The second-year pro should be able to return value for drafters who will not have to spend much on draft day.

For more rankings and great fantasy football analysis check out all of our 2018 Fantasy Football Draft Prep.