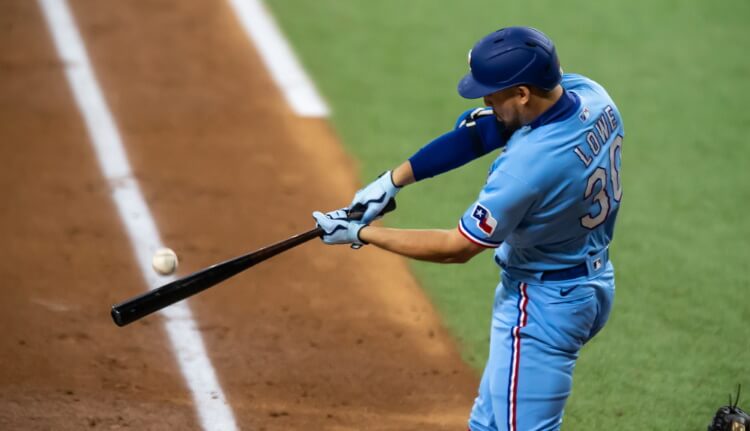 Knowing when to give up on players is tough. Some guys never figure it out. Some guys produce early on, only to completely fall off fantasy radars. The tricky part is figuring out who has a chance to succeed despite the struggles. These hitters have disappointed recently, but you may be surprised when they go from duds to studs in 2022.

From Duds to Studs: Hitters

Maybe Nathaniel Lowe will be who we thought Nate Lowe could be. Of course, it is going to take more than a name change for him to be fantasy relevant in 2022. What has me most excited for him this year is his opportunity. Last season, Lowe and Adolis García were the main offensive contributors for the Rangers after the Joey Gallo trade. Clearly Lowe isn’t the kind of player to build your offense around, at this point anyway. He slashed .264/.357/.415 with 18 HRs in 557 ABs in his first full season last year. Not the power output you would want from your first base position. But, he contributed enough to be optimistic.

The Rangers went out and added Corey Seager and Marcus Semien to a lineup that desperately needed some juice. Now, with Seager and Semien projected to hit in front of him, Nathaniel Lowe is in the perfect spot. For a first baseman, Lowe had a manageable K% last season. He had a 25.2 K% in 2021, down from 36.8% in 2020. His walk rate was impressive last season, sitting at 12.5%. For a player in his first full season, those are good numbers to build off of.

Now, how can Lowe go from a dud to a stud in 2022? Well, hitting the ball in the air more would be a good start. Lowe has seen his ground ball rate increase each of the past three seasons. Unsurprisingly, the launch angle has been going down, sitting at a measly 5% last season. He hits the ball hard, which makes that 5% launch angle frustrating. Sitting only 0.2 MPH behind Pete Alonso, Lowe had an average exit velocity of 90.8 MPH, good for 34th in MLB last year. If Lowe can produce more fly balls, he has a good chance to smash his 2021 home run output. With Seager and Semien bringing more run-scoring opportunities to this lineup, Lowe could have a huge season if he can elevate his swing.

One last reason why I am willing to gamble on a power surge for Lowe is because of who his new bench coach/offensive coordinator is. Donnie Ecker was brought in from the Giants in the offseason after serving as their hitting coach. We saw how San Francisco’s offense outperformed expectations thanks to veterans like Buster Posey, Brandon Belt, and Brandon Crawford. If Ecker can help those veterans revitalize their hitting, I’m excited to see what he can unlock in Nathaniel Lowe.

A player many have lost patience for, Bohm still hasn’t produced to the level most were expecting. 540 career plate appearances is a solid sample size, but not large enough to give up on someone, especially with Bohm’s pedigree. My colleague Eric Cross wrote an article at the end of 2020, following Bohm’s 2nd place NL ROY finish, highlighting why he can be a star.

A lot of what Eric wrote back in 2020 is still true now. Bohm hasn’t been able to tap into his raw power because of his launch angle issues. But, between 2020 and 2021, his launch angle rose from 4.8% to 5.6% and his ground ball rate fell from 54% to 52.7%. I know, they aren’t very big improvements, but they are improvements nonetheless. I bring them up because we also have to remember that Bohm had a way worse season in 2021 than 2020. But, in the midst of an unimpressive sophomore season, Bohm’s (slight) improvements give me hope that 2022 is the year he puts it all together.

Bohm was uncharacteristically bad at the plate in 2021. He had a 26.6 K% with only a 7.4 BB%, resulting in a .247/.305/.342 slash line. These numbers contradict every professional season Bohm has played thus far. With his history of an advanced plate approach, I’m optimistic that his K% and BB% will regress to what they have been his whole career. His launch angle may never reach the double digit percentages, but Bohm has the contact and plate skills to hit for a high average, drive in runs, and contribute in the middle of the Phillies lineup. There’s still a breakout coming for Bohm, and I will stand by that until he is out of the league entirely.

Hiura has almost the exact opposite issues compared to the previous two players. The launch angle has sat around 15% in his short career, but the strikeouts have deemed Hiura unplayable recently. With a 39.1 K% last season, Hiura found himself spending time at the AAA level. Once a star in the making, Hiura needs some serious adjustments if he is going to be contributing to anyone’s fantasy team.

The universal DH is one reason why I believe Keston Hiura can go from a dud to a stud this season. After last season’s showing, the Brewers have no reason to play him every day, or even at all. But, the DH gives Hiura a chance to focus on hitting. He can re-establish himself as the power threat he showed to be in 2019 without having to play the field. I don’t think the strikeout rate will ever be below 30%, but it doesn’t have to be. Hiura had a 30.7 K% in his rookie season which saw him slash .303/.368/.570 with 19 HRs and 49 RBI. His xBA was drastically worse at .256, but I’ll take that when you strike out almost a third of the time. If he can get anywhere close to his 2019 production, Hiura will be a steal at his current price.

You might be wondering why I’m telling you to invest in a hitter who has gotten worse each of the last three seasons. For one, Hiura had a breakout rookie season followed by the Covid season of 2020 and a tumultuous 2021. I’ll give anyone a pass for 2020. While 2021 was discouraging, there wasn’t much consistency for Hiura with the Brewers. He only received 197 plate appearances all season, and wasn’t given much of a chance when he began to struggle. He has a big leg kick, which he has reportedly been working on toning down a bit with his longtime hitting coach. If he can make adjustments to his approach and bring his strikeouts down to even 30%, I don’t see why Keston Hiura can’t produce numbers similar to his 2019 season. I wouldn’t expect an average above .250, but if he can make more contact and strikeout less, Hiura has a chance to go from a dud to a stud in 2022.

The beauty about these players is that there isn’t much risk. They are all going after pick 200, so they can easily be dropped if they can’t produce early on. But after digging deeper into their profiles, there’s no reason they can’t go from duds to studs this season.