Alec Bohm: Star In The Making

A big part of fantasy baseball is trying to find the next big star. We all try to do it and there’s no shame in admitting so. When we do find a star and invest while the price tag is reasonable, it makes it that much sweeter when that player is dominating for our fantasy teams as an annual early-round asset. Especially when that star wasn’t necessarily a stud prospect like Ronald Acuña Jr, Juan Soto, or Fernando Tatis Jr. That’s what I’m trying to accomplish today with Mr. Alec Bohm following his impressive rookie season with the Phillies.

Alec Bohm, Star In The Making

Consistency is something I’ve come to appreciate more and more as I get more experienced as an analyst. Hence why I’m so high on Alec Bohm. His Wichita State career wasn’t dominant, but he excelled at the plate every season, especially in his final season which vaulted him up draft boards and into the Phillies’ lap at #3 overall in the 2018 draft. He even showed his skills in the wooden-bat Cape Cod League as well, slashing .351/.399/.513 in 39 games back in 2017.

The only time he ever struggled a bit was his 40-game professional debut after the 2018 draft, but Bohm quickly erased that from the memory banks with a .305/.378/.518 slash line and 21 homers in 125 games in 2019 while climbing three levels up to the Double-A Eastern League. Same story in the Arizona Fall League too. Bohm has hit everywhere he’s been and I’m not expecting that to change anytime soon.

The Phillies summoned Alec Bohm from their alternate site on August 13th for his Major League debut and started him in nearly every game from that point on. With how he performed, they had no reason to take hit hot bat out of the lineup. Bohm started hot with six hits in his first five games, finished hot with a five-game hitting streak including four multi-hit games, and mashed basically all season long. The end result was a .338/.400/.481 slash line with four home runs, 23 RBI, 24 runs scored. And as I’ll get into more below, Bohm’s exceptional plate approach carried over from the minors with an 8.9% walk rate and a 20.0% strikeout rate. His statcast data looked awfully pretty too. 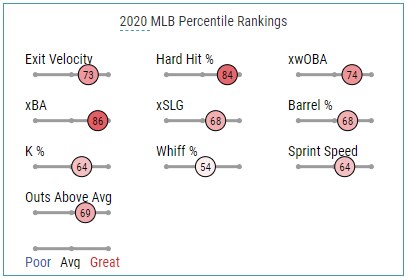 Sure, the sliders aren’t burning red, but there’s a lot of shades of pink there, impressive for a rookie hitter. Bohm appeared to get more and more comfortable at the dish as the season wore on too, finishing with a .367/.421/.514 slash line in September.

This has been a strength for Alec Bohm dating back to his collegiate days at Wichita State University. When you see Bohm for the first time, you’ll notice that he’s on the taller side at 6’5. I’m sure I’m not the only one that sees these taller players and immediately think about a longer swing and strikeout issues. That’s simply not the case with Bohm. Not even close actually. Bohm has never had swing and miss issues at any level of baseball and has a quick and compact swing that produces plenty of bat speed.

Nope, no extra length there. Bohm’s plate coverage for a guy his height is exquisite. He does struggle a bit against pitches up in the zone, but has the discipline to lay off those pitches and wait for a pitch middle or low in the zone where he absolutely demolishes pitches. 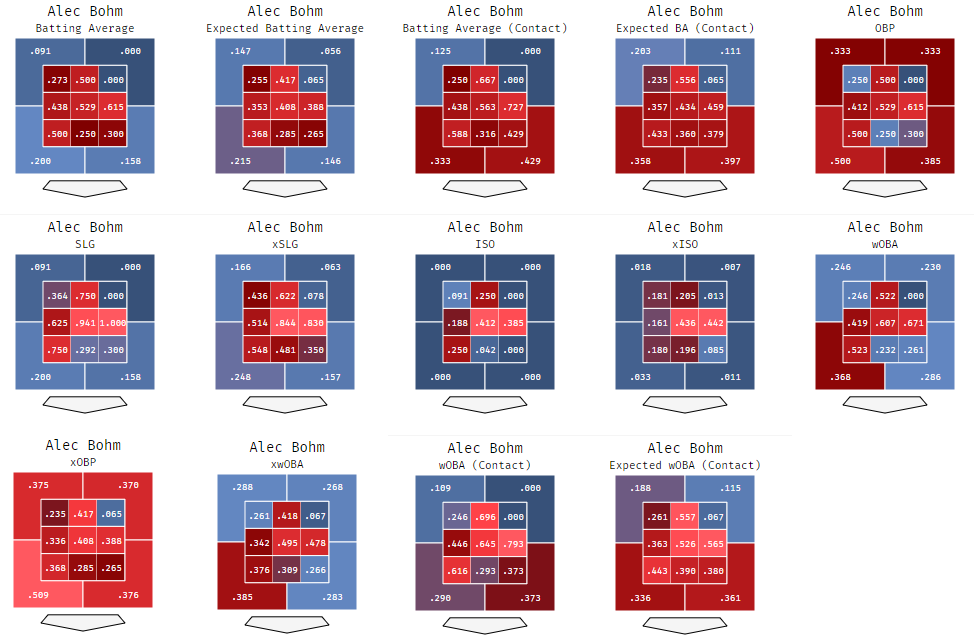 Really, it’s mostly up and away or up and in that Bohm has difficulties with, which isn’t all that uncommon for hitters.

So, we’ve covered that Bohm doesn’t have many zones he’s weak in, but what about against certain pitch types? Nope, no real struggles there either.

Bohm mashed fastballs and breaking balls while holding a respectable .261 average against offspeed pitches. The one thing we can take away here is that Bohm didn’t hit for much power against offspeed pitches, but it didn’t make too much of an impact as he only saw offspeed offerings 9.7% of the time. This is something I noticed during my live looks and in video analysis as well. Bohm does a great job remaining balanced at the plate and rarely chases offspeed junk outside the zone. And I hate to keep bringing his height into this, but this type of balance at the plate and lack of a “struggle pitch type” is rare for a 6’5 slugger.

While Alec Bohm’s contact skills and plate approach were very apparent through the minors and in his rookie season, his power did lag behind a bit. In 180 plate appearances, Bohm slugged only four home runs with a .144 ISO despite all the nice-looking statcast data you saw above. There’s an easy explanation for this. Through all of Bohm’s success, he produced a 53.2% groundball rate, 25.4% flyball rate, and a 4.8-degree launch angle which is well below league average. This isn’t anything new for Bohm either who never recorded a FB rate above 40% at any level in the minors.

I’m sure some are tired of hearing the words “launch angle” but that’s what is currently holding Bohm back from fully unlocking his plus raw power. In addition, Bohm has employed more of an all-fields approach rather than trying to drive balls to his pull side. The highest pull rate Bohm has had at any level of professional baseball is 37.7% in High-A and that rate dropped to 29.4% during his rookie season with the Phillies. In fact, Bohm had more hits to centerfield than he did to right or left. That’s a great sign for his timing at the plate, but does cap his power output a bit as the centerfield wall is the farthest from home plate, of course, usually 50ish feet further than down each foul line.

If Bohm can drive the ball in the air more consistently, he absolutely has the raw power upside to push or exceed 30-homers on an annual basis. At the very least, we should see him settle in as a 25-homer hitter more often than not.

If the above sounds familiar, it’s because I’m basically describing early-career Freddie Freeman. When Freeman was coming up through the Braves farm system, he was a similarly ranked prospect as Alec Bohm has been the last two years. Neither were considered elite top-10 prospects, but both could be found in many top-25’s or at least in the top-50.

That’s about as close as you can get. Bohm and Freeman posted the exact same slugging and were only three points apart in OBP. They also had nearly the exact same power pace too. Neither one of those power paces jump through the screen and smack you on the forehead, but as I mentioned above, there’s reason to believe Bohm’s power can take a step forward just as Freeman’s has throughout his all-star career. After averaging 19 HR per 162 games in the minors, Freeman averaged 22.4 HR/162 through his first five Major League seasons before boosting that to 33.6 HR/162 over his last five seasons. Bohm has the power potential to follow that trajectory.

I’m not saying Bohm will wind up as an MVP candidate down the road like Freeman was in 2020, but the similarities are very noticeable.

At this point, you probably know most of what I’m going to say here. I mean, why would I write this article and give it the title I did if I thought Alec Bohm WASN’T going to become a star? That’d just be silly. In my latest top-500 dynasty rankings, Bohm was my #106 player, up 29 spots from my early-September update. The fact that he’s already pushing top-100 overall status after his rookie season without providing any speed show how confident I am in his ability to be a strong contributor in the other four categories. Bohm has the upside to hit .290+ with an OBP north of .360 and 25+ home runs annually while posting solid R and RBI totals hitting in the middle of a good Phillies lineup that includes Bryce Harper and Rhys Hoskins.

For 2021, Bohm is one of my favorite corner infield targets. The third base position gets rather boring in a hurry, so targeting Bohm in the middle rounds is something you’ll see me doing a ton in 2021 drafts. Sure, there’s always some risk targeting a player with this little MLB experience in the first 150 picks or so, but Bohm has one of the higher floors you’ll see from a prospect due to his contact skills and approach at the plate. Assuming we have a full season next year (GO AWAY CORONA), I’m expecting Bohm to be somewhere in the .290/90/20/90 range at season’s end.