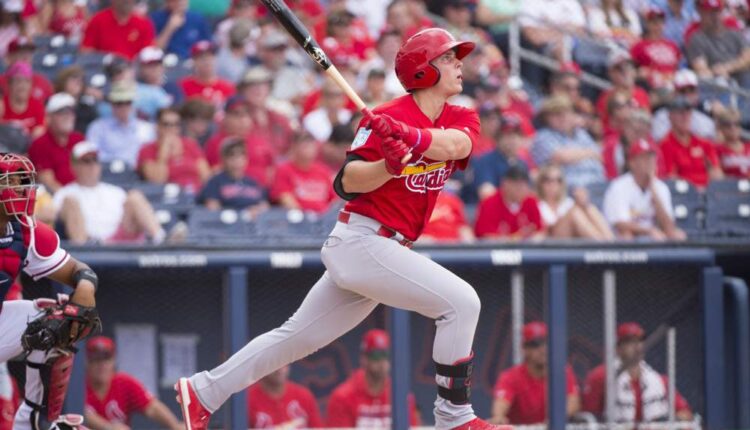 Welcome to our 2022 team top prospect rankings series. Eric Cross and Chris Clegg will go through all 30 Major League organizations, continuing today with their St. Louis Cardinals Top Prospects for dynasty leagues. In each installment of this series, you’ll find the top-20 rankings from both Eric Cross (AVG) and Chris Clegg (OBP) along with one prospect each that they’re targeting heavily in dynasty leagues right now. Hopefully, these rankings will help you in your dynasty leagues, and maybe give you some new trade targets to consider.

One name I’m particularly intrigued by in this St. Louis system is Joshua Baez. A prep outfielder from Massachusetts taken in the second round last summer, Baez is a 6’4, 220-pound slugger that fits your standard power-hitting corner outfield role. Following the 2021 draft, Baez played in 23 games with the Cardinals’ FCL affiliate and cranked a pair of home runs with 14 walks in 95 plate appearances. He also struck out 28 times, which is the part of his profile that needs refinement.

The power is potentially double-plus with 30-homer upside down the road, but Baez’s contact skills and swing and miss tendencies are in question. If Baez is a 50-grade hitter, or maybe even 45-grade, he could settle in as a .250/30 type down the road as a starting corner outfielder. But he’s a long way from reaching that level and will need to improve his hit tool over the next few years as he climbs the latter in St Louis’ organization.

No one should be surprised that I am writing up Won-Bin Cho here. The man is still flying under the radar in dynasty leagues and I don’t see why. The lack of familiarity and Cho being more of a pop-up name are the only reasons I can come up with. Cho is a ballplayer and a good one at that. He was not originally going to sign in the 2021-2022 International class but decided late in the process to sign. The Cardinals scooped him up and got a good one.

Cho is just 18 years old and from South Korea, but he has plenty of game film and has played travel ball in the states before signing. He has more game film than any other international signee from this year’s class which caused me to dig in. Cho has good power and an easy swing. His swing generates natural loft and loud pop off the bat. He controls the zone very well with the bat. He is 6’3/200 pounds, giving him room to grow and add more power. Cho has good instincts on the base paths and a knack to steal.

Geoff Pontes is one of the only people I know that has seen him live. The returns from Geoff were very positive which was confirmation of what I had seen through film. I still see Won-Bin Cho as a solid buy in dynasty leagues. It seems like very few people are talking about him. You can acquire him very cheaply in dynasty leagues, so I recommend doing so before he gets in full-season ball and sees his stock improve.