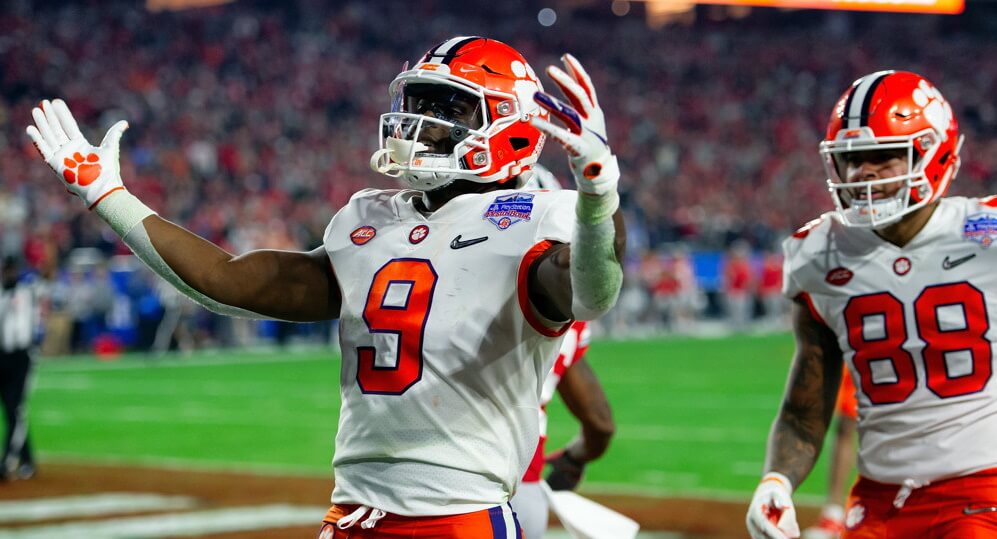 Football season may seem like it will never get here, but it’s gonna happen! And you’ll be ready with composite Devy Fantasy Football Rankings from John Laub and some of the best analysts in the industry.

My parents loved science fiction, and our family watched nearly every Sci-Fi film of the Seventies and Eighties. As a teenager, I remember watching Logan’s Run, which explored a Dystopian future where citizens over thirty underwent the Carrousel ceremonial to be reincarnated. It changed my perspective and elucidated the danger of a state-controlled life. Looking back, my parents promoted creative thinking and free will without ever implicitly stating it.

Growing up in an era before cable television, the internet, and live streaming, I entertained myself reading comic books, playing whiffle ball in the backyard with my brother and finding new ways to get in trouble in the neighborhood. I learned how to be creative and clever: Now, I employ those ingrained skills in the classroom as a teacher and in my writing as a fantasy football diehard.

While my district closed schools for the foreseeable future, I have so many endeavors to keep myself busy while self-quarantined in the house. One of the first that popped into my mind was to organize a Devy All-American team in order to assess players for the upcoming season. I asked three distinguished football fanatics to join me in providing player rankings, and I constructed a composite rating at all the positions afterward. My Draft profiles always begin with Devy rankings.

Ready to make the jump into Devy Fantasy Football? Head over to Fantrax and join a league today!

What are Devy leagues?

It is a Dynasty league on steroids. It is a wonderful fantasy football format that allows diehards to scout, project and manage prospects from high school to the pros. Once a year, owners in Devy Leagues draft college stars and place the prospects on their farm teams.

When the prospect leaves campus and declares for the NFL Draft, the player will be promoted to the active roster of the fantasy manager. Many leagues limit the future professionals to one or two players. Therefore, the annual rookie draft remains fertile.

Owners in Devy Leagues are always looking for a competitive advantage, and my teammates and I have identified college players who should be considered for rosters. These are not general College Fantasy Football rankings for 2020 or NFL rookie ratings for 2021 but underclassmen to target for Devy owners. The rankings will surely transform as the season unfolds and players exceed expectations, disappoint or suffer injuries.

If you are a Devy player, College Fantasy Football Fanatic, Draftnik or Football Diehard, I hope you enjoy the rankings as much as we did while researching the players. It is a delightful hobby–and life–for a gridiron scholar like myself.

Why do you enjoy playing in a Devy league?

“I use Devy as the foundation of my fantasy football fandom. I revere both college and NFL alternative-reality leagues, and Devy ones provide me an opportunity to study players well in advance of becoming professionals. It forces me to know all of the college depth charts across the nation in order to improve my fantasy rosters. Also, I have a detailed picture of the prospect well before I begin writing my Scholar’s Study Sheets: NFL Draft Prospects every January. I recommend that everyone tries a Devy league to become more knowledgeable and informed on NFL Draft prospects.”

“I personally enjoy watching college football a lot and my passion is scouting players for the NFL Draft. That’s the main reason why I started The Dynasty Draft Room. I enjoy watching young prospects develop into NFL stars and trying to find what player will have a lot of success at the next level. Playing Devy gives you that “next level’’ of experience in the fantasy football world. It allows you to really watch the younger talent and try to find it before anyone else does.”

“I have always followed College Football and been playing fantasy football for many years, so being able to bring the two together is the perfect match. It conveys a different level of strategy and forces us to dive quite a bit deeper into the potential of a player well before they declare for the NFL Draft if that time ever comes to fruition.”

“Hands down my favorite part is being able to dig deeper into draft classes. You have to actually hunker down and do the research because if you don’t, you will be left behind. I love finding the little-known guy that breaks out before one of my fellow league members.”

Identify the quarterback who you are most interested in acquiring on Devy rosters this year:

“It is Sam Howell for me: 3,641 yards, 38 touchdowns, and only seven picks as a freshman. He has some really nice weapons in Dazz Newsome and Dyami Brown, Jr., who is my big sleeper for 2020. And incoming freshman WR Josh Downs is an exciting player to watch.”

Who is your top Devy asset at this point in time?

“Without question, I am acquiring as many shares as possible of RB Journey Brown, Penn State. In 2017, Brown redshirted and last season shared snaps and carries in the backfield until November. Finally, the sophomore earned the majority of touches, rambling for over 100 yards in four of the final five games while scoring 10 touchdowns. At 5-foot-11 and 207 pounds, Brown is a superb athlete who brings intensity, explosiveness, dedication, and commitment to the field every day. The redshirt sophomore excelled as a sprinter in high school, breaking a 32-year old state record in the 100-meters in 2017. He is now turning the track speed into football stardom. Now is the time to acquire the Nittany Lions’ star in Devy leagues.”

“If this is a one quarterback league we are talking about then WR Ja’Marr Chase, LSU is my top Devy asset. He really showed out this year in their National Championship run and has put himself at the top of my board. If we are talking about a SuperFlex or a 2-quarterback league then I think it has to be QB Trevor Lawrence, Clemson. Ever since he was a freshman, he has been tearing up the college scene. I expect him to be the first-overall pick in a lot of fantasy leagues and in the NFL Draft next year if he chooses to come out.”

“My top Devy asset at the moment is QB Kyle Trask, Florida. He showed serious flashes last season that leads me to believe he can take that leap to the next level this upcoming campaign. I believe that Trask will be one of the most talked-about signal callers at the end of this upcoming crusade and through the entire draft process.”

“Travis Etienne, Clemson: Running backs are scary these days to own and projecting how long they will be around is hard but Etienne is a stud. He is capable of being a three-down back who has the ability to line up anywhere on the football field. He is one of the only guys I foresee that landing spot does not matter.”

Identify the running back who you are most interested in acquiring on Devy rosters this year:

“I’m taking Journey Brown. Dude runs a 4.29 forty and trains with Saquon Barkley in the offseason. Teague’s Achilles injury scares me. White has two ACL tears and looked like he lost some explosion last year. Hall is a close second though.”

Who is your favorite under-the-radar Devy prospect in the Class of 2021?

“If I am going to scream from the rooftops for one player on Devy rosters, QB Sam Ehlinger, Texas is my dude. At 6-foot-3 and 230 pounds, the Senior has flown under-the-radar as a draft prospect. Over the past two seasons, he has passed for 6,955 yards, rushed for 1,145 and totaled 80 touchdowns. Currently on the William Hill Sportsbooks, Ehlinger is 20-1 to capture the Heisman Trophy and he will likely garner national media attention over the summer. A dual-threat playmaker, he is the idyllic modern NFL quarterback and will skyrocket up draft rankings next fall.”

“My guy that I’m high on may not be totally under the radar but won’t be talked about high enough is WR Tylan Wallace, Oklahoma State. He’s someone I pounded the table for to come out in the 2020 draft, but unfortunately, tore his ACL towards the end of the college season. He’s currently my No. 3 WR in my early rankings for the 2021 NFL Draft. He’s a phenomenal route runner and a guy that can make the tough catch. He reminds me a lot of Stefon Diggs, and he emulates his game in a lot of ways.”

“My favorite under-the-radar Devy Prospect from the Class of 2021 is QB Brady White, Memphis. He had a career year last season and has two returning starters in RB Kenneth Gainwell and WR Damonte Coxie, both of whom played a huge role in the offense. I expect Brady, and the entire Memphis team, to have a huge season in 2021.”

“Trevon Grimes, Florida: This is a kid everyone will be talking about at the end of the season. Kyle Trask is a phenomenal quarterback who will find Grimes all over the field, especially in the red-zone. He is a big body wide receiver (6-foot-5) who has the ability to use his long strides to beat corners deep consistently.”

Identify the wide receiver who you are most interested in acquiring on Devy rosters this year:

“This one is tough: I’d go Amon-Ra St. Brown. He’s coming off hernia surgery but should be fine for the season. Pittman is off to the NFL so Brown should really acquire the majority of the targets. If I’m in a rebuild, Wilson would have to be considered. “

“Agreed (with Brandon Lejeune). I continue to feel like I need to be higher on T. Wallace, but St. Brown or G. Wilson for me.”