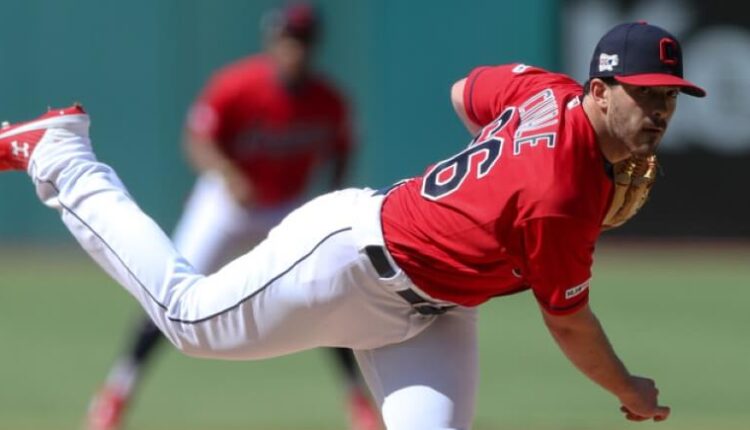 Welcome back to another article! I hope everyone had a GREAT holiday of whatever you celebrate. This last week is a great reminder of what to be thankful for in a tough year of our lives, being around our loved ones and creating great memories. Now that the holidays are over, we can begin to turn the page on 2020 and look forward to a MUCH better 2021 that will hopefully have many more baseball games. While assessing players for 2021, it’s important to use some of the data from the 2020 season. In a season in which a global pandemic was occurring, and we only had 60 games of data, it is incredibly hard to make assessments about players and their performances, and that includes Aaron Civale, who I’ll be looking at in this article.

This offseason, I’ll be doing a series of articles looking at what went right, what went wrong, and the overall 2021 outlook for certain players. I can only take into account the data that has been given and use that to best assess what to expect from each player in 2021. This should be fun! Let’s dive into our next player in this series: Aaron Civale.

What Went Right for Aaron Civale in 2020

If you’ve looked into Aaron Civale’s profile, you know that he’s been able to limit his walks and show great command. In his short two seasons in the Majors, Civale was able to lower his already great walk percentage from 7 percent to barely over 5 percent in 2020. A big reason for this was his astonishing increase in throwing pitches in the zone.

Civale threw 358 of his 863 pitches in the zone in 2019 or 41% of his total pitches. He jumped that number to 587 of 1201 in 2020 or 48%. That 7% jump was the highest in all of baseball. Breaking it down by actual pitches, this was a 229 pitch increase. The only other pitcher to have an increase in the number of their pitches thrown in the strike zone in 2020 was Tyler Glasnow with 30. That is not a misprint. Civale threw 199 more pitches in the zone than the next closest pitcher in baseball last year. There will be more on this stat later.

Going along with his great command, Civale was able to increase his rate of getting batters to whiff. Civale increased his K% nearly 2%, his K/9 from barely over 7 to nearly 8.5/9, and upped his whiff percentages on 3 of his pitches. A big reason for this is Civale seeming to figure out the formula that works best for his arsenal. He misses bats having his 72 percentile spinning fastball up in the zone paired with his heavy groundball sinker and effective curve. A great approach going forward.

Civale features four pitches that profile as above-average. Most pitchers in baseball would be happy with two let alone four. That’s what makes Aaron Civale special, as well as considering the team he plays for and how they develop pitchers. Now, none of these said pitches are deemed elite by any stretch, but he’s been able to make them work for him so far.

Aaron Civale uses six pitches. Yes, six. Now he has mixed them to varying degrees between his rookie season and this year.  In both his rookie and 2020 campaign, he used his sinker, cutter, and curve combination nearly 60% of the time. Those are part of his primary arsenal. Civale does a nice job of filling in the rest to keep the hitters honest with his slider, change-up, and once in a blue moon, a four-seamer.

There are only a handful of pitchers in baseball that mix pitches like Civale. When you have three pitches that come out of his hand between 20% and 30% of the time, to go along with two that are both nearly 10% of the time, it creates a bigger guessing game for a hitter and does not allow them to sit on one particular pitch. This only really works if a pitcher isn’t throwing a piece of “basura” and calling it a pitch in their arsenal. Civale has truly mastered the art of pitching approach, and his mix of sinker, cutter, change, curve, and the slider is a great one.

A lot of times as analysts, we can tell if a pitcher was deemed “lucky” or “unlucky.” It’s not always foolproof but the great analytics at our disposal now make this a lot more possible than years ago. Aaron Civale is a great case for someone who could have a better 2021.

We start with a stat that many are familiar with and that is BABIP (batting average of balls in play). Civale had the highest BABIP he’s had at ANY level since 2017 in A ball at .333. For comparison, in 2019 across AAA and the Majors, it was .296 and .250 respectfully. Judging by his track record, this seems more like an outlier and I would expect in a full season for this BABIP to regress some, reducing his ERA.

Speaking of ERA, Civale’s expected ERA was 35 points lower than his normal 2020 ERA. The BABIP above has something to do with that but also showed strongly in other advanced run metrics with a 4.03 FIP (fielding-independent pitching) and 3.92 xFIP. The positive changes were there with an increasing groundball rate, decreasing fly-ball rate while maintaining similar weak contact from 2019.

Regression on his Sinker

Aaron Civale throws six pitches as mentioned above, but he uses his sinker the most. Civale used his sinker a lot more in 2019 but brought it to nearly an identical amount as his second-most used pitch, his cutter in 2020. When looking at the decrease in usage leading to decreased effectiveness, it does not seem to make sense. The problems with Civale’s sinker and his full arsenal go beyond that.

Civale had problems controlling his sinker, which for someone who pitches the way he does, is huge. In the case of a lot of his earlier outings, his sinkers were coming back into the zone and riding into the hitters. With the sinker not staying in the lane, the hitters were able to put the barrel on that pitch more consistently. Hence the huge increase in Civale’s overall barrel percentage this year. The overall run value on the pitch went down 7 (his biggest drop on any pitch).

With his sinker lacking to be effective, it carried over into the rest of his arsenal. His curve lacked the same vertical snap of last season, dropping from 67.7 inches to 63.9 inches. It may not seem like a lot but 4 inches is huge for that pitch dropping off the table.

The other big pitch he used a lot in the cutter, also regressed. The side-to-side movement of his cutter lacked, going from 5.5 inches in 2019 to 5.1 inches in 2020. The “cut” in this pitch can be spicy when it’s on but it was rarely the case with this drop in movement and became a lot more hittable.

When Civale was hit in 2020, it was generally a lot harder than 2019.  Civale allowed a 5.5% increase in overall sweet spot percentage, a small jump in hard-hit rate, and nearly a 100 point increase in his xSLG. His barrel rate at 6.7% wasn’t horrible as it was right around the middle of the pack, but it was a big step back from his elite 2.4% last season. This actually carried over to a lot of his expected stats like his xWOBA, xSLG, xERA as they all suffered from this harder contact.

Missing the “It” Pitch

While Aaron Civale has a lot of above-average pitches, he does not have one elite pitch. When looking at Civale’s arsenal, he does not pack a blazing fastball, an amazing 12-6 curve, or a wipeout slider. A lot of pitchers that you see succeed have that one pitch that can get hitters out on a consistent basis when they’re ahead in counts.

Civale tops out at around 92 mph but utilizes his mix well to keep hitters off-balance. However, as we saw mentioned above Civale hangs around the zone a lot. If he is not commanding his pitches to go where they want, he does not have the luxury of a pitch that disappears out of the zone like these huge strikeout guys. Civale’s success is pounding the zone with his mix of pitches and controlling where they want them to go.

When Civale stays around the plate and misses, the result is what was seen a lot of 2020. The lack of putting batters away consistently and having them swing outside the zone can lead to a lot of zone contact. In 2020’s case, Civale missed more often than 2019 and he was lit up like a Christmas tree in some outings.  While Civale may never develop an elite pitch, his control will need to stay sharp, or else he’ll get hit hard.

Outlook for Aaron Civale in 2021

Civale assumed the Tribe’s No. 4 starter role behind Shane Beiber, Zach Plesac, and Carlos Carrasco when Mike Clevinger was traded away at the trade deadline. There’s something in already knowing that a player your drafting safely has a spot in a team’s rotation or batting lineup.  It seems a lot of his struggles this season can be easily correctable in 2021.

A glamour pitcher is not Aaron Civale. His outings are not the top of Sportscenter’s highlights. Nothing in his pitch mix is flashy but is really good at hiding his pitches and constantly mixing up pitches. He seems to have a big grasp on the mental part of the game, knowing when to throw which pitch and getting the advantage in a lot of at-bats. He does with great control of one of the biggest arsenals in the league to boot.

According to NFBC ADP, Aaron Civale is the 67th pitcher off the board at roughly pick 188. This is behind guys like Marco Gonzales, Dustin May, and his teammate Triston Mckenzie. I think Civale is a steal at this pick because of his steady floor he seems to bring at this range as what’s most likely an SP4 or SP5. This does not even count for the potential upside he can bring working with arguably the best team for developing pitching in baseball, his strategic brain, and his four above-average offerings. I will be signing up for every bit of Aaron Civale every day and twice on Sundays. You should be too.