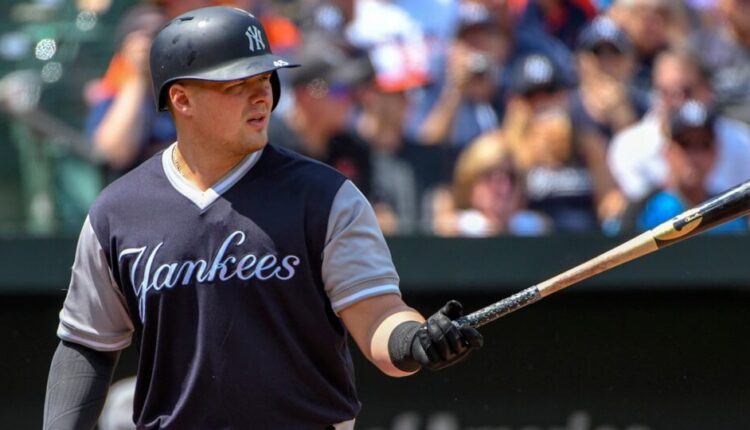 After a crazy 2020 season, it could be time to buy players who underperformed and sell guys who may be at peak value. Last week we looked at “Corner Infielders to Buy Low.” Today, we will dive in on several corner infielders that you should consider selling high in your dynasty Fantasy Baseball league. The first and third base positions offer many players to buy-low on, but there are several guys you can get a nice return on.

The White Sox first basemen, Jose Abreu has been the model of consistency since debuting in 2014. In six full seasons through 2019, Abreu averaged 30 home runs and over 100 RBI per season with a .293/.349/.513 slash line. Abreu hit at least 30 or more home runs with a .290 or better batting average in four of those six seasons.

In 2020, Abreu exploded and put up a career season on his way to earning American League MVP honors. Abreu tied his career-high with a .317 batting average and swatted 19 home runs while driving in 60 runs in 60 games. No hitter had more RBI, and only Luke Voit had more home runs last season.

So the question remains; if Abreu has been so good consistently throughout his career, why should I sell high? First, Abreu will turn 34 years old in January. While 34 is not that old, his value is bound to decline soon. In dynasty leagues, Abreu might be at his highest value since 2017. If you can move him to someone looking to win now, it could pay off, and you could find yourself a younger piece.

Jose Abreu’s statcast data was off the charts as he posted a career-high barrel rate, average exit velocity, and hard-hit rate. Again, those numbers look good for future success. On the flip side, Abreu struck out 22.5 percent of the time, which was the highest of his career. This largely came from a swinging strike rate of 13.8 percent, which well above the league average. One of the main swing and miss issues came against both breaking and offspeed pitches.

While things do look good in Abreu’s profile, it would be tough to sustain the pace he carried last season. I expect a solid 2021 season, but as I mentioned, now is the highest his dynasty value has been in some time. Sell now and get peak value while you can.

Your 2020 MLB home run leader Luke Voit is a prime sell-high candidate for dynasty Fantasy Baseball leagues. It is hard not to like Luke Voit, who lost weight and played through an injury for the team’s benefit. With many of the Yankees being out with injury, Voit put the team on his back, swatting 22 home runs, driving in 52 runs, and slashing .277/.338/.610.

Voit also saw his strikeout rate drop dramatically from nearly 28 percent to 23 percent in 2020. Interestingly, he lowered his strikeout rate while increasing his chase rate by nearly seven percent. His contact rates increased dramatically overall, which is surprising given the chase rates and swing and miss. Surprisingly, pitchers have not caught on to Voit’s struggles with offspeed pitches. His 2019 whiff rates on breaking balls was 47.2 percent, and on offspeed pitches, it was 42.6 percent. Those numbers did drop in 2020 but were a rough 36.9 and 39.7 percent, respectively. Voit mashes fastballs yet saw them at a 52.5 percent rate in both 2019 and 2020. It seems like more pitchers would try to exploit him on breaking and offspeed pitches.

I would also expect some regression in the power department for Voit. He posted an insanely high 34.9 percent home run-to-fly ball rate. His average exit velocity was also pretty low at a mere 88.9 miles-per-hour. Fortunately, he did hit the ball harder when he hit in the air, at 95.9 mph. Voit’s hard-hit rate was also a pedestrian 40 percent, and his overall whiff rate shows concerns that his strikeout rate could jump in 2021.

I like Luke Voit, but his Fantasy Baseball value has been inflated significantly. The first base position is shallow, so someone in your dynasty league may be willing to overpay for Voit. Injuries are also a concern for him. In 2019, Voit dealt with both an abdominal strain and a groin sports hernia. Voit also spent a lot of the 2020 season dealing with plantar fasciitis. You can see in Derek Rhoads great injury timeline tool below the injuries and how they affected his max exit velocities by season.

Like Abreu, Voit’s value is the highest it has ever been in dynasty Fantasy Baseball leagues, so now is the time to cash in and sell high.

It is hard for me to put Manny Machado in the sell high category because I love what he brings to the table for Fantasy purposes. I also acquired him in my home dynasty league earlier this offseason. The reality is that Machado is highly inconsistent when it comes to his play. Machado is a .280 hitter for his career, which is impressive, but let’s look deeper. Since 2016, Machado has posted batting averages of .294, .259, .297, .256, .304. So what will 2021 bring? It seems that the odd years produce a poor batting average. This is likely meaningless but worth noting.

What Machado does bring to the table is consistent power. Since 2015, his lowest season home run total was 32. Between 2015 and 2019, Machado averaged 35 home runs per season. In 2020 Machado was on pace for 43 home runs over a full season. He feels like a safe bet to hit 35 again, moving forward.

Machado is also a lock to play games. I think Fantasy Baseball players often discount players who stay healthy and play every day. Machado is a pro at doing that as he has missed just 17 total games since 2015. If you don’t understand how rare that is, Machado played in 98 percent of the team’s games over that span. If you needed more proof of how good that is, Machado leads all players in games played since 2015.

Like Abreu, everything looks great. Why should you sell high on Machado? First, the speed. Machado stole six bases in 2020, and it may give false hope that he is back to his stolen base ways. Yes, the Padres like to run, but Machado is not a great runner, and the Padres lineup looks like it will be so stacked that Machado will not need to run often to make things happen. He was on pace for 16 in 2020, which he has only eclipsed once in his career. If someone in your dynasty Fantasy Baseball league believes that Machado will steal 15 bases again, they may overvalue him. 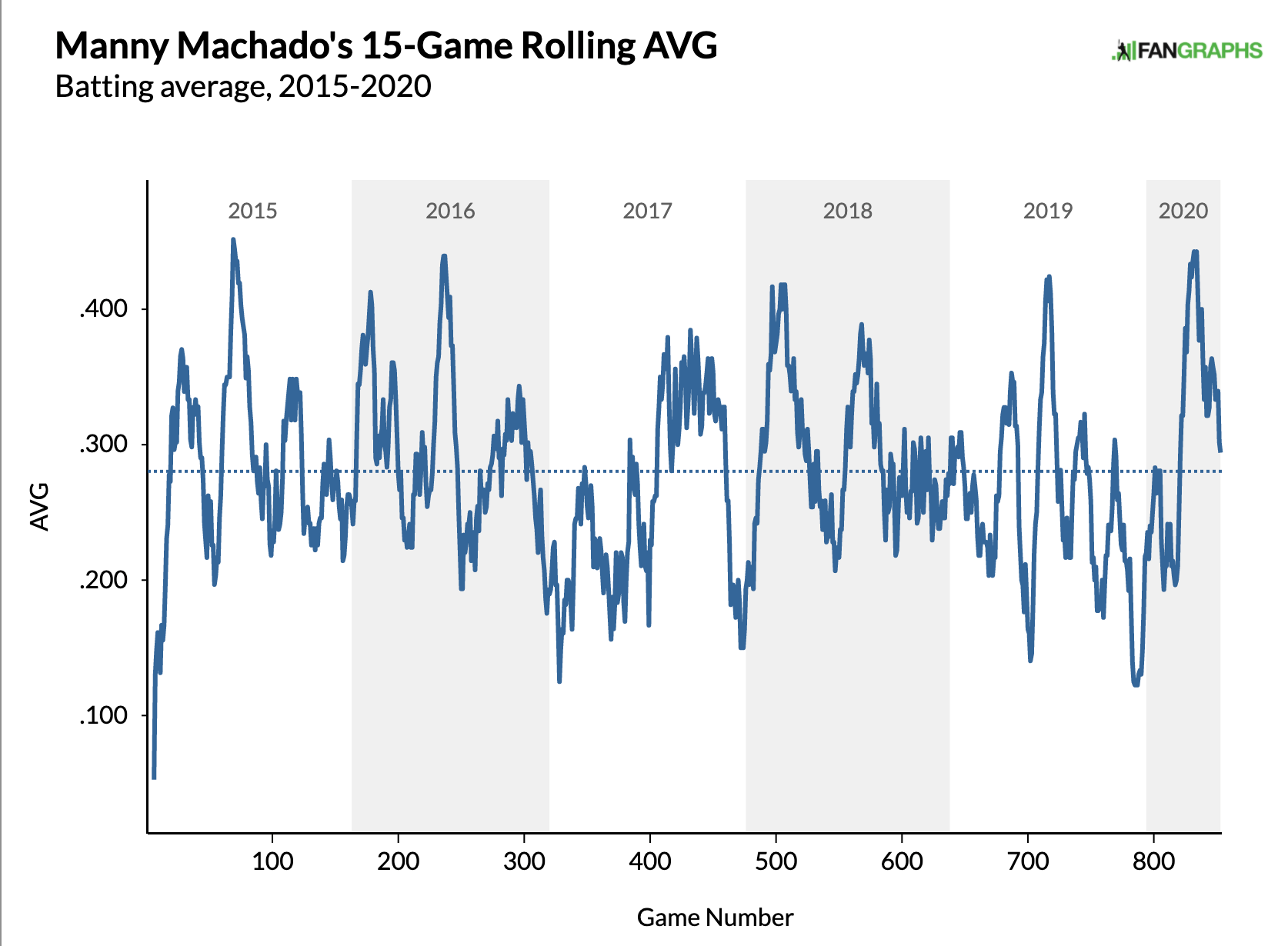 I would also sell high because of the volatility in his batting average. Just take a look at his rolling batting average chart: so many hills and valleys. Don’t get me wrong, I like Manny Machado and think he can be a solid Fantasy asset. But, there is likely someone in your league that overvalues him, and it could create a nice selling opportunity.