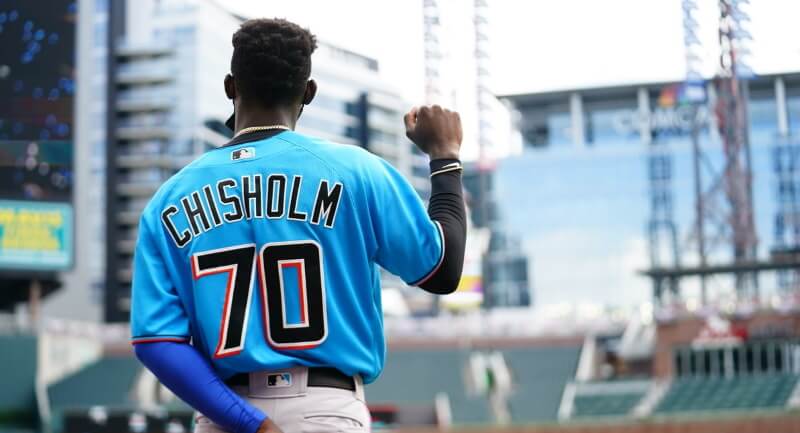 Last week, I introduced the first installment of my rest of season rankings for the 2021 fantasy baseball season. I mentioned that it was far too early to make any sweeping declarations based on a handful of ballgames. We have yet to reach stabilization rates for most metrics, and a good (or bad) game or two this early in the year can really skew our view of a player. In the NFBC Main Event, 42 teams acquired Tyler Naquin last weekend at an average cost of $128 in FAAB. Since Monday they have been rewarded with an empty 1-for-8 and three DNPs. That is not to say that Naquin cannot have value at some point this season. But it is safe to say that his opening week outburst artificially pumped up his value. I believe this week’s effort is a much more likely result from the 29-year old going forward.

However, there are instances where my stance on a player is much different than it was a month ago. Or even a week ago for that matter. Injuries and role changes can alter the fantasy landscape in a hurry. We have already seen plenty of both during the first two weeks of the 2021 season. My rest of season rankings reflect many of these changes. There have also been players who have surprised me to the point where I have changed my mind considerably since my final draft rankings were published back in March. One such player is Jazz Chisholm of the Miami Marlins.

When the season began, I had Jazz Chisholm ranked slightly behind Jon Berti despite word that Chisholm had won the Marlins’ second base job. I thought there was a high probability that he would be exposed and overmatched given everyday playing time. And that still may happen once pitchers adjust. But so far the results have been outstanding for the 23-year-old. Chisholm enters Sunday’s action with a .324/.458/.703 triple-slash line. While regression is certain, there are reasons to be impressed by Miami’s middle infielder.

First and foremost for me is his walk rate which currently sits at 18.8 percent. It is unrealistic to expect such a high number consistently throughout the season. However, if he can keep that figure in the double digits, he should be able to maintain a solid batting average despite his high strikeout rate. Secondly, Chisholm has been flat tattooing the baseball thus far in 2021. People took notice when Chisholm turned a 100 MPH Jacob deGrom fastball into an upper-deck souvenir. But Chisholm has made a habit of making hard contact. Just check out this Statcast page: 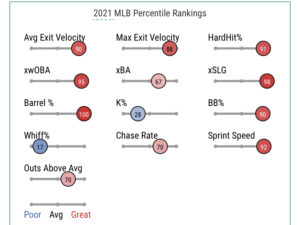 The lack of consistent contact will likely prevent Chisholm from being a .300 hitter anytime soon. He has had a strikeout rate north of 25 percent at every stop in both the Major and Minor Leagues. Having said that, it is hard to come away unimpressed by the rookie’s results in the early going. Throw in a 92nd percentile speed score, and Chisholm has the makings of a fantasy steal (pun intended) for those who hopped on board early. He was successful on 49-of-61 stolen base attempts in the Minors, and can easily steal 20-plus bases if he continues to get on base at a high clip. Chisholm also carries multi-positional eligibility for good measure. I want to see how he reacts to the adjustments that Major League pitchers are sure to make before moving him up another tier, but there is a ton of upside here.

When Cody Bellinger was spiked going down the first base line on April 5, it initially seemed as though he would miss a week or two of action. But after a lack of physical improvement over the past week, an additional scan revealed that the Dodgers star has a hairline fracture in his left fibula. I am not a doctor, and I do not play one on TV or Twitter. So I will defer to our resident injury expert:

*WTH it take so long to get a damn xray!!

Here is where compiling the rest of season rankings gets tricky. Despite the doom and gloom of the former National League MVP likely missing anywhere from 20 to 40 percent of the regular season, you are not dropping him in fantasy. So I still have him ranked as someone who should be held in every league. At the same time, we cannot say for certain when he will return. We also must consider that the Dodgers have the luxury of being uber-conservative with how they use him when he does come back. They are already 13-2 and look like a superteam even without Bellinger in the lineup. I would not be surprised to see him sit once or twice a week for general rest and maintenance after his return.

Unless we get worse news on Bellinger’s health, this is the lowest I will have him ranked this year. As he progresses towards his return, I will inch him up the ladder so to speak. However, there is a chance that I never move him up to pre-injury levels. In my final draft rankings, I had Bellinger as the 13th-highest ranked hitter overall. He may be more like a top 20 or 25 hitter for me when he comes back. Time will tell. I would not go selling for pennies on the dollar, but I would adjust expectations a bit the rest of the way.

Of course, there are no rankings more volatile than reliever rankings. In most cases, we should just set fire to bullpen rankings we created just a few short weeks ago. When I went through the bullpens to try to piece together these rankings, I counted no less than 10 teams that appear (keyword) to have a different closer than I had projected them for even a month ago. I am considerably higher than the consensus on players including Emmanuel Clase, Yimi Garcia, Lucas Sims, Kendall Graveman, and Lou Trivino. Based on current usage, those players look like current closers for their respective teams. But other relievers on some of these teams still have value as well. For example, I would not go panic-dumping James Karinchak, Rafael Montero, or Jake Diekman.

It is highly probable that many of the relievers listed in my rest of season rankings bounce all over the place for the next couple of months. And just wait until we get closer to the trade deadline. Then the true chaos will begin. Saving some extra dollars for free agent bids and having added roster flexibility is going to be of paramount importance for teams that fall behind in saves. I cannot pretend to know how many of these bullpens will shake out for the rest of the year, so make sure to keep up with the ever-changing bullpen landscape. For the latest updates on each team’s bullpen depth chart, check out Dave Swan’s column here.