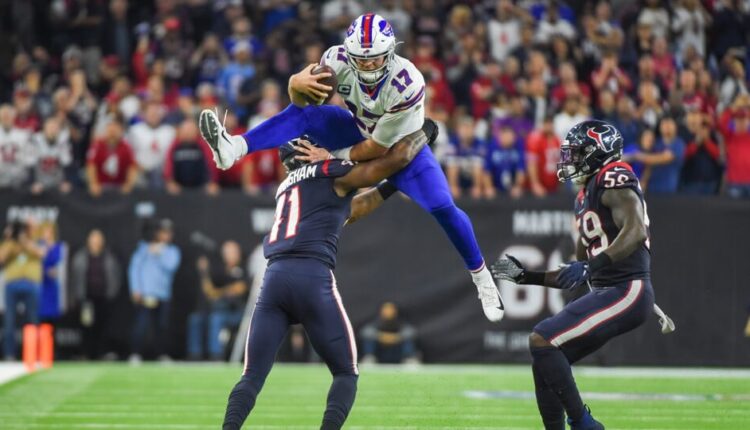 Welcome back! Was in the spring… and spring became the summer… well it’s pretty much summertime which means, Fantasy Football draft prep time! As the weeks go along, we at Fantrax will continue to break out our Consensus Fantasy Football Rankings for standard scoring formats followed shortly by PPR scoring. We’ll kick things off today with our 2021 Quarterback Rankings.

Our fantasy football rankings will combine the expertise of a few of our Fantasy Football analysts here at Fantrax! It’s still early so the quarterback rankings are subject to change. Will the Bears name Justin Fields their starter in camp? Can Trey Lance do the same in San Francisco? Still many questions but are analysts are ready to get the draft prep going with a bang! Enjoy our fantasy football rankings and continue to check out our website for all the info you’ll need to win your leagues in 2021.

Below are the analysts that will be breaking down our Quarterback Rankings over the next couple months. For the other skill positions, we may have one or two more involved dealing with PPR and Standard Scoring formats. In the meantime, we have three analysts from you to draw from. We’ve included their initials so that you know who is who in the rankings table and also our Twitter handles so you can give us a follow and let us know what you think of our rankings.

The top-11 fantasy point scorers last season were all from the Quarterback position so it’s crucial to make sure you cement yourself with a top talent in your drafts. This season the QB position seems to be as deep as it has ever been with a new wave of QBs ready to take center stage. Our consensus analysts Jordan Daniel (JD), Justin Johnson (JJ), and I (MO) will break down our strategies of when to draft QB’s in upcoming fantasy drafts.

JD – It’s easy to tell yourself “wait on a quarterback” until you’re staring at Josh Allen or Kyler Murray in the early rounds. In 2020, the difference between the No. 9 QB and the No. 3 QB was 3.1 PTS/G. Drafting an RB or WR in those early rounds provides much more value for your team. Over the past two seasons, 8 of the top 10 quarterbacks rushed for over 200 yards. Find yourself a late-round quarterback with rushing ability and a top 10 finish is certainly in play. When in doubt, you can’t go wrong looking at teams with a great offense and terrible defense.

JJ – Quarterback is all about value-based drafting for me. In one quarterback leagues, I will not think of drafting a quarterback until the 5th round. This is where Lamar Jackson, Russell Wilson, Dak Prescott, and Justin Herbert come into consideration. If I fail to get any of the above, I will make sure to draft a high upside quarterback like Joe Burrow or Jalen Hurts. It is then wise to pair them with a second quarterback later in the draft.

MO – I’ll slide in the middle here. I definitely want to make sure I can grab one of the upper-echelon Quarterbacks such as a Lamar Jackson, Kyler Murray, Russell Wilson, Dak Prescott or Justin Herbert. I’ve seen Murray slip into the QB5 range which I think is an absolute must-grab. He averaged 6.2 yards per carry and can throw it for 300 yards and 3 TD’s which Jackson has proven he can’t do through the air. My biggest issue with waiting is every season we know one guy gets a massive steal and bargain. This happens once or twice max. I do not like those odds folks. Tom Brady was also another example of a solid QB last season but poor in head-to-head formats with way too much inconsistency. Fantasy Matchups are way too close these days and your’re not going to win with 9-point efforts. I learned my lesson last season…top-8 for me baby!

Our consensus rankings all have Patrick Mahomes, Josh Allen, Kyler Murray, and Lamar Jackson going in the top-four. You really can’t go wrong with any of these choices. There’s not a whole lot to add to Patrick Mahomes’ amazing resume. He leads all quarterbacks in fantasy games of 20-plus points (30) over the past three seasons so just draft early and enjoy the ride. Josh Allen is the consensus number two, and you can’t go wrong taking the QB1 from last season. I was the lone-wolf ranking Kyler Murray number two. Give me the QB who led all quarterbacks in 2020 in rushing fantasy points. Murray and Lamar Jackson’s rush average of 6+ was higher than any running back from 2020. Giddy up baby

The Next Best Thing

If you miss out on this run there is no need to fret! The next group is ultra-talented, and all can make a run at the top-4 this season. Dak Prescott was on his way there before suffering a gruesome right ankle injury during week 5 against the Giants and has been setback-free this offseason to return to fantasy glory! Russell Wilson has an average finish of QB 4.75 during his past four seasons and is the only QB to throw 30 or more TD passes in four straight seasons. I expect an UNLIMITED Russell Wilson this season and a top-5 finish. Justin Herbert was a rookie sensation topping 20 points in 10 of his 15 starts and makes for a strong choice this season. Finishing off the top-8 is Aaron Rodgers. As long as Rodgers is back by  Week 1 it should be all-systems ago for the 2020 MVP. A fed-up Rodgers can only be good for your fantasy game. Sign me up

Jalen Hurts rushing upside gives him the edge from this next group of Quarterbacks. His 272 rushing yards in four starts was second in NFL history behind Lamar Jackson. Tom Brady continues to defy father time and the talent surrounding him in Tampa makes him a safe choice. Joe Burrow might offer a tad more upside being paired up with college teammate Ja’Marr Chase, but will the sophomore Burrow be able to escape the hits once again in 2021? Reliable Matt Ryan and Matthew Stafford fight for the top-12 and both should be a safe bet to put up solid numbers. I give a slight edge to a rejuvenated Stafford in La-La land.  Stafford averaged the fourth-most fantasy points per game among QBs in 2019 before getting injured and no one throws the ball at least 50 yards in the air like Stafford does. I’m okay with taking him as high as QB9.

Trevor Lawrence is the consensus QB to round out the top-15. Can the rookie join Kyler Murray and Justin Herbert with Rookie QB1 performances? The Jaguars defense should keep Lawrence in passing mode more often than not which makes him a great QB2 target.

Kirk Cousins – Cousins is the consensus 16th ranked QB on the board. Cousins 11th-ranked finish makes the veteran another reliable-like choice in this area of the rankings. The duo of Adam Thielen and Justin Jefferson make Cousins a worth-while pick.

Derek Carr – For some reason, the fantasy community and real football community refuse to believe in Derek Carr. As my QB#16, I’ll probably have him higher in my quarterback rankings than most. Carr finished QB 13 in 2020 and had a top-16 finish in 2019. Yes, the Raiders will run the football, but they did so in 2020 (top 10 in rush att) and Carr still finished in the top-13 while missing a game. Carr is fresh off three-straight 4,000-yard seasons and closed the year with five QB1 scoring weeks over his final seven games. A third straight top-16 finish is coming once again! Knock on wood if you’re with me.

MO – Justin Fields – The Bears finally got their guy in Justin Fields. Fields is a potential breakout candidate to finish inside the top-18 in fantasy and as rookie QB#2. If named the starter for week one as I expect, there should be potential to move-up closer to the #16 spot and maybe even higher. Rushing QB’s remain a cheat code in Fantasy Football and the dual threat of Fields should make him an instant success in fantasy.

Trey Lance – Another dual-threat like Fields but the upside is even higher with Trey Lance in Kyle Shanahan’s offense. Lance rushed for 1,100 yards with 14 touchdowns for North Dakota State last season while adding a 28:0 TD to Interception ratio. Not too shabby if you ask me! The 49ers seem committed to giving Jimmy Garoppolo the first few games at the moment, but Lance is an excellent QB to draft as your back-up and would have to move up some slots in a super-flex league.

Ryan Fitzpatrick – Ryan Fitzpatrick joins his 9th NFL team, but the main plus is it really sounds like ‘Fitzmagic’ will have the keys to the Washington offense and will not be Tua’d this season. Fitz was the QB8 on the season for the first 6-weeks before getting benched in favor of Tua Tagovailoa and will now get Terry McLaurin, Curtis Samuel, Antonio Gibson, and a solid offensive line to turn in one more magical season for grizzly veteran! You could do worse out there…

JD – Jalen Hurts – Last season Jalen Hurts showed a glimpse of what value he can provide to a fantasy team. The Eagles traded up in the draft to snag Devonta Smith, who will line up opposite former injured WR Jalen Reagor, to provide Hurts with all the passing weapons one needs. His rushing ability alone should provide Hurts with great weekly upside.

MO – Baker Mayfield – Baker Mayfield continues to dazzle in the spotlight with “dangerous” interviews but he’s someone I cannot buy into for fantasy. The worse thing for our Quarterback in fantasy is inconsistency.  Mayfield has finished as the QB 20, 28 and 25 in points per game to begin his career. Mayfield only threw three TD passes in a game twice and threw fewer than 30 passes in 9 starts. The opposite of what you want from your Fantasy Quarterback. Stay away.

Tua Tagovailoa – I know it takes time for rookie Quarterbacks to develop but Tua Tagovailoa is still going too high for my liking. Tua cracked 20 points in just two of nine starts. Give me someone more reliable, or a rookie like Trey Lance please.

JD – Daniel Jones –  Jones will start the season having a significant upgrade at the receiver position with the newly acquired Kenny Golladay. He will also get one of the league’s best running backs in Saquon Barkley back from injury, and yet Golladay is a league leader in deep pass receptions, but now joins Jones who was one of the league’s worst deep passers.

MLB DFS Look Ahead: Stacks and Fades for June 4 – June 6