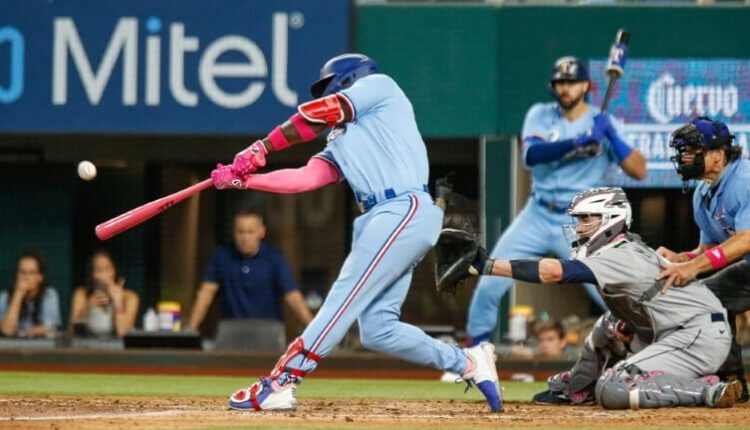 When a player like Adolis García comes along that I haven’t heard of, I tend to hesitate before I decide whether we should buy or sell the early success. The same goes with a proven player that’s struggling, I remind myself to have patience because baseball is a long season. With García, it looks like I missed out because his success through two months looks damn awesome. For Nick Pivetta, I found him intriguing in the offseason and wanted to follow up on some interesting aspects of Pivetta’s profile. That’s typically what we do here – dig into the data and see where it leads us.

Major FOMO here with Adolis García since I didn’t buy into him early in the season. Well, the toolsy outfielder crushes baseballs and keeps producing power and speed. This is a case of yet another former Cardinals outfielder performing well with a new team like Randy Arozarena for the Rays. However, I liked Arozarena a bit more heading into 2020. Can’t say García was even on my radar. In 2019 at Triple-A, García hit 32 home runs and 14 steals with a .253 batting average and a .818 OPS.

Per FanGraphs, García rated as having plus raw power with 70-grade speed yet a 30-grade hit tool. So far in 2021, the raw power and speed are showing up with 16 home runs, 27 runs, 41 RBI, and six steals. Outside of the home runs and steals, the runs plus RBI stand out as quality numbers through two months into the season. Particularly with the RBI, García ranks 5th behind Rafael Devers among qualified hitters. Similar to Cole Irvin last week, García had an NFBC ADP at pick 740, meaning he’s a waiver wire league winner so far. Oh, and all of this production comes with a .285 batting average and .930 OPS heading into Wednesday.

Since Adolis García came somewhat out of nowhere, let’s dig into the underlying metrics to figure out whether we should buy or sell the hot start. García’s 41.2% O-Swing% stands out, meaning he’s chasing almost 11% above the league average of 30.8%. That said, it’s no surprise that García records a high 16.8% swinging-strike rate. García’s 80.4% Z-Contact% and 69.7% Contact% rank below the league average 83.6% Z-Contact% and 75.2% Contact%. Overall, we notice an aggressive approach for García, which sometimes happens with hitters that have a low-grade hit tool. Next, we’ll note the loud contact García makes.

Should We Buy or Sell Adolis García?

The hard-hit metrics don’t lie with the elite batted ball data, as it backs up the raw power grades. One other aspect to note for Adolis García involves his success against fastballs and breaking pitches. Currently, García rocks a .693 SLG and .458 wOBA against fastballs with a .600 SLG and .371 wOBA against breaking pitches. However, García struggles a bit against offspeed pitches with a .222 SLG and .181 wOBA. That said, it’s something to monitor moving forward if opposing pitchers adjust and change their gameplan against García.

Oh what do you know, pitchers threw more breaking and offspeed pitches to García in May when compared to April. Although García didn’t crush breaking pitches as much, he still recorded a .533 slugging percentage in May. Meanwhile, García crushed fastballs in May with a .816 SLG. That tells us pitchers made adjustments yet García adjusted as well from April to May. A good sign so far that helps ease early-season hot streak concerns.

I’m buying into García’s hot start and you should just keep riding the wave unless someone offers you a high-end hitter or pitcher. However, it seems unlikely given his waiver wire status and maybe some other skeptics as I was early on. On the Razzball Player Rater, García ranks as the 6th overall player near Marcus Semien and Rafael Devers. Even if you could package García for an outfielder like Jesse Winker, it’s worth considering though García provides the speed that Winker doesn’t. Sure, there’s the risk of the batting average tanking with the high chase rate and lower contact rate, but as long as it doesn’t fall too low, García should fare just fine.

Pivetta’s vertical release point looks similar to 2020 and in between both 2019 and 2020. It looks like Pivetta’s continuing a bit more of an over-the-top approach instead of a 3/4 type approach. Again with the horizontal release point, it’s a bit closer to his body compared to 2019. I imagine these release points vary game by game and pitch by pitch, and I’m still attempting to learn and understand its relevance.

Through 10 starts, Nick Pivetta has a 3.86 ERA, 1.27 WHIP, 26.3% strikeout rate, and 11.6% walk rate. Pivetta’s .284 BABIP allowed is a bit lower than his career .320 BABIP. Meanwhile, his 71% LOB% is a tad higher than his career 68.7% strand rate. I tend to put players into buckets, and Pivetta falls into the bucket of pitchers that struggles with control and command. Pivetta’s stuff is decent, but he struggles to command the pitches. In a recent starting pitcher rankings update, Eno Sarris has Pivetta with a 94 Command+ and a 111 Stuff+, which falls in line with the previous assumptions of being a pitcher with better stuff than command.

First off, Nick Pivetta’s four-seam velocity is up to 94.8 mph, which is a two mph increase from 2020. That’s a good sign as it’s back to his normal velocity in 2018 and 2019. Meanwhile, the four-seam horizontal movement remains similar. Pivetta’s slider is his whiff pitch though it doesn’t stand out movement-wise. However, Pivetta’s curve has improved vertical movement compared to 2019.

I highlighted the curveball above due to it having 7.2 inches of vertical movement more than the average curveball. Sometimes vertical movement can translate to whiffs, but Pivetta’s curve interestingly doesn’t elicit a ton of swings and misses. Pivetta’s curve elicits a 7.7% swinging-strike rate, 18.4% whiff rate, and .280 wOBA allowed. Both the swinging-strike and whiff rates rate are lower than his four-seamer. Pivetta also lowered the curveball usage to 19.2% and increased the slider usage to 28.1% heading into Wednesday. Interesting changes so far.

After brutal stretches in 2019 and 2020, Nick Pivetta is pitching well to start the 2021 season. Pivetta’s ERA estimators look similar to his ERA with a 3.40 FIP, 4.31 xFIP, and 4.25 SIERA. So far, Pivetta is limiting the home runs with a 6.8% HR/FB rate down from a career rate of 16.7%. That explains the higher xFIP that takes into account a league-average HR/FB rate. I wouldn’t recommend actively buying or selling, but rather recommend holding for now as a streamer in 15-team leagues.

Even if Nick Pivetta hovers around a 4.00 ERA, it’s better than the projections moving forward, let alone better than what many expected. Unfortunately, I drafted, added, and cut Pivetta in several leagues, which means I barely enjoyed the fantasy production outside of a few starts. Cry me a river as Justin Timberlake says. Overall, I like the increased fastball velocity, slight pitch mix change, and similar vertical and horizontal release points. That said, the Red Sox seem to have something brewing, particularly with their pitchers in 2021.