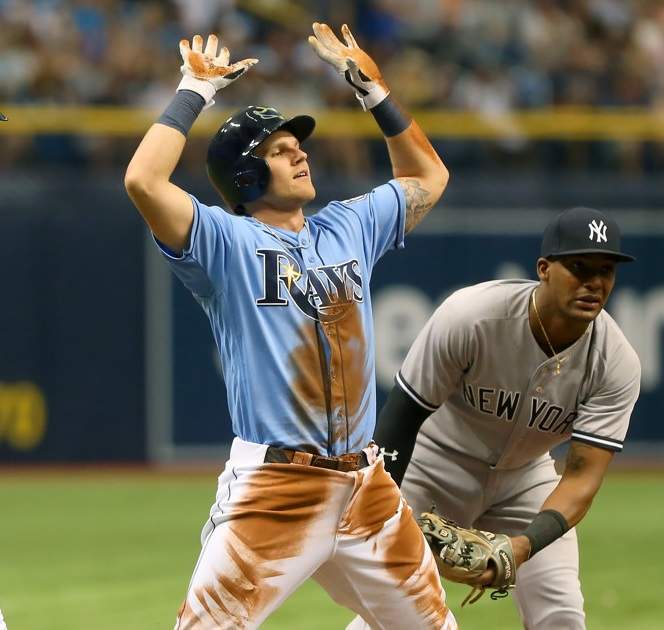 It’s a good thing to get back from a player what you paid for them, right? It seems like an obvious answer, but in this case obvious would be wrong; unless of course, you like finishing in sixth place. If you actually want to win, you have to get back more than you paid for most of your players. Yep, Fantasy Baseball is all about profit. It’s the entire reason for the annual hunt for sleepers. At their core, sleepers are just the best chances we have at making enough profit to win our league. Though sleepers come in many forms, I’ve found over the years that some of the most profitable are post-hype sleepers.

What are Post-Hype Sleepers?

Most post-hype sleepers are ‘failed’ prospects that the majority of fantasy baseball players have given up on or at least aren’t really paying attention to. They’ve went from players in high demand with a lot of hype, to late-round fliers at best. Blake Snell is an example from last year. He struggled to throw strikes in his first few go-rounds at the big league level and even got sent back down in the middle of 2017. He made a few changes and started to figure things out in that second half and was dominant from start to finish in 2018. On the offensive side, Tim Anderson is another pretty good example. He came up with a ton of hype. He was going to steal 40 bases and hit 15 to 20 HRs a year. Anderson never completely fell flat but when he wasn’t an immediate star, fantasy owners turned their backs for the most part. Anderson is still not quite the player many thought he would be, but he’s taken a nice step forward and represents a pretty nice power/speed combo at shortstop. Of course these post-hype sleepers of the past don’t help us now. We’ve got to find this year’s crop! Let’s get to it.

I have to be honest. Some years it’s fairly easy to spot post-hype sleepers. This year there are very few obvious examples and my confidence level is not as high. Still, there are quite a few players that fit the bill of low-risk, high upside, so we’ll give it a go.

Arcia is probably one of the more prototypical post-hype sleepers on my list. He came up as a well-respected prospect, had a nice debut season in 2017, with 15 HRs, 14 SBs, and a solid .277 average. Everything fell apart in 2018. His strikeout rate jumped over five percent to 23.8, his power vanished, and the corresponding loss of playing time took away almost any chance to run. Strikeouts continued to be a problem, but Arcia did turn things around enough in 49 second-half games to hit .290. Arcia lacks the upside of some of the other names on this list, but he’s one of the reasons I’m perfectly willing to wait on shortstop if I don’t get one of the top few options. I’m perfectly fine starting him in an NL-Only league and will use a reserve slot in mixed leagues.

I’m not sure Sano fits the typical profile of a post-hype sleeper. He’s been in an All-Star Game (and Home Run Derby) and has two seasons of 25-plus homers. The hype is all gone after his 2018 season and many fantasy owners seem to be holding a grudge. Sano has always had strikeout issues, but his K-rate ballooned to an astoundingly bad 38.5% last season. His conditioning has been questioned and more injury issues in 2018 haven’t done anything to stop that talk. The power potential is not gone though. Even with his struggles last season 20.6 percent of his fly balls left the yard and with anything close to a full season, he would have approached 30 HRs. There is more competition for at-bats in Minnesota this year, but if Sano can get off to a solid start, the 35-HR potential is worth a late-round grab. Though I won’t reach much further, his current ADP leaves a good amount of room for upside.

Man, how bad does this guy have to be until he makes it to the final couple rounds. I’ve never bought into Buxton and he’s pissed off so many fantasy players I thought he’d be buried forever in the reserve round ADPs. Yet here he is still with a 16th-round ADP. Just a little more steam behind him this spring and I’m not sure he’s post-hype. Still, he’s already proven he can go 15/30, and I don’t think 40 SB is out of reach if he can stay healthy. I think Rocco Baldelli will finally just let Buxton be what he is – a good fielding high strikeout bat with a bit of pop – and just let him play. If you play in an OBP league, just pass on by, but if you’re in a standard 5X5, then I’m looking at him at or after that ADP if he fits the needs of my team.

So now we’re talking sleeper ADP territory. Happ is getting taken in the last two rounds of typical 12-teamers. People were pretty excited about him after a 24-HR rookie year, but last year’s .233 average and 36.1 K% have scared many away. If there’s a common thread among these post-hype sleepers it’s the high strikeout rates. If Happ can take a small step forward in making controlling the swings and misses he becomes a very intriguing player. He enters 2019 with OF and #B eligibility and could add to that. With 500 at-bats a 25-HR, 15-SB season is within the reasonable range of expected outcomes.

If you watched Bauers during 2018 you saw a young player with a lot of energy, seemingly trying to be something he’s not. He’s got a sweet swing that makes you think .300, but he was trying to jerk the ball and get to 30 HRs. The end result was a .201 average and evidently a loss of faith by Tampa Bay management as they shipped him out of town. Now in Cleveland it looks like he’ll get most of the time at first base, but may also continue to get outfield work at times. What you might not know about Bauers is that he’s faster than you would think. He stole 20 bases in Triple-A in 2017 and 16 in his combined work in 2018. I expect that he’ll get his average in the .260’s at least and you could sneak away with double-digit speed and power for one of your last picks.He may never be an elite bat, but if you can get that type of production out of your end-game plays, it’s a lot easier to build a balanced team.

Most years I could probably include 10-plus names on this list. I’m not sure why it seems to be getting harder to identify post-hype sleepers. I was looking forward to this column all offseason, and now I can’t help but find it a bit anticlimactic. Maybe it’s the fact that so many big-hype prospects are coming up to the Major Leagues and dominating. I’m not sure, but if you think of some I’ve missed, please mention them in the comments below. The end goal is to help readers find that big value, whether it comes from me or you.

Did you find Doug’s take on Post-Hype Sleepers useful? For more great rankings, strategy, and analysis check out the 2019 FantraxHQ Fantasy Baseball Draft Kit. We’ll be adding more content from now right up until Opening Day!