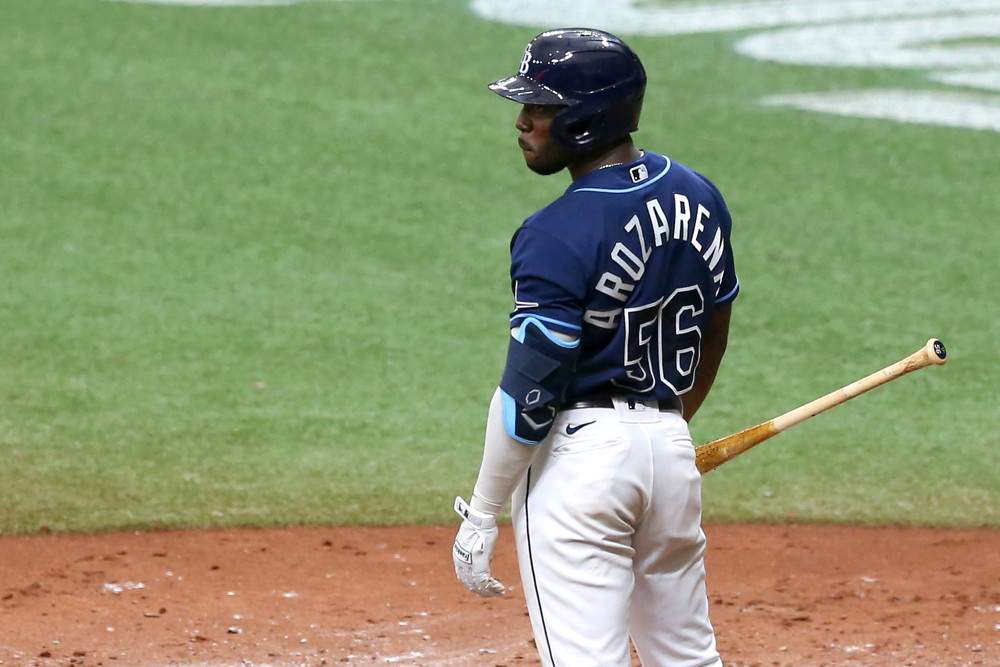 Even though we’ve dug deep into tons and tons of fantasy baseball players, there’s still so much more. This week, we bring you, outfielders to consider fading based on risky profiles, potential regression, and ADP. These risky profiles include outfielders with a high HR/FB rate, surprising 2020 seasons, and other concerns. With a few of these players, they exploded for breakout seasons in 2020. However, their ADP feels a tad steep given the sample. We’re using NFBC ADP over the past month to guide us as we head into the heart of fantasy baseball draft seasons. Check out the FantraxHQ Fantasy Baseball Draft Kit that includes the staff consensus outfield rankings to see where each analyst ranks these players. That said, let’s start diving into outfielders to consider fading.

Holy Randy Arozarena! It pains me to write him on this list of outfielders to consider fading, but it feels like regression headed his way. Before the 2020 season, I liked him as a dynasty player to buy. However, now his stock soared so high, one could argue that he’s someone to trade away in dynasty leagues. In 2020, Arozarena hit seven home runs, 15 runs, 11 RBI, and four steals with a .281 batting average in 76 plate appearances.

Now let’s check his numbers in the postseason. Arozarena smacked ten home runs, 19 runs, 14 RBI, and zero steals with a .377 batting average in 86 plate appearances. If we combine the regular season and postseason, he would’ve tied for 4th in home runs with Jose Ramirez, Fernando Tatis Jr., and Mike Trout. Here’s where the regression monster comes in. Arozarena had a 46.7% HR/FB rate in the regular season, and then in the postseason, he had a 52.6% HR/FB rate. Amongst qualified hitters, here are the leaders in HR/FB in 2019 and 2020.

Over a full season, there’s no way Randy Arozarena keeps up that ridiculous HR/FB rate. Even when we look at home runs per at-bats, Arozarena sticks out as an outlier. The table below lists the leaders in home runs in each given season. However, with Arozarena, we’re adding in his postseason stats since he only totaled 76 plate appearances in 23 games during the regular season. We notice the closet hitters each season (2019 and 2020) – Mike Trout and Luke Voit.

Even when we consider HR/PA, we find similar results from a handful of the top home run hitters in 2019 and 2020.

Although he didn’t qualify for percentile rankings, Arozarena’s Statcast data looks juicy with a 14% barrel rate and a 44.2% hard-hit rate. If we lower the qualified batted ball events (25 BBE), Arozarena boasted a 96.8 mph average exit velocity on FB/LD (No. 31) tied with Joey Gallo and a max exit velocity of 113.1 mph (No. 47), tied with Aaron Judge. As a prospect, Arozarena graded with plus raw power, so maybe the power sticks long-term with the potential for home runs in the mid-20s.

The BAT projects Arozarena for 23 home runs, 85 runs, 75 RBI, and 20 steals with a .259 batting average. Although I loved Arozarena heading into the 2020 season, I’m a bit hesitant about how that plays out over a full season. I hope I’m wrong, but he’s an outfielder to consider fading. On the flip side, take a look at Arozarena’s deep dive by fellow FantraxHQ writer Justin Johnson.

Another guy that honestly hurts to mention as one of the outfielders to consider fading – Cavan Biggio. It’s partly due to the surprisingly high NFBC ADP inside of pick 60. However, he does have the positional flexibility to play in the infield and outfield as well. In 2020, Biggio hit eight home runs, 41 runs, 28 RBI, and six steals with a .250 batting average. Biggio dominates in OBP leagues with a career 16.1% walk rate and .368 OBP. With that walk rate, we know Biggio barely chases pitches or swings at all with a career 15.9% O-Swing% compared to the league average hovering around 30-31%. That said, his 35.9% Swing% is also under the league average ranging from 45.9-47% the past two seasons.

As a lefty, Biggio uses a pull-heavy fly ball approach with a 44.8% career flyball rate and a 48.5% pull rate. Interestingly, he doesn’t rank highly in any of the Statcast batted ball metrics. Even in 2019, Biggio’s hard-hit rate, barrel rate, and xwOBA finished slightly above average. Just because he doesn’t pop off the page with his Statcast data doesn’t mean he isn’t a valuable fantasy player. The additions of George Springer and Marcus Semien push Biggio down the lineup a bit. The BAT projects Biggio for 22 home runs, 84 runs, 70 RBI, and ten steals with a .236 batting average. Although the counting stats look solid, the batting average worries me with the extreme patience at the plate. I love the power/speed potential for Biggio, but the low batting average is concerning.

Everyone’s favorite 2020 deep sleeper, Teoscar Hernandez, exploded onto the scene in the shortened season. We always knew he could crush the ball, but issues related to making contact. Although his chase rate of 34.3% isn’t terrible, his 66.2% contact rate continues to finish below the league average.

Here’s where we start to drool. Hernandez annihilated the baseball with a 53.1% hard-hit rate (96th percentile), an 18% barrel rate (98th percentile), and a 98.2 mph average exit velocity on FB/LD (No. 11). The high HR/FB rate plus the low contact rate makes him one of the outfielders to consider fading.

The BAT projects him to hit 34 home runs, 86 runs, 90 RBI, and eight steals with a .239 batting average. If Teoscar Hernandez keeps his batting average afloat and makes enough contact, his hard-hit metrics will play. Given all those juicy metrics, the Hernandez hype feeds into his high NFBC ADP over the past month near Michael Conforto, who I’d gladly take over Hernandez. In terms of roster construction and draft strategy, I prefer the safety and consistency of Conforto over Hernandez. Even his teammate Lourdes Gurriel Jr. feels a bit safer with an ADP near Hernandez.