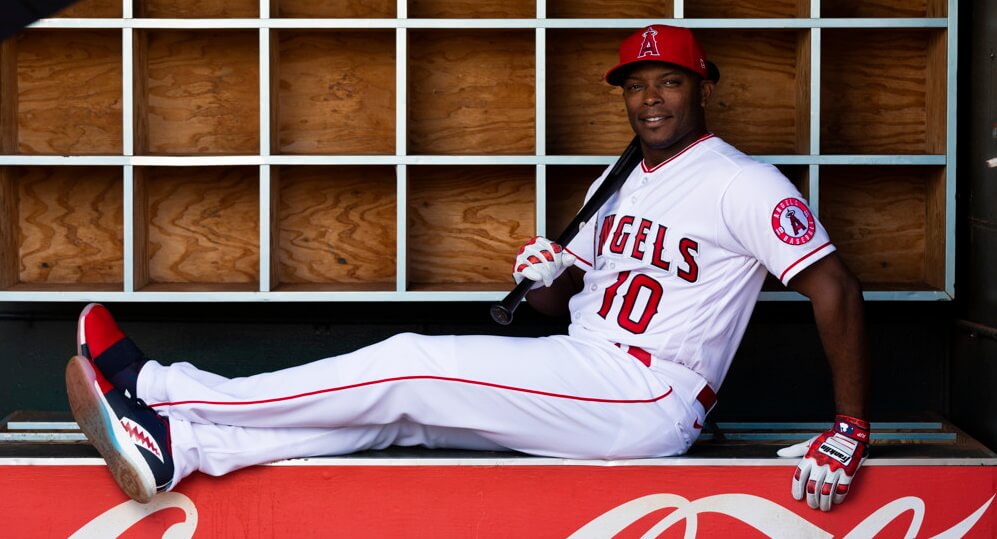 It seems as though in every draft, I find myself wishing I hadn’t filled up my outfield slots the deeper into it we get. With so much talent at the position, there are so many ways you can go when drafting outfielders. Some of my favorites are sleepers going at a great value. Waiting on some of these players could go a long way in helping you build the rest of your roster, whether you play in a three or five outfielder league. Let’s take a look at some outfield sleepers going outside the top 150.

There were big expectations in Texas for Willie Calhoun after the team acquired him from the Dodgers in exchange for Yu Darvish in 2017. Some frustrations with playing time and uncertainty about his position led to a disappointing 2018. Things turned around for Calhoun in 2019 as he hit .269 with 21 home runs in only 83 major league games.

Willie Calhoun can flat out hit, making contact in the zone at a 90.8% rate, well above the league average of 84.9%. Calhoun put up an impressive 40.7% hard-hit rate while raising his launch angle significantly, hitting only 36.4% ground balls. Combine that with improved plate discipline as he only struck out at a 15.7% clip, and you’ve got a recipe for a breakout. He should be batting near the middle of the Rangers’ order, in prime position to drive in runs.

Calhoun goes into the season as the full-time left fielder. A 30 home run, 90 RBI season with a good batting average could be in store for Calhoun. This sleeper is going to return excellent value. I would feel perfectly fine with him as my third outfielder in a 12 team league or deeper.

Did you know that Bryan Reynolds has never hit under .300 at any professional level? That includes the .314 he hit in his 2019 rookie season. The .296 xBA says the hit tool is indeed legit. He gets there with a 28.7% line drive rate and a 41.7% hard-hit rate. He managed to hit 16 home runs and chip in three steals. In a full season, he could hit about 20 home runs with six to seven steals. That sounds awfully similar to someone like Jeff McNeil, who’s being drafted much higher. Drafting Reynolds for batting average can open up possibilities throughout the draft. Try pairing him with our next sleeper, for example.

This one is by far one of the best values among my outfield sleepers. Justin Upton had his 2019 season derailed when he injured his toe in Spring Training. He only managed to appear in 63 games, hitting .215 with 12 home runs. The batting average did come with a .261 BABIP. Upton has not had a season with a BABIP under .300 since his debut in 2007. And 12 home runs in 63 games put him at a 30 home runs pace, or pretty much a regular Upton year. Now, he comes into the 2020 season fully healthy and ready to hit in the middle of an improved lineup that added Anthony Rendon.

Avisail Garcia is a popular sleeper pick, and with good reason. He did something last season that only 17 other hitters accomplished, he hit at least .280 with 20 home runs and 10 steals. All of the others are being drafted in the top 120 except for his teammate Ryan Braun. Garcia is supposed to share the right field duties with Braun, but I wouldn’t let that discourage you from taking a chance on him. All it takes is one injury to an outfielder or first baseman to secure an everyday job. Lorenzo Cain and Ryan Braun aren’t exactly spring chickens, and they do have a track record or injury.

Enough about the situation, there’s plenty to like about Garcia himself. He’s always been one that you hear needs to hit more fly balls. Well, you know what, he is! Garcia has reduced his ground ball rate each year over the last three seasons and a total of 6.2% since 2017. When he does put the ball in the air, he makes excellent contact with a 95.2mph average exit velocity on line drives and fly balls. This has also been consistent over the last three years. In my Cleared for Takeoff article, I explained the correlation between exit velocity on line drives and fly balls and barrel rate. If Garcia’s trend of lifting the ball continues, we’re sure to see his barrel rate improve as well. And he’s in a perfect park to do it. You’d probably like to have your outfield filled by now in a 12 team league, but in a 15 team league, he makes for a good fourth outfielder.

Austin Hays was a touted prospect on the rise after his prolific 2017 season in the minors. Injuries got in the way in 2018, but he came back strong last season and hit .309 with four home runs and two steals in only 21 games for the Orioles. Now a post-hype sleeper, Hays goes into 2020 with a strong chance to be Baltimore’s everyday center fielder.

While Hays did have a .303 xBA, it was in only 75 plate appearances, so it must be taken with a grain of salt. He hit .254 in Double-A with ten home runs and six steals. He could sit right in the middle while putting up good power numbers in that ballpark. With an 85th percentile sprint speed, Hays can steal some bases too. Should he hit leadoff, his value only goes up. I can see Hays batting .265 with 25 home runs and ten steals this year, making him a perfect fifth outfielder and one of the lesser-known outfield sleepers.

Even at 37 years-old, Shin-soo Choo is still crushing it. Choo is the epitome of the boring veteran that just provides reliable numbers. He hit .265 with 24 home runs and 15 steals last season. And his ability to get on base with a .371 OBP has him hitting leadoff for the team, where he scored 93 runs last year. There really isn’t any reason to think that Choo is going to do much differently. In fact, his exit velocity on line drives and fly balls sat at 96.7mph, right behind Yandy Diaz and Shohei Ohtani. Choo makes for a good option in any format, and more so in OBP and points leagues.

Who are your favorite outfield sleepers this year? Share some names in the comments below. We promise not to tell the rest of your league.