Nick Kingham was one of the early success stories in the minors this season, but when news broke last Friday that he would make a spot start for the Pirates on Sunday, he caused only a minor ripple in fantasy circles. The Pirates rewarded the 26-year-old with the assignment after he went 2-1 with a 1.59 ERA, 0.97 WHIP and 27 strikeouts over 22.2 innings at Triple-A Indianapolis.

It was that last figure in the stat line that intrigued many of the fantasy owners who picked him up prior to his major league debut against the Cardinals. Kingham had not made his mark as a strikeout pitcher in the minors, particularly during his first season in Triple-A back in 2014, when he registered an 18.0 percent K-rate. He did surge early in 2015 with a 23.5 percent rate, but that season was cut short by Tommy John surgery. In his first full season back from the procedure, Kingham recorded a modest 19.3 percent strikeout rate at Indianapolis last year.

This season’s 30.3 percent strikeout rate over four starts coincided with Kingham introducing a slider into his arsenal. In his major league debut, he employed the slider for 32 of his 98 pitches, and batters whiffed on them 12 times. Kingham also racked up 11 called strikes on his four-seamer, which he threw 42 times. Those two trends enabled Kingham to tally nine strikeouts with no walks over seven innings. He was a tossing a perfect game for the first 6.2 of those innings and wound up allowing only a Paul DeJong ground ball single.

The easy explanation is that Kingham started throwing a slider and — BOOM — he became a strikeout machine. The slider is a reliable swing-and-miss pitch, as major league pitchers as a whole have posted a 17 percent swinging strike rate with it over each of the last three seasons. Yet if we look at those starting pitchers who have increased their slider usage since last season, there is not much evidence to suggest that it’s a sure-fire method for increasing one’s strikeout rate.

The graph below displays the year-to-year change in slider use percentage, as well as the value generated for every 100 sliders. The pitchers in the upper-right portion of the graph are using the slider more often than last season and are generating positive value with the slider so far this season. The more sparsely-populated lower-left portion consists of pitchers who are throwing fewer sliders and generating negative value with it.

Note: Data in the graph are for games played through Sunday, April 29. 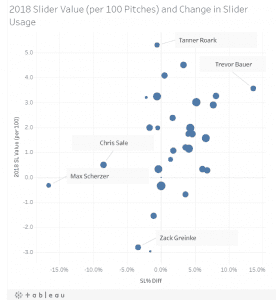 Through this weekend’s games, of the 39 qualified starting pitchers featured in the graph, no one had increased their slider usage at a higher rate than Trevor Bauer had, yet the Indians’ righty had decreased his strikeout rate from 26.2 percent in 2017 to 24.5 percent in 2018. His swinging strike rate on the slider had fallen from 20.6 to 15.6 percent. We should also bear in mind that Bauer had still not been especially reliant on the pitch, throwing it 18.0 percent of the time. Tanner Roark had been throwing the best slider in terms of value per 100 pitches, yet his strikeout rate through his first five starts barely budged from last year, increasing from 21.4 to 22.6 percent. What about a pitcher who throws a slider often, has increased his usage rate and is getting positive value from it? Look no further than Luis Severino, who has increased his usage from 35.1 to 40.3 percent. Despite the increasing reliance on the slider, Severino’s strikeout rate has essentially held steady with a 29.2 percent rate — just 0.2 percentage points below his rate from last season.

Two pitchers stand out as having increased their slider usage and their strikeout rates since 2017. Gerrit Cole would seem to be the best example of the power of the slider, as he has experienced an enormous increase in his K-rate — from 23.1 to 39.4 percent — while upping his slider usage from 17.2 to 24.0 percent. Yet increased slider usage is only part of the story, as Cole has dramatically increased the swinging strike rate on his four-seam fastball and curveball as well. Rick Porcello is throwing sliders at a 49 percent higher rate, and that has gone a long way towards increasing his strikeout rate from 20.5 to 24.2 percent.

If you are noticing that Chris Sale and Max Scherzer are throwing fewer sliders, know that there is no reason to worry about their value (though their ERAs and strikeout rates would tell you the same thing). Sale has compensated by getting more swings and misses on his sinker. Scherzer has actually increased his strikeout rate by nearly doubling his whiff rate on his four-seam fastball and using his cutter more often.

In looking at the slider usage trends for these pitchers, the explanation for Kingham’s success becomes less clear. It’s hard to conclude anything definitive about the impact that slider usage is having on any of the pitchers mentioned here because of limited samples, as well as the limited predictive power of pitch value data. Then again, that’s exactly the point to be made about Kingham. It’s simply far too soon to know if using a slider has really made him a better strikeout pitcher and a better pitcher in general.

In the event that Kingham is having a legitimate breakout, he is worth a speculative add in just about any format, given that you don’t need to drop anyone of value to accommodate him. Even in deeper leagues, though, it’s not advisable to break the bank to add him to your roster. For now, he will stay in the Pirates’ rotation, but manager Clint Hurdle is not guaranteeing Kingham any job security beyond his scheduled start on May 4 at the Brewers.