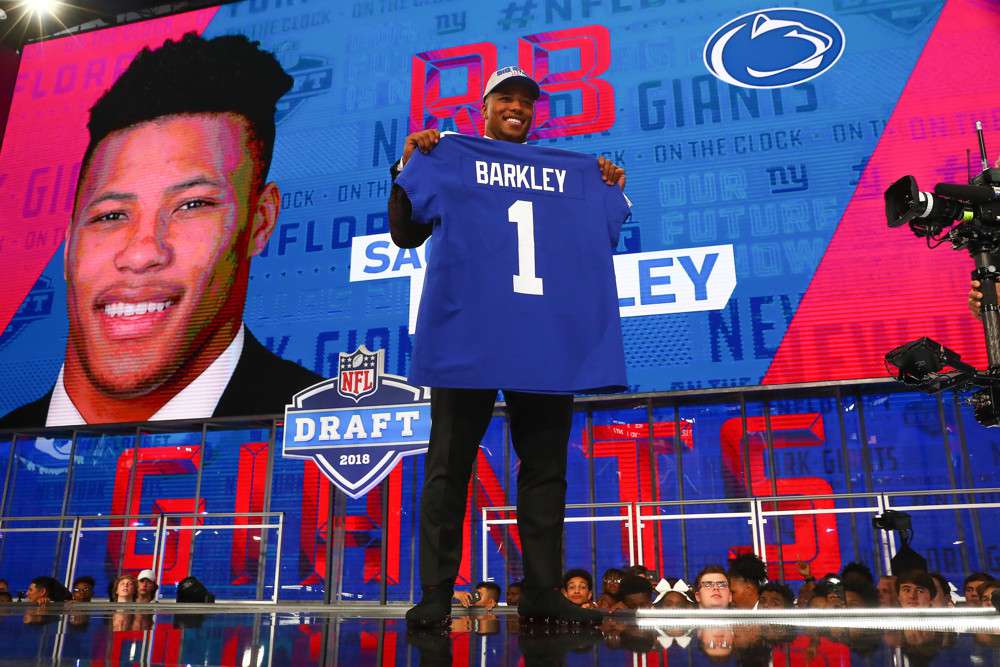 Finally, the dust has settled, and we can start to take an early look at the 2018 fantasy football rookie rankings. Below are the top 10 rookie rankings for redraft purposes in point-per-reception leagues. As we get closer to camp and preseason nears, it’s very likely this list changes, so be sure to follow my rankings on FantasyPros, and check back here on Fantrax for updates as we get closer to fantasy football draft season. Also, check back next week, as I’ll dive into players 11-20 in the rookie rankings.

Forget about all the noise surrounding the New York Giants and General Manager Dave Gettleman — Saquon Barkley is going to be a fantasy football stud in his first season in the NFL. Whether you agree with the selection or not, there’s no question Barkley will be the first player taken in a rookie draft, and he’ll cost you a first-round pick in redraft leagues. I have him slotted behind Le’Veon Bell, Todd Gurley, Ezekiel Elliot and David Johnson. At least for now. We’ll dissect dynasty rankings as we get closer to the season, but he’ll probably cost you a top-five pick in leagues starting fresh in 2018.

The 6-foot-0, 233-pound running back out of Penn State has all the tools to be a star in this league right away, despite an average offensive line. With that said, the Giants made some improvements, adding LT Nate Solder and then spending a second-round pick on left guard Will Hernandez, who never surrendered a sack or let his QB get hit in just over 700 snaps with UTEP last season, according to Pro Football Focus.

Elliott and Leonard Fournette lived up to expectations and were fantasy relevant in their rookie seasons, and Barkley has a higher ceiling given his excellent receiving skills. As you’ll see below, 1,500-1,600 total yards with double-digit touchdowns are certainly doable. Barkley has a ton of speed, he’s elusive, can block, catch and is a near lock to touch the ball 20 plus times with nobody in sight to steal work.

This is a great landing spot for Rashaad Penny, as there is very little competition for him in Seattle. Thomas Rawls and Eddie Lacy are gone (they won’t miss them), Mike Davis and C.J. Prosise have not been able to stay on the field, and Chris Carson is coming off a season where he suffered a broken leg. Plus, the Seahawks spent a first-round pick on Penny for a reason and reportedly turned down trade offers to acquire him immediately after the selection. Look for Seattle to get back to their old ways of running the football.

The offensive line in Seattle is very much in question, and they haven’t been able to get much production on the ground apart from Russell Wilson over the years. However, Penny should still be able to flirt with RB2/FLEX numbers in his first season. Don’t forget the Seahawks traded for Duane Brown in 2017, and the signing of D.J. Fluker should help things, too. Some question Penny’s run-blocking abilities, but again, this is a backfield that’s his for the taking.

Sony Michel is probably my second favorite back in the draft, but I’m not a huge fan of his landing spot. It’s not that Michel can’t succeed with the New England Patriots, because he can; it’s just that it’s the New England Patriots. Michel fills a void left by Dion Lewis, but the Pats still have Rex Burkhead, James White, Jeremy Hill and Mike Gillislee on the roster. In all seriousness, you can probably forget about Hill and Gillislee, but it’s a crowded backfield for now.

Michel is by far the most talented of the second tier, as he averaged 7.2 YPC against a schedule chock full of SEC defenses. He had the highest percentage of carries (14.1%) to gain 15 or more yards according to Pro Football Focus. I see speed, power, vision and one-cut ability in his game. Michel will get early-down duties and potentially goal-line work, but don’t forget that Burkhead and Gillislee combined for 10 rushing touchdowns last season. That said, this is an offense that will score its fair share of points. Michel’s one downside is that he totaled 60 catches in his four years at Georgia, and just five last season. There are some knee concerns, but the Patriots don’t seem to have them considering the first-round selection.

Derrius Guice surprisingly fell to almost the end of the second round (59th overall) due to some reports of off-field issues surrounding the LSU running back. Some projected Guice to go to Washington in the first round, and they must have been very excited to get him in the second considering many viewed him as a first-round talent.

Guice will get first crack at early down work in Washington with Chris Thompson locked into the third-down role. Washington clearly was not impressed with what they got from Rob Kelley and Samaje Perine last season, but both are still around. This is a backfield you’ll want to monitor throughout camp and preseason, but Guice should be able to outperform both. He has RB2 upside.

Expect Ronald Jones to open up 2018 as the starting running back in Tampa Bay in his first season, as he has to compete with only Peyton Barber for touches, and let’s be honest … that’s not much competition. Charles Sims and Jacquizz Rodgers are no threat and project to get only third-down work. The USC product is explosive and appealing due to the fact he’ll have a significant role out of the gate.

The 21-year-old is the youngest back in the class and checks in with a lower projected touchdown total due to the number of options in the red zone for Jameis Winston, who sometimes likes to call his own number. Over the years, we’ve seen Winston lean on Mike Evans and Cameron Brate, not to mention second-year tight end O.J. Howard. Even still, that’s a small knock, considering how unpredictable projecting touchdowns can be.

Much like Penny and Jones, Freeman should have a legit chance at getting significant touches on a weekly basis with the Denver Broncos, who released C.J. Anderson earlier this offseason. Freeman averaged 5.9 YPC in four seasons at Oregon and Devontae Booker and De’Angelo Henderson are his only competition.

The 6-foot-0, 241-pound back has the ability to churn forward in short-yardage and goal-line situations. He leaves the Ducks as their all-time leading rusher after racking up 5,621 yards on 947 carries. That’s a lot of touches for the 22-year-old. Some may argue he’s a risky dynasty pick given the amount of hits he’s absorbed, while others will point out his experience and durability. The potential to take over this backfield is there, but it’s likely the Broncos rotate through a few backs this season.

Nick Chubb is a fantastic add for the Cleveland Browns, but it’s a big-time blow for those who have Carlos Hyde in dynasty formats. Chubb will compete with Hyde for early-down work, but the future is bright with Chubb and Duke Johnson, as the Browns can get out of their contract with Hyde after year one. Or maybe the future lies with Hyde and Cubb, either way, there is a lot going on in Cleveland right now and many mouths to feed.

The 5-foot-11, 227-pound back only 12 grabs in his final three seasons at Georgia. However, the he is powerful and should be a lock for goal-line work. What’s impressive is that Chubb was able to rack up three 1,000-yard seasons in four years with Sony Michel also involved in the backfield. Chubb is a much better dynasty pick than a redraft selection.

D.J. Moore closed the gap between him and Calvin Ridley significantly in the weeks leading up to the draft and ended up being the first wideout taken off the board. Part of the reason for the jump was his strong showing at the Combine, which included a 4.42-second 40-yard dash.

The Maryland WR topped 1,000 yards on 80 catches and found the end zone eight times last season. Moore is likely suited for a role in the slot with Devin Funchess and Torrey Smith lining up wide. Curtis Samuel and Jarius Wright don’t pose much of a threat, and neither does Smith. All three will be in the mix, though. Carolina has done a nice job over the past couple of seasons providing speedy playmakers for Cam Newton, and this will help his stock. Moore is a WR5 at best.

Calvin Ridley is considered the most polished wide receiver in the draft, and he landed in a pretty good spot. That said, this is a move that will help the Atlanta Falcons more than your fantasy team. It’s another weapon for Matt Ryan, but Ridley will be behind Julio Jones and Mohamed Sanu for targets. The Falcons also have two backs in Devonta Freeman and Tevin Coleman who can catch.

The move reunites Ridley with Offensive Coordinator Steve Sarkisian, who was the OC with Alabama in 2016 when he caught 72 balls for 779 yards and seven touchdowns. Ridley racked up over 200 grabs in his three years with the Crimson Tide, who are known to lean on the ground game. The 23-year-old has the upside and potential to move up to WR2 on the depth chart, but he doesn’t figure to be anything more than a bye-week replacement in his first season. He has better long-term/dynasty value.

Anthony Miller joins a brand new looking wide receiver corps in Chicago that consists of Allen Robinson, Taylor Gabriel, and tight end Trey Burton. The Bears must have really liked Miller to trade next year’s second round pick in order to move up 54 spots to snag the wideout.

Miller’s hands are suspect, but he’s quick, explosive and could very well finish the season as the No. 2 option for Mitchell Trubisky in what is expected to be a pass-happy offense with Matt Nagy calling the shots. Chicago lost Cameron Meredith, Kevin White hasn’t been able to stay healthy, and Gabriel is more of 30-40 catch guy. Miller makes for a great best ball play.