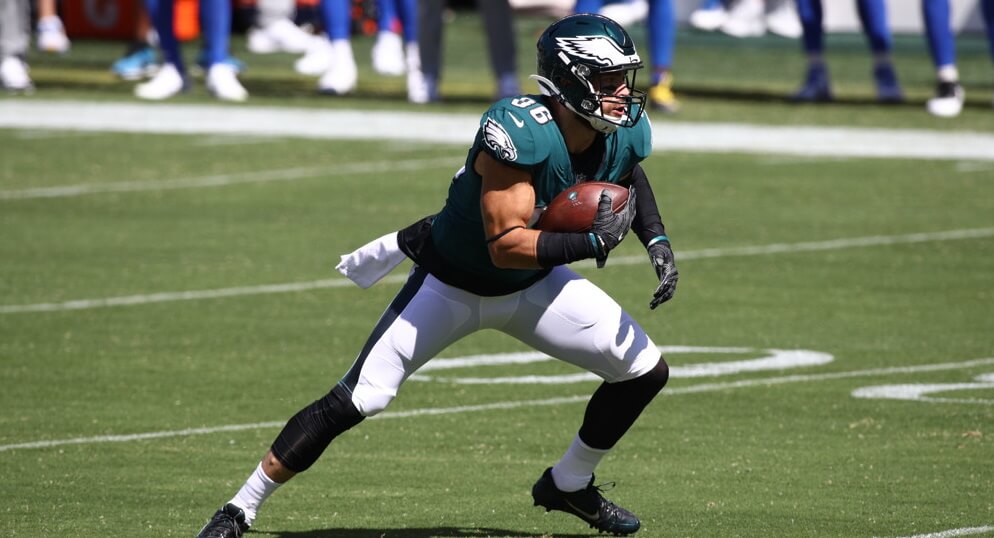 Zach Ertz has been placed on the IR following an ankle injury that occurred in Week 6 vs. the Ravens. Adam Schefter has reported that the injury has been declared a high ankle sprain. Ertz is expected to miss anywhere from 3-6 weeks, per multiple reports. He joins fellow Philly TE Dallas Goedert in the Injured reserve.

The talk of the town is how the Eagles have revealed they were taking calls on trades for Ertz prior to the injury. Ertz and the Eagles have had their difficulties coming up with a mutually agreeable contract extension.

In regards to the impact of the injury, a high ankle sprain is painful and difficult to deal with for any athlete, but especially for a 6’5’ 250 pound receiver. Ertz’s game is revolved around cutting and change of direction, combined with placing massive forces into the ground to alter his momentum. A high ankle sprain can really hinder his effectiveness on the field when beginning rehab and returning to on-field drills.

The tricky situation to analyze is how aggressive the Eagles will be in their handling of his injury. They are actually leading the pitiful NFC East with a 2-4-1 record, so having Ertz back ASAP can help lead them to a division title. On the other hand, if Ertz is rushed back and is clearly a major cog in their return to NFC East champions, he has another bargaining chip at the negotiations table.

ADVICE: At this point in time, it is reasonable to assume Ertz may return for fantasy playoffs in Week 12 or 13. If you have an open IR slot, he’s an easy stash. But after Ertz’s poor production over the first 6 games (despite a team-high 45 targets), you may even consider dropping the once indispensable TE. Dallas Goedert would be the sensible replacement option, as he will be taking the roster spot, and is optimistically slated to return for Week 10 after a Week 9 bye.

Raheem Mostert had been playing excellently for the San Francisco 49ers and was taking advantage of his increased touches during Tevin Coleman’s IR stint. Sadly, Mostert will join Coleman after sustaining his own high ankle sprain. When healthy, Mostert has proven he belongs among the top of the 49ers RB depth chart and has been a solid producer in the passing and receiving game. He’s provided an excellent, 5.94 rush yards per attempt and has caught 11 of 12 targets and was the lone bright spot in San Fran’s one-sided loss to the Dolphins in Week 5.

The severity of the high ankle sprain has not been clearly reported, although many outlets say he will “most likely” go in the IR. If it is not a sure thing, I’d imagine this is a Grade I or II sprain, where severe stretching of the ankle ligaments and possibly a slight tear are present. Although, we must remember Mostert is 8 inches shorter and 50+ pounds lighter than Ertz, which will make it a bit easier to trust the ankle for mobility when the time comes.

ADVICE: Mostert has been a productive player when healthy and has seemed to gain the trust of Kyle Shanahan, who has openly stated he would like to get Mostert the ball more frequently. Unless otherwise riddled with injuries, do what you can to keep Mostert, as he may return soon enough to help your team before or during the fantasy playoffs.

Miles Sanders has not been placed on the IR, but is expected to miss 1-2 weeks after injuring his knee on a 74-yard scamper vs. the Ravens. This play ended with a fumble, and then a successful fumble recovery for a touchdown. It’s Sanders’ second 74 yard run in as many weeks, but this one came with a price. The specificity of this knee injury is hard to find, but multiple sources are stating 1-2 weeks absence for Sanders.

ADVICE: Sanders is most certainly worth holding on to, and even a nice buy-low candidate if you have some cushion at the top of the standings or if you have some nice depth elsewhere. Sanders leads the NFL with yards per attempt at 6.1 and remains a high-end fantasy asset. He should be held onto everywhere.

Like Nic’s Week 7 NFL Injury Report? Check out the rest of our Week 7 Fantasy Football lineup!