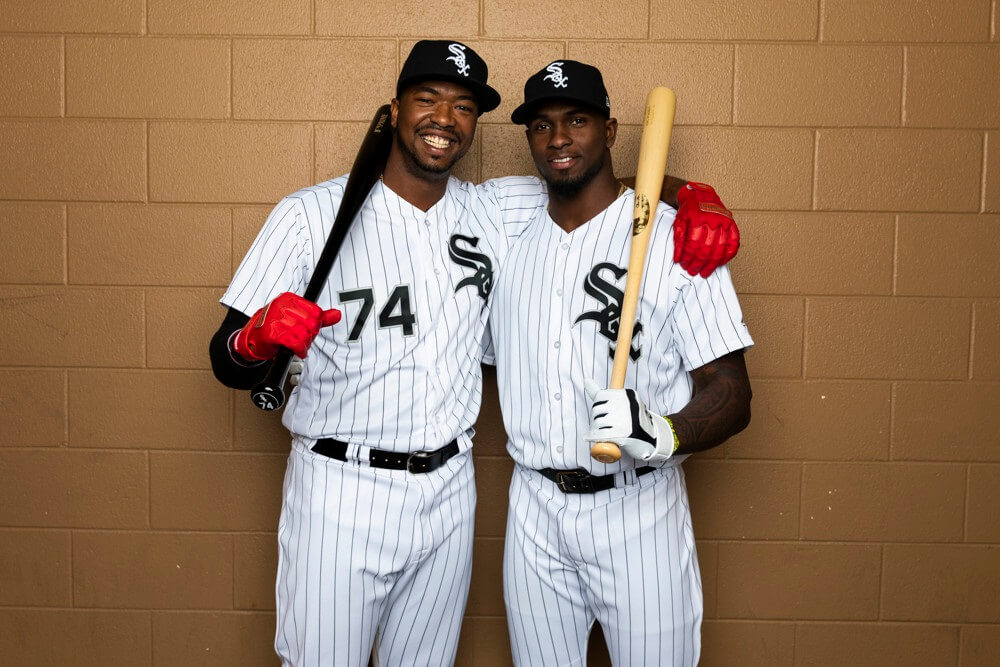 With a month of the minor league season in the books, now seems like a good time to take a look at some of the MLB prospects that have impressed to start the season and are improving their prospect stock both in real life and in dynasty leagues. This could be due to hot starts, improving in a particular area, or just simply staying healthy. And as we’ve begrudgingly figured out all too well this season, staying healthy is becoming a struggle for many baseball players these days.

Now, a month isn’t an overly big sample size. I know. However, some of these trends I noticed dating back to last season, and others have been so prominent that they cannot be ignored. And when it comes to the health side of things, getting back in the box or on the mound to show what you can do is all it takes to jumpstart a prospect’s stock and get it trending back in the right direction.

Finally! Immediately upon his signing, I hopped aboard the Luis Robert hype train, took over the conductor seat, and pushed the throttle forward to full power. From what I had seen of him in videos, Robert screamed future star and I was all-in. And after nearly three years and 492 injuries later, that immense upside is finally being put on full display. Today is May 6th and Robert is still hitting over .400 at .414, and with his three doubles Sunday, he now has 20 extra-base hits in 25 games with eight of those leaving the yard.

Luis Robert does it again! This time, a first-inning 3B for the #NextSox OF. pic.twitter.com/6dKs44SQ5b

The loud and sexy tools Robert possesses have always been there, it was just a matter on staying on the field long enough to put them on full display. Aside from missing a couple of games a few weeks back, it’s been a clean bill of health for Robert so far in 2019. In addition, Robert’s power, as you can see above, has peeked it’s head out plenty through the season’s first month. Even through all the injuries and sporadic playing time, Robert still hit for a solid batting average and flashed his plus speed upside. The power, however, seemed to have stayed back in Cuba. If Robert can continue to tap into his raw power, the sky’s the limit and a spot in my mid-season top-10 will likely be in order.

Before the season, you’d be hard-pressed to find an MLB prospects rankings list with Yordan Alvarez above Kyle Tucker. That gap between the two has now closed some. Why? Because Alvarez has been arguably the best hitter in the minors so far this season with a .406/.500/.901/1.401 slash line with 10 doubles, 13 home runs, 38 RBI, and 30 runs scored in 27 games. Yes, it’s the PCL, but those numbers are damn impressive no matter what league you’re in.

Not one area in his game has seen a major jump, but Alvarez has taken steps forward in his plate approach, which was already pretty good to begin with. The walk rate has jumped from 11.1% to 14.0% while his strikeout rate has dropped from 24.3% to 17.8%. A more patient Yordan Alvarez is a scary thing for opposing minor league pitchers. Alvarez is approaching top-15 prospect status and could be called up any day now, even before Tucker.

We already knew Matt Manning was a really good pitching prospect. But there’s a difference, between really good and great. That difference separates the men from the boys. Well, guess what, Matt Manning has been putting the man in Manning of late and has climbed the ladder into the elite pitching prospects club. Two big reasons for this has been the continued development of his changeup and improved command.

Here's that Matt Manning curveball I was talking about from two nights ago. 82 mph, about as good as of hook as you'll see pic.twitter.com/vsvFHd4ApC

As you can see above, Manning has one of the nastiest hammers in the game. Low-80’s with hard downward bite that makes opposing batters look foolish with regularity. Pair that with a double-plus heater in the mid to upper-90’s with arm side run and you have one of the best combinations of two pitches that you’ll find in the minors. But despite the utter domination of those two pitches, Manning’s inconsistent changeup and command of his entire arsenal were holding him out of that elite level. Both of those began showing improvements last season and that has carried over into 2019 so far. Casey Mize continues to lead the way and might take over as the top pitching prospect in baseball once Forrest Whitley gets called up, but Manning isn’t far behind and is in the conversation when talking about the top-5 or so pitching prospects in baseball.

Yay, Nate Pearson is still healthy after a month of pitching. Go ahead a do a little happy dance, I’ll wait. In fact, I’ll do the happy dance with you. We’ve all drooled over the upside and ceiling of Pearson since he was drafted, but that’s all it’s been so far. Upside. At least, until recently. Pearson was able to get in toms work during the Arizona Fall League and has looked really strong so far this season with a 0.86 ERA, 0.62 WHIP, and 35/3 K/9 ratio in just 21 innings of work.

That start earned the 22-year-old a promotion to the Double-A Eastern League and if he can continue to dominate Double-A hitters, a bump up to Triple-A could be in the cards later this summer. Pearson has always had the stuff to dominate hitters, but hasn’t been able to stay on the field long enough to put it all together. Until now. I’d still like to see him develop his changeup more, but now that he’s back on the mound with those injuries hopefully behind him, he’ll be able to do so and reach his lofty ceiling,

When you watch Zac Gallen pitch, none of his pitches are going to blow your mind. His arsenal consists of a bunch of average to above-average offerings with none being considered a true plus pitch. That’s okay though if you know how to locate and mix those pitches as Gallen can. After showing above-average command coming into 2019, Gallen has taken it to a whole new level this season, improving his groundball rate and strikeout rate while cutting his walk rate by more than half from 8.2% to an even more impressive 3.5% Don’t go too hog wild as a .157 BABIP and 97.7% strand rate scream regression, but Gallen definitely deserves your attention and admiration moving forward. He should be up with Miami at some point early this summer. And while he doesn’t quite have the ceiling of a Sandy Alcantara, Gallen’s command gives him a much higher floor.

Eric Cross is the lead MLB/Fantasy Baseball writer and MLB prospects analyst for FantraxHQ and has been with the site since March 2017. In the past, he wrote for FantasyPros and FanSided. He is also a member of the Fantasy Sports Writers Association (FSWA) and a contributor in the best-selling Fantasy Baseball Black Book. For more from Eric, check out his author page and follow him on Twitter @EricCross04.

Week 6 Fantasy Baseball Recap: What you might have missed from 30 MLB teams

How to Bid on Top Prospects in Fantasy Baseball!