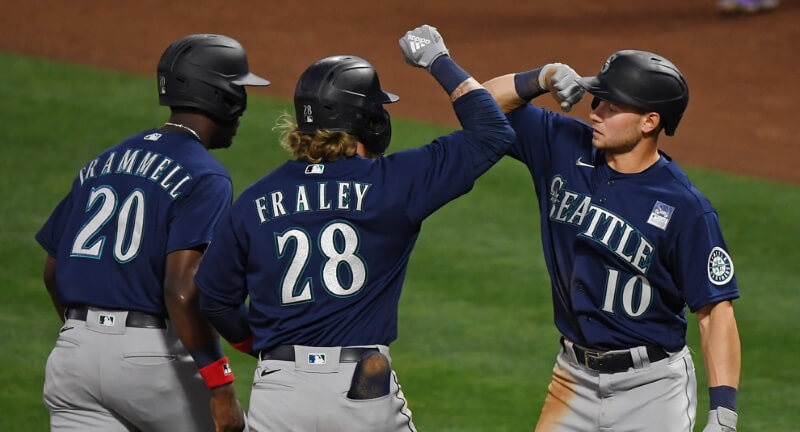 One of the biggest traps in MLB DFS can be the hot streak. Take Cedric Mullins, for example. He has 12 hits, three home runs, four RBI, and seven runs in just his last five games – raising his batting average 27 points. Is this the real Mullins? What about the previous 13 games where he had just 11 hits, no home runs, and two RBI and his batting average dropped 18 points? There is plenty of research that shows the concept of a hot streak in baseball is real, but one 0-for-4 game can quickly pour some cold water on that idea. Be sure when you play DFS, you are paying for the potential production, not past successes. Analyze the viability of the streak continuing before your stack or fade list.

The first full week of June starts with an odd three-game Monday slate that both seems too small for cash games and too shallow for tournament pivots, plus offers a tricky set of pitchers. Things will get back to normal with a full slate on Tuesday, so let’s look at what might be signal and what might be noise as we build our rosters this week.

Miami Marlins (vs. COL) – Can you name four of the typical eight batters in the Marlins’ lineup? Likely not, which usually makes them a perfect DFS target in the right environment. This just might be it in the first half of this week.

We, unfortunately, don’t get to roster the Fish sticks in Coors this week (mmmm, fish sticks), but the good news is the Rockies pitchers are contractually obligated to make the road trip with the team down to Florida. That means we get some Antonio Senzatela, Austin Gomber, and the Chi-Chi-Jazz matchup we’ve all been dying to see when Jazz Chisholm squares off against Chi Chi Gonzalez.

Even with the caveat that half of their games are at Coors, this is an abysmal pitching staff for the Rockies. They rank last in K/9 this year (7.90, the only team under 8.0), 26th in BB/9 (3.91), 29th in SIERA (4.52), and 28th in hard contact allowed (34%). The Miami trio of Adam Duvall, Jesus Aguilar, and Garrett Cooper have been early surprises along with Chisholm, as each carries a hard hit% of greater than 40% this year. These guys make for a fantastic fish stack.

Seattle Mariners (@DET) – I try to avoid recommending teams like the Dodgers or the Red Sox in this section because, well, you know they’re good and they are going to continue to be good. But, Seattle? The stars are really going to have to align for me to recommend Kelenic and the Whiff-masters but I think I am going to find myself getting there in secondary stacks some this week.

First up for the Mariners will be Matthew Boyd who has seen his career plummet the past couple of seasons. He has almost hit rock bottom this year with a 4.53 SIERA (60th out of 66 qualified starters) and a K% at a measly 19.5% (55th among starters). I do think Casey Mize and his elite cutter (third-best pitch value on Fangraphs) can have some success on Wednesday, but Seattle will likely see a spot start by Tyler Alexander on Thursday with his dangerous combination of a hardhit% of 38% and fly ball% of 40%.

The Mariners just scored 16 runs in three games against the Angels, so in the right circumstances, they can provide low-dollar production stack allowing us to save some of our funds for the elite plays.

Toronto Blue Jays (@CHW) – The White Sox pitching staff is quickly becoming one to steer away from when building DFS lineups, so much so that it makes me seriously considering a fade on the Blue Jays, one of the majors’ most potent offenses.

Toronto may be able to smash Dallas Keuchel on Thursday, but they have to get through Carlos Rodon and Lance Lynn to get there. Is Lynn having the most under-the-radar elite season ever? Overshadowed by Jacob DeGrom’s otherworldly performance, Lynn is having a Bob Gibson-esque campaign of his own with a 1.23 ERA and top-10 numbers in WHIP (0.92) and hard contact allowed (24.3%).

It’s hard to say a pitcher who has a no-hitter this year is overlooked (but then again, who doesn’t have a no-hitter this year), but Rodon can barely escape the Dylan Cease/Lance Lynn/Lucas Giolito shadows on his own team. Carrying an elite, top-10 barrels per plate appearance allowed rate this year, Rodon is producing career-highs across the board and has only allowed more than one earned run twice this season.

Minnesota Twins (vs. NYY) – This is about much more than a scary matchup against Gerrit Cole on Wednesday. The Yankee young guns (not named Jameson Taillon) have been doing an excellent job keeping the Bronx Bombers alive in the playoff race and now face a team that has fallen behind the Indians, Royals, and Tigers in the division standings.

Among just starters in the majors this year, the Yankees have the sixth-highest K/9 in 2021 (9.87) and the fourth-best walk rate (2.38 BB/9). Considering the chewing gum and duct tape holding this pitching staff together, the Yankees brass surely couldn’t be happier with the results. Both Jordan Montgomery and Michael King (Tuesday and Thursday’s starters) are averaging over 8.0 K/9 and have a FIP under 4.20.

Target Field ranks only 21st in park factor this year, including 22nd in home run park factor. Reducing the likelihood of a home run helps eliminate one of Cole’s kryptonites, and minimizes the possibility of the big inning which sometimes can doom Cole when he gets runners on base.

Houston Astros (@BOS) – If any advice in this piece is likely to turn around and bite me in the backside, it’s this one. Let’s take a look at why: 1) The Astros are facing Boston, which is no problem except their offense ranks top-10 in SLG, OPS, wOBA, and wRC+, 2) Houston is headed straight into the teeth of Green Monster, with these three games at Fenway Park, and 3) these two teams just saw each other in Houston so there is some short-term familiarity.

Now consider the corollary. Framber Valdez and Zach Greinke just shut down the Red Sox and Blue Jays, respectively, allowing two runs between them in their 16 innings against two top offenses. I’m not at all interested in rostering Jake Odorizzi on Wednesday in this matchup, but I will certainly be invested in Valdez and Greinke on the bookends in what is likely to be extremely low ownership.

Of the two, Valdez looks the most appealing to me, even on the road. If you look at the Boston offense against lefties this year, some of the shine starts to come off. They rank only 15th in wRC+ against left-handed starters (102). Those pitchers neutralize some important bats like Rafael Devers and Alex Verdugo which causes Boston’s slugging against lefties (.422) to tumble 25 points as opposed to right-handers (.477).

Toronto Blue Jays (@CHW) – Looks like we get the rare full-team fade for the Blue Jays to start the week. We already looked at why we don’t want the bats against the Pale Hose pitchers, and now it doesn’t look any better for the Blue Jays when they are on the field.

The White Sox are essentially lapping the field when it comes to production against left-handed pitchers this season, and they are about to face two who usually end up being relatively popular in DFS – Robbie Ray and Hyun Jin Ryu. Chicago leads the majors in wRC+ (133), SLG (.472), and OBP (.358) against lefties and also come in sixth in BB/K%.

Especially at Guaranteed Rate Field (third in park factor for home runs this year), this looks like a stay away spot for not just Ray and Ryu, but also rookie phenom Alex Manoah as well. When it comes to this series, just stack the White Sox and print money.